Below is a look at some of the work going on around town folks on bikes should be aware of.

City starts work on Burke-Gilman improvements near U Village

We already told you about the city’s planned crossing and access improvements to the Burke-Gilman Trail near the U Village. Well, the city has already broken ground on the new sidewalk connections on 30th Ave NE:

The biggest improvements trail users will notice are a new raised crosswalk at 30th Ave NE and a bike-and-walk-only signal phase at 25th Ave NE. There will also be a new cool bike leaning rail at 25th.

The city will begin major work on the trail in early January. So be prepared for delays in the area.

The city will install a new peak-only bus lane on 9th Ave N to help Metro’s route 40 get through congestion on the way into South Lake Union, Seattle Transit Blog reports.

Unfortunately, plans do not currently include a bike lane to help people coming from the Westlake parking lot and heading into downtown. This bike lane is noted in the Bike Master Plan, but City Traffic Engineer Dongho Chang said they are planning “thoughtful connections” as part of the ongoing design for the Westlake bikeway.

Here’s what that recently-reconstructed area looks like today. Building this unfriendly car-choked street just years ago was a big missed opportunity to make this street work better for everybody.

Be prepared for work this week to close the curb lane on Dexter as you approach Nickerson from the south. The city is extending the existing bus pad (essentially paving part of the planting strip) so that it serves both the front and back doors of buses. Today, only front door users get a dry spot to step off the bus. What it looks like today:

Unfortunately, it is not a bus island like other bus stops on Dexter. When work is completed, the bus and bike interactions will be the same as they were previously (except that bus riders will have slightly less-muddy shoes). 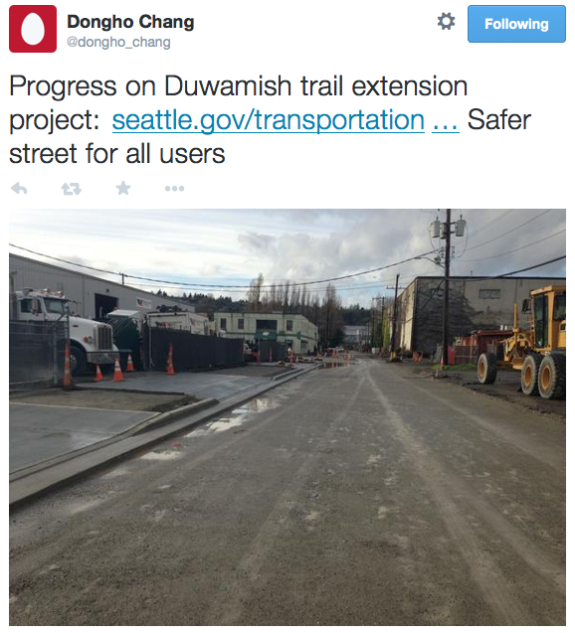 This street may not look like it is in very good shape, but this stretch of S Portland Street may never have looked so good. Before work began on a project to repave the street and add a bike/walk trail, this stretch of Portland St was probably the worst-paved street in the entire city.

Once complete, there will be a trail connection to the Duwamish Trail along S Portland, connecting into the heart of the South Park neighborhood. The project should be substantially complete in mid-January. Here’s a map of the trail connection: 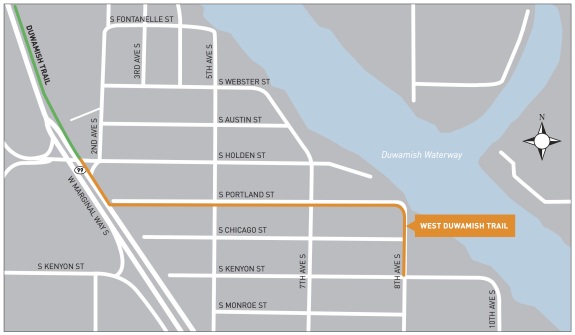 Founder and Editor of Seattle Bike Blog.
View all posts by Tom Fucoloro →
This entry was posted in news and tagged construction, seattle transit blog. Bookmark the permalink.