Well, that didn’t last long. We reported earlier this week on the University of Washington’s efforts to improve safety where the Burke-Gilman Trail crosses Pend Oreille Road by adding stop signs for cars about to cross the trail’s crosswalk.

After some traffic backups on 25th Ave NE during peak travel times, the UW is pulling the plug on the idea and taking out the stop signs, reverting the intersection to its previous dangerous and confusing state (as pictured above), the UW announced Friday.

The number of people biking and walking on trail is high enough even in rainy November that too few cars were able to get through the crossing, leaving a line of people waiting to make left turns from 25th to Pend Oreille. This was seen as unacceptable, so they are going back to the drawing board to find a different solution.

The problem (if you want to call it that) is that people on the trail want to treat the crossing like any other mid-block crosswalk, where cross traffic is required to yield. But Kavanagh and UW transportation would like it operate more like a typical four-way stop intersection with all directions taking turns.

However, people are not accustomed to treating crosswalks this way, and most people continued to enter the intersection as though they have the right of way (which, since there’s a crosswalk, they do). This gave people driving on Pend Oreille waiting at the new stop signs too few chances to get through, causing the backups.

Unfortunately, UW is relying on a minimal design in a slow-to-adopt national road design manual that leaves a lot to be desired in terms of prioritizing the safety and movement of people on foot and bike:

This is the design guide from the MUTCD that UW is following. We can do better.

While the image above does not picture a zebra-stripe crosswalk, Kavanagh said he is “hesitant to remove the crosswalk” markings currently there. That certainly seems wise.

The core “problem” here is not that it is a crosswalk, it’s that too many people are biking and walking. That’s a fantastic problem to have, and one that should be supported rather than fought. These are not glitches in the traffic system, they are human beings getting around on foot and bike, an activity the University claims to want more of. They are not impeding traffic, they are helping it by not being in a car in the first place. They are also helping UW meet its commute reduction goals.

I have suggested that rather than fighting people’s natural inclination to treat the intersection as a normal crosswalk, the UW work with it to design a crossing that clearly gives the trail priority and makes sure sight lines are unobscured and lighting is bright enough that people driving, biking and walking can all see each other. One excellent way to do this would be to turn the intersection into a raised crosswalk like the one planned at 30th Ave NE. Another way would be to get rid of the stop signs currently facing the trail, which only add to confusion about who actually has the right of way.

If traffic continues to back up, Kavanagh said the UW is opening talks with SDOT about the potential to retime the signal on 25th to help more people get through. 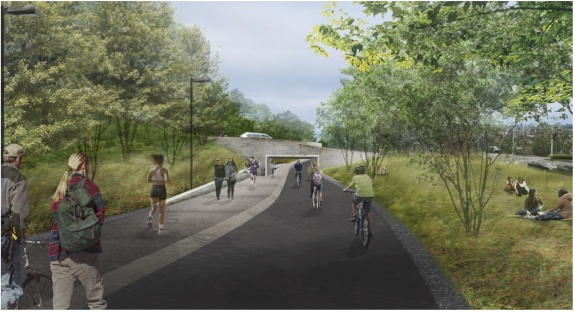 If traffic flow is really a big enough problem, then the UW needs to pony up the cash for a more significant crossing option, like their currently unfunded plan to grade separate the crossing. Otherwise, they could install a traffic signal, though preferably one like this where the trail has the green by default unless a vehicle triggers the light (far more people use the trail than Pend Oreille, so signal priority makes sense).

But anything that would reduce safety for trail users 24 hours a day just to slightly improve traffic flow for one or two peak hours a day would be a big mistake. This is one of the busiest trails in the entire nation. At peak, it carries as many people as a lane on a freeway. It is a major success as a piece of transportation infrastructure.

The UW should not be looking backwards to designs that meet barely acceptable minimums for much lesser trails. The Burke-Gilman is a national leader, and its design should be innovative, safe and intuitive. There’s no need to fight the trail’s success and treat it as a problem. Instead, observe how people naturally want to move through the space and create a design that allows that to happen safely.

Here’s the press release from UW:

Over the last week, the intersection of the Burke-Gilman Trail and Pend Oreille has featured a four-way stop as part of a traffic study to explore permanent reassignment of right-of-way. The study has been revealing. Since the stop signs were installed on Pend Oreille, automobile queues have been longer than modeling predicted and the delay extended onto 25th Avenue NE as motor vehicles were unable to complete turning movements to Pend Oreille – sometimes for multiple signal cycles.

The results have proven this treatment unsuccessful, therefore, we are returning to an intersection configuration consistent with the prototypical multiuse path crossing in this illustration from the Manual on Uniform Traffic Control Devices (MUTCD):
http://mutcd.fhwa.dot.gov/htm/2009r1r2/part9/fig9b_07_longdesc.htm

As the diagram and associated specifications indicate, the four way stop is a suitable treatment when conditions support it, and that option may be reconsidered pending signal improvements at 25th and Pend Oreille. We will also consider a range of other treatments as we expand our study of interim improvements that can improve safety for all users.

In pursuit of a permanent solution, we are seeking funding in the regional mobility grant competition that would allow us to grade separate this intersection. Those funds are subject to award by WSDOT and appropriation by the Washington State Legislature. For the current updates on this process, please subscribe to our Burke-Gilman Trail mailing list.

If you have questions or concerns about this change in navigating the Burke-Gilman Trail, please don’t hesitate to contact Transportation Services at [email protected]. Thank you for your patience as we adapt to address safety and functionality at this key intersection and campus entrance.