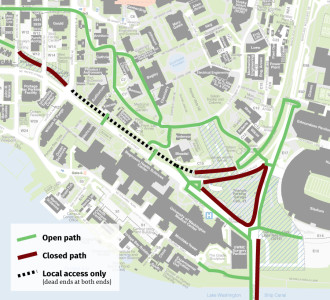 During peak commute hours, the Burke-Gilman Trail through UW campus carries 1,200 or so people every hour. So it is more than a little bit crazy that the ever-changing detours are so confusing even regular trail users and people familiar with UW campus are getting lost along the way.

People have been frustrated by the confusing detours, but it’s not really the detour team’s fault. The problem stems from the core decision to avoid the obvious best detour option: A temporary trail on Montlake and Pacific.

Both major streets (Montlake is actually a state route) are very wide and follow the trail’s general path. And since biking and walking is vital to keep people moving through the congested area during construction work (we don’t want people ditching their bike and joining the congestion, right?), it only makes sense. Here’s the Seattle Bike Blog proposed detour trail:

But that’s not the only big problem facing trail users this summer. In order to take advantage of UW trail work, Seattle City Light is burying extra power lines along the trail right-of-way between the substation near I-5 and UW campus. Much of the work will coincide with already-planned trail closures on campus, which is smart. But they also need to work on the section of trail between campus and I-5, and that means more trail detours. The work will be done in phases starting soon on UW campus and continuing until the end of 2014.

The next phases will start after about eight weeks and will last for about two to three weeks each. The detour will be along NE 40th St. City Light will install ADA ramps at the intersection of 6th Avenue NE and an asphalt pathway west of the 6th Ave NE for pedestrians. Bicycles will be on the street. The detour plans are already approved by SDOT.

Here’s a map of the planned detour (see all phases in this PDF):

I don’t know how this got approved, but this is not acceptable. You simply cannot send people — many of them children and people brand new to biking — from a major separated trail into mixed traffic on streets like Pacific and NE 40th without creating a temporary safe facility: 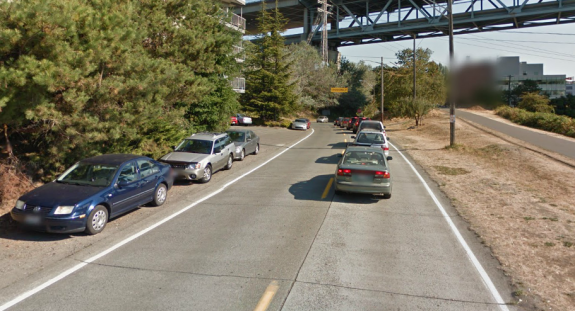 Pacific just west of NE 40th. The trail at right will be closed this summer. Image from Google Street View

I can only assume this was an oversight that will be corrected before the work begins this summer. I asked City Light and SDOT if they were totally sure they did not have plans for a temporary trail, but it appears they do not. It’s frustrating that I even need to write this post to point out that it is not OK to detour an extremely popular all-ages-and-abilities biking and walking trail into mixed traffic.

Perhaps this is the city’s chance to not only fix this detour plan, but also fix their processes so that such obviously inadequate and potentially dangerous detours are not approved in the future.