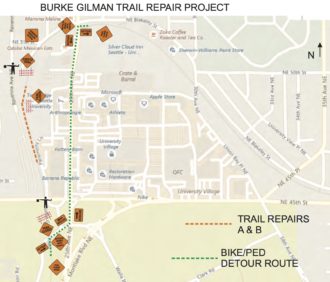 UPDATE 11/30: The trail is now open, according to Project Manager Sandi Albertsen. Thanks to friendly weather, crews were able to complete the majority of work two days ahead of schedule. There is still some shoulder work to finish, but they should not impact trail use significantly. Be patient if crews are working, of course.

When the Seattle Parks District announced work to repave some very bumpy sections of the state’s busiest biking and walking trail, I said the news “will surely come as a huge relief to the many people who battle abrupt tree root heaves on the Burke-Gilman Trail.” The investment seemed to finally catch up with the reality that the Burke-Gilman Trail is a vital transportation connection in addition to being a linear park.

So like the many readers who contacted us in recent days, I was dismayed to see that the detour for a tricky section of trail just west of U Village sent trail users onto busy five-lane 25th Ave NE for about a half mile. This street has no bike lanes, and crews did not create a temporary bikeway on the street to help trail users make the trip safely and comfortably.

The Burke-Gilman Trail is a very important non-motorized transportation connection. At peak hours, sections of the trail near UW move about as many people as a lane of a traffic-clogged freeway (though volumes are lower in the fall and winter). The trail attracts people of all ages, abilities and confidence levels, many of whom do not feel safe or comfortable biking in busy traffic (really, very few people do).

This detour not only puts these users in danger, but it also tells them that the city does not take their needs or safety seriously. If the current detour selection and approval process allows this huge oversight to happen, then Seattle needs to fix the process.

I have questions out to Seattle Parks and will update when I hear back.

UPDATE: Project Manager Sandi Albertsen says the 25th Ave NE route was chosen because “there weren’t any good alternatives.” The work should be complete by Friday.

There was a concept for a different detour, but it would have required two weeks to create since it needed some new ramps and other work. Since the work timeframe is relatively short at two weeks, Parks, the contractor and SDOT’s street use team determined 25th to be the best option.

“As soon as we can, we’re going to open that section of trail back up,” Albertsen said. However, no detour improvements are planned beyond some better signage.

“I realize that [the Burke-Gilman Trail] is like the I-5 for bicycle commuters,” she said. All they can do is “apologize and ask for patience … We’ll be out of there before you even know it.”

Frustratingly, this is just the latest case of such an oversight (remember the Wallingford fiasco?). There is no standard practice at the city for making sure a comparably-safe detour is provided during trail work, leaving it up to concerned residents and advocates to lobby the city for basic accommodations every time a new construction project is started. Sometimes poor detour plans can be fixed before they go into action, but not this time.

UPDATE: Seattle Parks confirms that this detour plan was approved by SDOT’s Street Use Department, which granted the permit November 3. While it would be great in a perfect world if every contractor and department that works in the city fully understood the need for proper trail and bike lane detours, the Street Use Permit process is the best place for issues like this one to get caught and fixed.

In this case, for example, the Street Use team could have flagged the difference between the existing facility type (a trail) and the detour’s planned route on a busy street with no bike lanes. They could then be ready to suggest ways to temporarily provide a comparable level of protection, such as a temporary trail on 25th Ave NE (an idea Albertsen said never came up in the detour discussions). Or at least, they can direct the applicants to expert resources they may need to find a solution.

Nobody wants to endanger people, but not everyone is going to be well-versed in the options for non-motorized detours. If there is a place in the city’s process that can prevent this from happening again, it’s the Street Use Permit process. SDOT leaders should make this a short-term priority.

The solution could be rather simple. If there is no way to provide a safe way through the construction site itself, crews could line the westernmost lane of 25th Ave NE with cones or a barrier to create a temporary bikeway. This would leave the sidewalks open for people walking and provide a mostly-separated space for people biking. This detour would have the interesting positive side-effect of improving biking and walking access to U Village during the holiday shopping season. 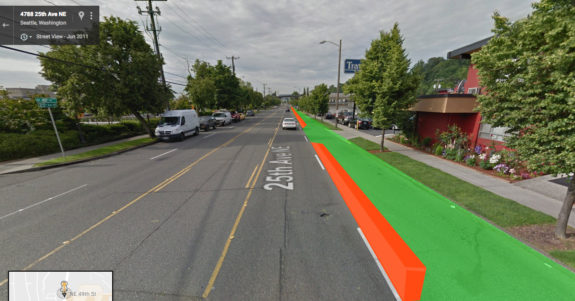 Rough outline of where a temporary trail on 25th Ave NE could go (not an actual design). Base image: Google Street View.

People using trails don’t simply disappear when trail work happens. They need a safe way to get around the work area. Safety must be the top priority when creating a detour plan. Right now, it isn’t. It should not require public outrage to get safe trail detours. It should just be standard practice.