UPDATE 7/8: WSDOT announced Friday that this closure is being put on hold so the team can rethink how the trail detour will work. From WSDOT:

The planned closure of the Burke-Gilman Trail through Seattle’s Fremont neighborhood on Monday, July 11 is postponed. WSDOT will work with the bicycle community, the City of Seattle and others on next steps to provide passage for bikers and pedestrians near the Aurora Bridge work zone. 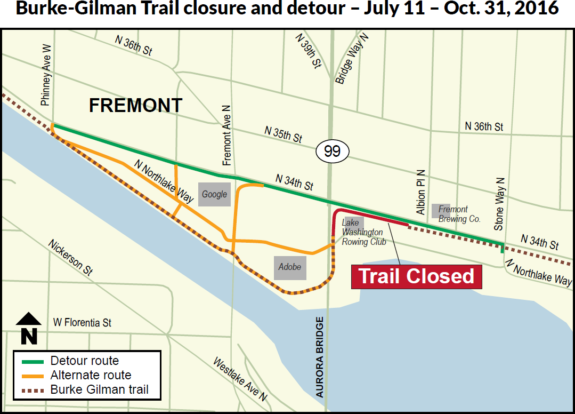 WSDOT will close a very busy section of the Burke-Gilman Trail in Fremont starting Monday and extending until Halloween.


Crews will stage equipment on the trail as part of their ongoing Aurora Bridge painting project.

Detour plans do not include a temporary trail or bikeway. Instead, plans call for trail users to be detoured to N 34th Street between Phinney Ave and Stone Way. The busy section of N 34th Street between Stone and Fremont Ave has paint-only bike lanes, which are often impeded by backed-up turning traffic or nearby construction.

When asked how this detour was chosen, WSDOT’s Kris Olsen said Seattle’s DOT advised it.

WSDOT and the contractor consulted with the city of Seattle, which advised us that 34th is its approved and standard detour route when closures are necessary on the trail in this area.

There are no plans for a temporary trail or to add protection to the existing bike lanes on N 34th Street, though there could be a chance for improvements:

There are no plans for a temporary trail. The city did not require additional layers of protection on 34th. If you have some thoughts on that, we’d certainly consider and consult with the city whether they’re needed and could be implemented.

Olsen said the city is looking into intersection timing improvements at Stone Way. Something like an all-way phase for people walking and biking would be a huge help for westbound trail users trying make the difficult diagonal crossing from the trail to the N 34th Street bike lane, for example. 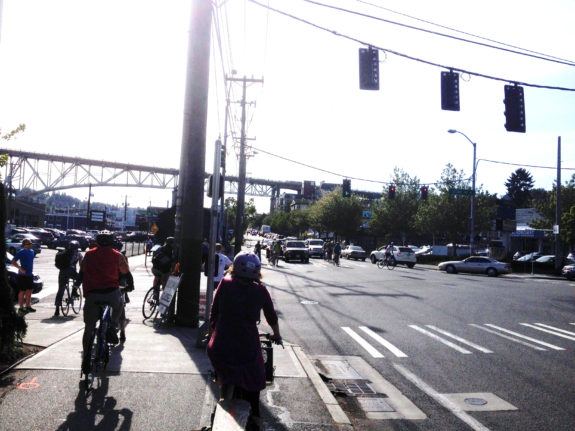 Facing west on the trail. It’s difficult for groups of people to make the diagonal crossing at this intersection to reach the N 34th Street bike lane.

The most obvious solution here is to route a temporary trail through the parking area or on Northlake Way between Stone Way and the trail crossing under the Aurora Bridge. Northlake “was not considered because it is narrow with no bike lanes,” said Olsen. “That said, there won’t be any barriers in place to prevent someone from using Northlake for a short distance and rejoining the trail at the building located at 1000 N. Northlake Way.”

However, there appears to be plenty of room there for a temporary trail: 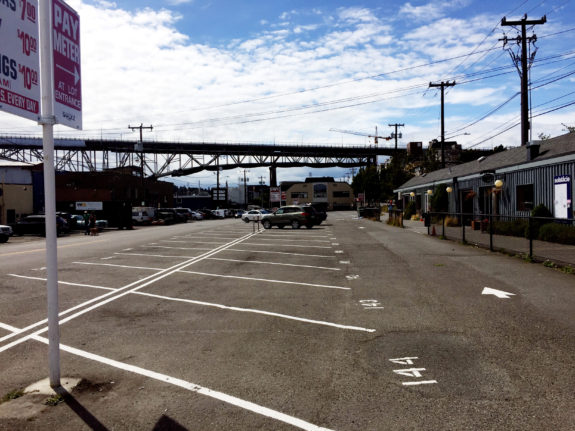 Even if the parking area is not an option (it is owned the Fremont Dock Co, not the public), Northlake Way could become a one-way street during construction, creating space for a temporary trail.

Alternatively, the state could help the city expedite the Bike Master Plan’s call for protected bike lanes on N 34th Street, though Monday is a pretty tight timeline for that much work (why more notice for such a big closure would be useful).

The Burke-Gilman Trail is a family-friendly, all ages and abilities bike route. N 34th Street is not. Kids bike on the Burke-Gilman Trail. So do people who are just getting started biking or who are nervous about biking near traffic. This is especially true during the height of summer.

People who are experienced at biking and know the area well will certainly just bike down Northlake. But others could be lost and confused (“They don’t want me to bike on that busy street, do they?”).

Failing to provide an adequate detour of such an important trail sends a clear message that the city and state just don’t value trail users. If they did, a detour of comparable comfort and safety would be provided during such a construction closure. Thousands of people use this stretch of trail every day, making it among the busiest sections of trail in the state. This isn’t just any ol’ trail.

The good news is that a short, temporary trail is very easy to create in this situation. It’s the obvious solution here, and planners should make sure it or something of comparable safety is in place before the trail closes: 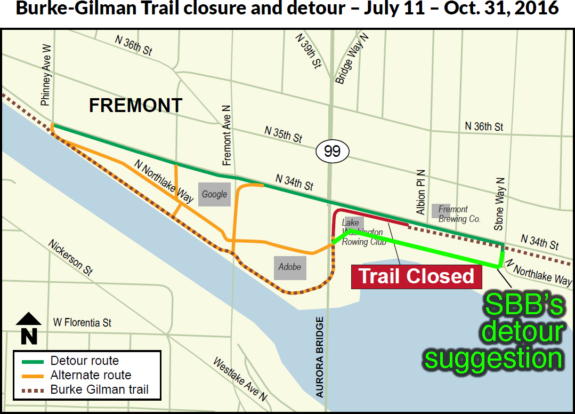 This project should also be the kick the city needs to finally build the planned (and spray-painted) bikeway connection from the bridge to the trail west of Fremont Ave. That will be more important than ever during this construction so no more time for delays.

Founder and Editor of Seattle Bike Blog.
View all posts by Tom Fucoloro →
This entry was posted in news and tagged burke-gilman trail, fremont, wsdot. Bookmark the permalink.