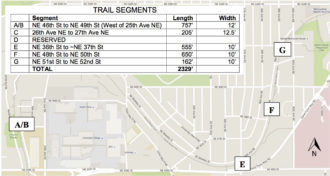 Map of (some) of the planned trail repairs. See more on the project website.

This will surely come as a huge relief to the many people who battle abrupt tree root heaves on the Burke-Gilman Trail in the U District, U Village and Laurelhurst area: Seattle Parks will start repaving sections of the trail Monday.

The five sections are scheduled for work over the next couple months moving from east to west. Detours will be provided where needed, but give yourself a little extra time just in case.

The work is part of the city’s effort to catch up on a long deferred maintenance backlog in Seattle parks, as promised to voters when they passed the Parks District measure in 2014. In addition to being a vital transportation corridor, the Burke-Gilman Trail is one of the city’s iconic parks. But many sections have not received serious attention since they were first paved decades ago.

Repairs to five sections of the Burke-Gilman Trail that runs through the University District will begin on Monday, Nov. 7. Seattle Parks and Recreation (SPR) awarded the construction contract for repairs to Westwater Construction. Work is scheduled to be completed in early 2017. This project will repair sections of the trail, remove areas of asphalt in disrepair, remove invasive roots that are causing upheaval, and replace those sections with new asphalt. Trail sections were determined by 2015 condition-assessment work done in collaboration with Seattle Department of Transportation.

Cyclists and pedestrians will be detoured around the construction area onto side streets. The contractor will work on one section at a time, from east to west, to reduce the impact to trail users. Please visit www.seattle.gov/parks/about-us/current-projects/burke-gilman-trail-repairs for more information about the detour routes.

SPR will also perform small asphalt repairs on the Burke-Gilman Trail in November between Gas Works Park (Meridian Ave. N) and the I-5 bridge, and may require cyclists to dismount and walk around repair work (no detour route will be required).

The Seattle Park District provides $500,000 in funding for this Burke-Gilman Trail improvement project. Approved by voters in 2014, the Seattle Park District provides more than $47 million a year in long-term funding for Seattle Parks and Recreation including maintenance of parklands and facilities, operation of community centers and recreation programs, and development of new neighborhood parks on previously acquired sites. 2016 is the first full year of implementation and will include funding to tackle the $267 million major maintenance backlog; and will fund the improvement and rehabilitation of community centers; preservation of the urban forest; major maintenance at the Aquarium and Zoo; day-to-day maintenance of parks and facilities; more recreation opportunities for people from underserved communities, programs for young people, people with disabilities, and older adults; development of new parks; and acquisition of new park land.

18 Responses to 11/7-Early 2017 Trail Alert: Burke-Gilman getting much needed repairs east of UW