City’s plans for a Westlake bikeway continue to evolve

Images from an SDOT presentation to the Design Advisory Committee (PDF).

Plans for a safer and more comfortable Westlake Avenue continue to develop, and the city is now looking at two options: One that runs next to the existing sidewalk and one that runs down the center of the parking aisle. A previously-considered option along the west edge of the parking area has been dropped.

The city will continue developing the plans this summer and will present a workable project concept at an October 22 open house. If all goes according to schedule, construction will begin at the end of 2015 and the bikeway will open in 2016.

Planners updated the Westlake Design Advisory Council this week to show the evolving plans and gather feedback. The city will pick their preferred plan based on feedback and the project goals later this summer.

The sidewalk-adjacent bikeway plan still shows the most promise, providing the fewest points of conflict and displacing the fewest parking spaces. The city has improved the idea since first presenting “Concept B” earlier this year by removing some of the twists and turns that some feared would make it less usable. 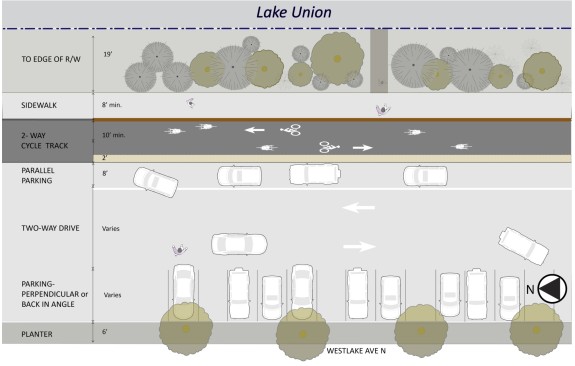 Much of the work on this plan has already been completed, since it will utilize the existing service drive between the storefronts and the giant, endless parking lot. The service lane will be converted into a two-way bikeway separate from both the parking lot and the sidewalk. This option also puts the bikeway closer to the water and with more direct access to storefronts.

Feedback earlier this year on the similar “Concept B” plans included concerns that there were too many turns in the routing. Some of those turns appeared rather abrupt, prompting usability and safety concerns for people biking on it. The improved plans straighten the bikeway to address many of these issues and make the route more predictable.

Though materials from project planners note that the width of the bikeway will be ten feet at a minimum, much of the route will be wider than that. Here are the pros and cons from the presentation to the Design Advisory Committee:

The Center Concept is an interesting idea raised by community members during the most recent open house. Basically, it would create a protected bikeway through the center of the main parking area, surrounded on either side by one-way drive lanes and back-in angled parking.

This option more or less makes official the way people bike through the lot today: Right down the middle between rows of parked cars. But the barriers should give users a sense of safety and comfort they don’t have today, where the threat of being hit by a car pulling out of a parking space is daunting. 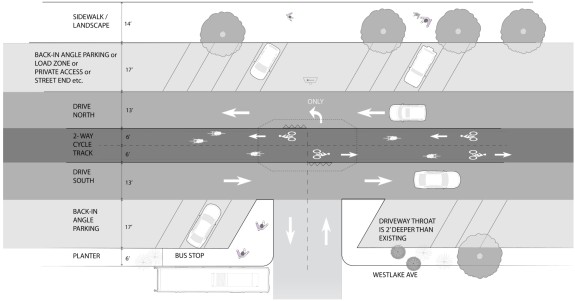 However, this option has more points of conflict than the Sidewalk Concept, since cars will cross the bikeway at every driveway. This option also could lead to conflicts with people making u-turns to snag a parking spot they saw on the far side of the bikeway.

And while it does keep the existing service lane essentially as it is, the center concept would displace more parking spaces than the Sidewalk Concept. Here’s the pro and con list from the presentation:

Here’s a map comparing the alignments of the two options (click to enlarge): 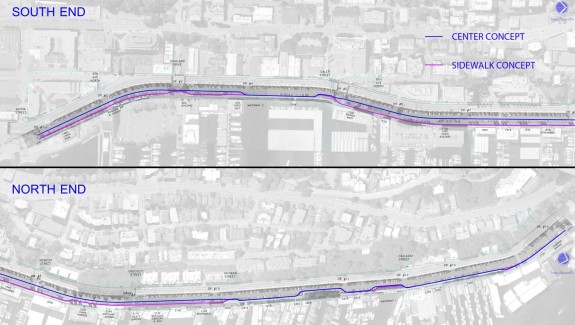