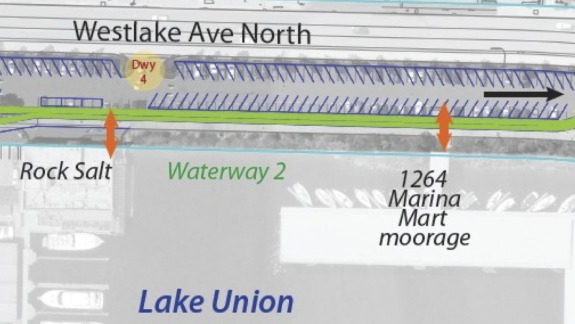 The city is just about ready to show off its design for the Westlake Bikeway after many community meetings big and small and more than a year and a half of debates about the plan to provide a safe space for people to travel between South Lake Union and the Fremont Bridge through the giant, endless parking lot along the edge of the lake.

It’s been a long and messy road, and the city has brought a whole lot of people to the table to express concerns, propose alternative ideas and guide the design. The result is a safer, protected bikeway along the eastern edge of the parking lot and a redesigned and more efficient parking area tuned to the success of businesses rather than acting as free all-day parking for city center employees trying to get around paid parking at their workplaces.

You can check out the plans and give SDOT feedback during an open house from 5:30 – 8 p.m. Wednesday at Fremont Studios (35th and Phinney). The presentation starts at 6:15. There will be activities for kids, so bring ’em with you.

And despite all the meetings the city has already held, people still need to show up and support a safer Westlake for everyone. The exact design the city plans to unveil Wednesday is not yet clear, but a recent presentation to the Design Advisory Committee gives a hint of what to expect:

The project includes bike lanes in each direction (often next to each other like a trail) that are separate from the sidewalk and the car parking area. A redesigned parking area includes a lot of back-in angle parking, which makes more efficient use of the space to squeeze as many parking spots as possible into the area. As a result, the city expects that 80–85 percent of the spots will be preserved. A new circulation pattern in the drive area will prevent people from driving or biking from end-to-end of the parking area by having some sections one-way northbound and others one-way southbound.

In my opinion, the project includes too much concern for parking preservation and misses chances to create new creative public spaces and wider sidewalks. But I suppose that’s what compromise looks like. The city has done a much more extensive effort to reach out to everyone impacted and get their concerns on the table, and the result is a project that’s shaping up to be a win for everyone.

Unfortunately, despite all the compromises and design efforts to preserve the vast majority of parking spaces in the city-owned lot, there are still people who are against any parking loss of any kind even if it improves safety for all users. The so-called Westlake Stakeholders recently put out a call to get a bunch of people to show up, trying to scare people by making outlandish claims like that the project will lead to “1,000’s of pedestrian/bicycle conflicts daily where 100% of all pedestrians will have to cross over the east sidewalk cycle track to access their business, residence and marinas.”

Thousands! Judging by that description, you might think the city were proposing a moat of lava rather than a space for people to ride a bike. But, of course, the claim is not true at all, unless you define every instance of a person walking across a bike lane to be a “conflict.” To recap: People walking across a parking lot drive lane is not a problem. But people waking across a bike lane? “Conflict.” This is just the latest attempt by this group to mislead people into getting riled up about what is really a very common sense solution to a safety problem.

The official project schedule notes that Wednesday is supposed to be the final open house on the project. After this, SDOT will finalize the design and get it ready for construction starting in the fall of 2015. The city already has $3.6 million from a mix of city and Federal grant funds to make the project happen, but more funding will likely be necessary. 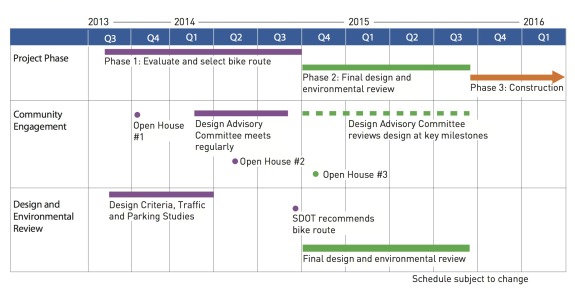