Times: Seattle is second safest big US city for walking and biking 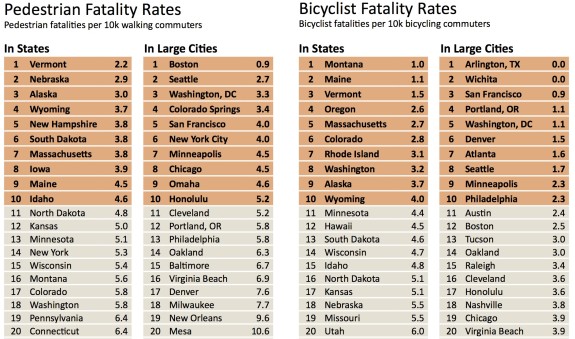 Figures from the 2014 Alliance for Biking & Walking Benchmarking report

As you sprint across a highway-style four-lane street through the heart of your neighborhood, it’s probably hard to believe that Seattle may be the second safest big city in the US for people walking and biking. But that’s what the data suggests, according to the 2014 Alliance for Biking & Walking Benchmarking report and the Seattle Times’ Gene Balk.

First, some caveats to the data: Because the walking and biking rate information comes from Census surveys, people who mix walking or biking with public transit are likely not counted in the walking and biking columns. Neither are people who walk or bike to work some days, but not always. And, of course, only work trips are counted. So a retired person walking to the grocery store would not be counted, either.

The way the Census question is asked, the data represents the mode of transportation people use for most of their commute trips “last week.” So all those people pouring into a New York subway probably don’t count in the walk column. Neither do all the people walking to a 3rd Ave bus stop in downtown Seattle. But the Census data is probably the closest estimate we have, and it’s definitely the only one that’s universal between cities.

When added together, Seattle has the fourth-highest walk/bike commute rate among large US cities. Yes, Seattle even ranks higher than Portland, which has a higher bike rate but a lower walk rate. As we reported previously, when you include all commute modes measured by the Census, Seattle is one of only five large cities where fewer than half of residents drive alone to work. 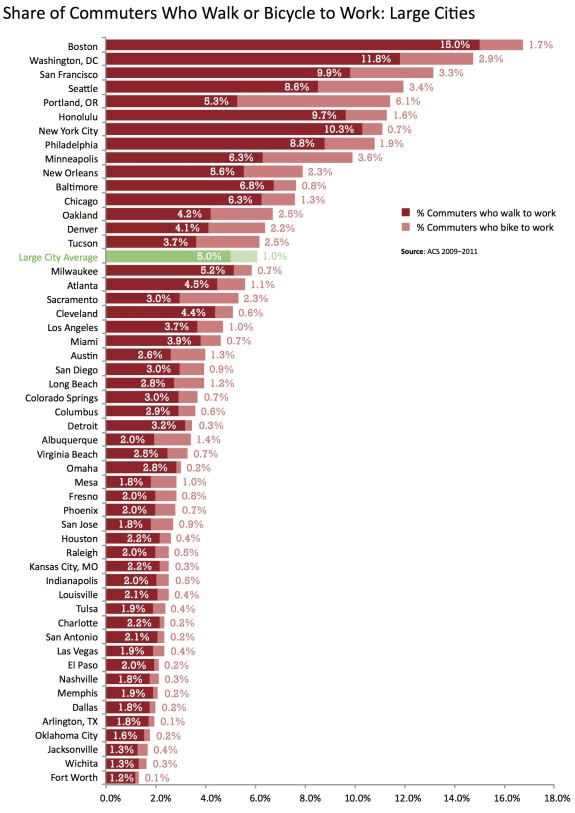 The most clear link to safety is the walking and biking rate in a city. The more people walk and bike, the safer walking and biking is for everyone. In fact, if you look at visualizations comparing bike/walk rates to safety, you can almost see the path to Vision Zero in which nobody dies in traffic:

Balk explains the safety in numbers effect this way:

In four of the five cities with the lowest fatality rates — including Seattle — the percentage of people who walk or bike to work is among the highest in the nation.  In Seattle, nearly one out of every eight workers is either a pedestrian or bicycle commuter; the 52-city average is just one out of every 20 workers.

The outlier is Colorado Springs, which has the fourth-lowest fatality rate, but also a relatively low level of pedestrian and bike commuting.

In all of the deadliest cities, there are very few pedestrians and very few cyclists. In Jacksonville, Fla., which has the highest fatality rate, less than 2 percent of people walk or bike to work.

And the fatality numbers are striking: in Jacksonville, pedestrians are killed at a rate 15 times higher, and cyclists 19 times higher, than in Seattle.

But as Balk writes, “While Seattle’s stats may be envious, more can be done to improve pedestrian and cyclist safety here.” This safety data probably does little to ease the heartache and immense loss felt by friends and family of Sandhya Khadka or Darren Fouquette or any of other people who have lost their lives while walking or biking on Seattle streets. In fact, it’s a bit depressing that the bar for walking and biking safety is so low in the United States that Seattle stands out as a leader.

The city has done a lot of smart things to its streets throughout the years to help lead to this safety rate, and there are a lot of smart plans rolling out at this moment. But the city is not moving fast enough. One death is too many, and the number of people seriously injured in traffic is much, much higher than the number who die. Until the city invests heavily in prioritizing walking, biking and ADA projects (and, of course, driving safety projects), Seattle will not eradicate the scourge of traffic violence.

It may take less work to get from Jacksonville to Seattle than to get from Seattle to Vision Zero. But it is work we must do.

Founder and Editor of Seattle Bike Blog.
View all posts by Tom Fucoloro →
This entry was posted in news and tagged 2014 Benchmarking Report, alliance for biking and walking, gene balk, seattle times. Bookmark the permalink.

19 Responses to Times: Seattle is second safest big US city for walking and biking