National report: Seattle is among the safest for biking and walking despite lacking infrastructure

Despite building few bicycle lanes, Seattle still stands out in a new national report as a walking and biking leader. In fact, we’re featured on the cover. 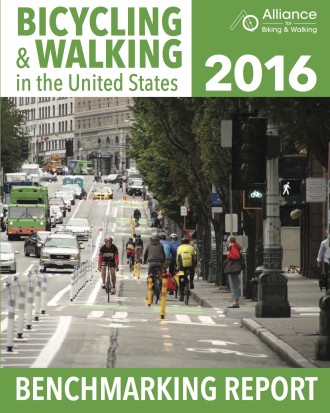 Images from the 2016 Benchmarking Report.

Both walking and biking to work has increased faster in Seattle than most other major U.S. cities, the report found. Across the country, as the number of people walking and biking increases, the fatality rate decreases. And Seattle is a leader in this trend: 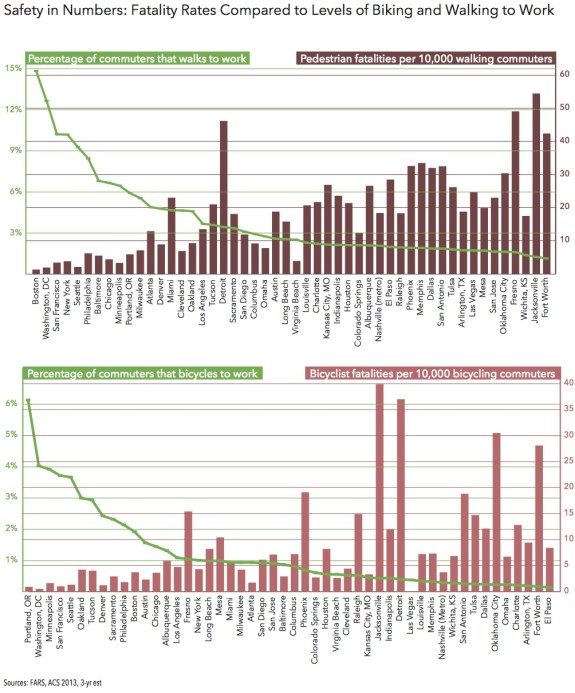 This data comes from the Alliance for Biking and Walking’s 2016 Benchmarking Report, which was released Wednesday (the report comes out every other year). It’s packed with data comparing major cities by a number of different measures. Seattle appears most consistently comparable to San Francisco and Washington DC in terms of biking and walking rates and safety.

But this high safety rating comes despite Seattle’s relatively low investment in bike lanes and paths. DC has 52 percent more miles of bike lanes per square mile than Seattle. San Francisco has 63 percent more. In fact, Seattle falls somewhere in the middle-to-low end of the list compared to major U.S. cities: 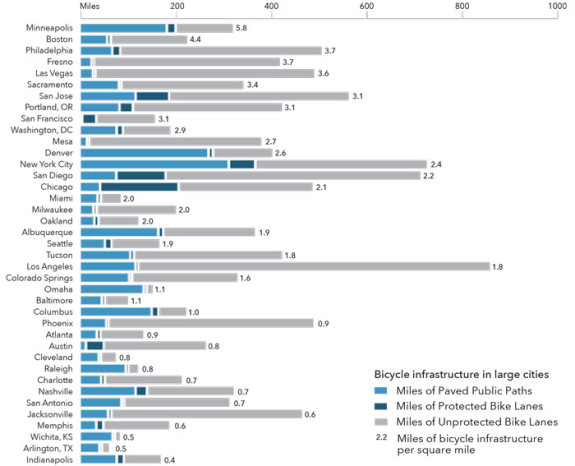 But with all the talking Seattle does about bike lanes, how could we fall so low on this list? Well, because we talk and talk, but rarely actually build. If this were a list of miles of bike lanes included in planning documents, Seattle would leave everyone else in the dust. But actually building bike lanes is the only thing that counts.

Now, just imagine what Seattle could accomplish by following through and getting our planned bike network — especially downtown — on the ground and fully connected. We have the plans, funding and political support. Now we just need action.

Seattle has a big head start on biking safety due to a culture of year-round biking that have developed and grown over decades. But we need safe and comfortable bike connections to become a true leader nationally and to achieve our goals of more and safer biking. We know it works when we build it, so let’s keep going.

As a reminder, here’s what Seattle could build within a year or two if leaders give existing and funded plans the go-ahead:

This entry was posted in news and tagged 2016 benchmarking report, alliance for biking and walking. Bookmark the permalink.

12 Responses to National report: Seattle is among the safest for biking and walking despite lacking infrastructure