Times: Seattle joins ‘select group’ of US cities where fewer than 50% of residents drive alone to work 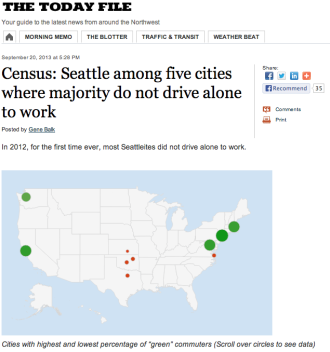 Screenshot from Seattle Times. Click for story and interactive map of low and high drive-alone cities

Seattle is one of only five large US cities where fewer than half of residents drive alone to get to work.

Gene Balk at the Seattle Times followed up on our Census reporting to note that by crossing this 50 percent threshold, Seattle joins a “select group” of car-lite American cities.

Among the 50 most populous US cities, only Boston (63.4%), Washington DC (65.9%), San Fransisco (66.9%) and New York (way ahead at 77.4%) have such a low percentage of working residents getting to their jobs by either carpooling, public transit, walking, biking or telecommuting. Seattle’s rate is 50.8 percent.

More from the Times:

As Tom Fucoloro pointed out over at the Seattle Bike Blog, new Census Bureau data show that last year, 50.8 percent of Seattle residents found some way other than driving solo to get to work.  In 2011, the Census Bureau estimated the number at 46.4 percent.

In crossing the 50 percent threshold, Seattle joins an elite “club.”

Among the 50 most populous U.S. cities, Seattle is now one of just five where the majority of workers take public transit, carpool, walk, bike, or have some means of commuting other than driving alone.

I think this is cause for a celebration of some kind. Anyone have any ideas? A block party downtown? Free concert at South Lake Union Park?

Founder and Editor of Seattle Bike Blog.
View all posts by Tom Fucoloro →
This entry was posted in news and tagged census, gene balk, seattle times. Bookmark the permalink.

29 Responses to Times: Seattle joins ‘select group’ of US cities where fewer than 50% of residents drive alone to work