Report: When it comes to bike/walk advocacy groups, Seattle is in a league of its own 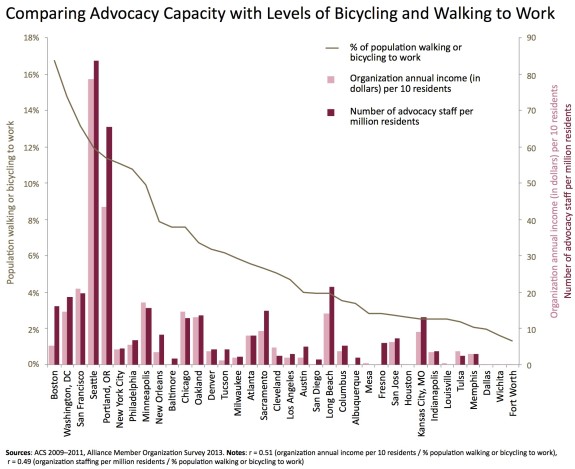 When it comes to advocacy organizations in the United States, Seattle and Portland have no peers. And even Portland is a distant second compared to the advocacy muscle in Seattle and the Puget Sound region.

The data comes from the national Alliance for Biking and Walking’s annual Benchmarking Report, which was released Wednesday. The report is packed with tons of data about how our nation, its states and its major cities are doing with regards to biking and walking safety and promotion.

But it’s the section on advocacy organizations where Seattle really stands out. If there really is an All-Powerful Bicycle Lobby conspiring to submit the United States to United Nations control (I wish I were making this up, but this is a claim made by an actual major party candidate for Governor of Colorado), then Seattle is the training camp for this shadowy army.

Joking aside, Seattle really is in a unique position to put private dollars to work trying out new ideas and encouraging more bicycling and walking. Cascade Bicycle Club claims to have more than 15,000 members, and its budget is fueled by a series of bike events that have become nationally-known classics. The annual Seattle-to-Portland ride draws 10,000 participants and sells out nearly six months in advance every year.

The report’s figures are not perfect. Certainly there are organizations not included that do work on biking and walking. There are also organizations that are listed that do lots of work not directly related to advocacy. But the figures are probably at least in the ballpark. The report does not break down the numbers into each individual group, and Seattle’s numbers represent the sum of Cascade, Bike Works, Feet First and Undriving. But Cascade and its 30+ staff members certainly make up a huge portion of the total. Here the data breakdown: 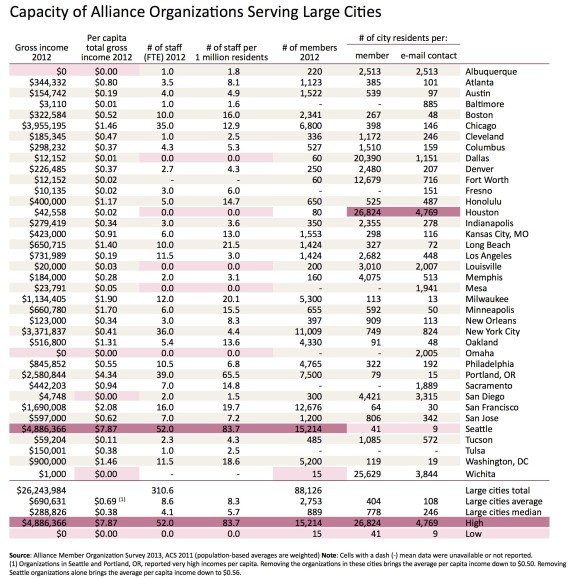 As you can see, Seattle bike/walk advocacy pitches a no-hitter. To put this in perspective, Seattle’s total advocacy group income tops even New York City and Chicago, which have far larger populations and very active advocacy organizations. On a per capita basis, Seattle’s $7.87 is almost not comparable to other US cities. For example, Los Angeles bike/walk advocacy organizations have a budget of $0.19 per capita.

Of course, this data is not all apples-to-apples. As both an advocacy and events organization, Cascade does not spend all its income on advocacy and education work. Events like big rides and the Bike Expo are expensive to put on. And Bike Works focuses its efforts on youth empowerment programming, which is advocacy work in its own way. But they don’t necessarily use their budget and staff to lobby government leaders (nor should they).

These caveats aside, the point stands: Seattle’s non-profit organizations dedicated to biking and walking can and should be leading the nation and taking chances on new ideas to encourage more people to bike and walk and — if it is their mission — to encourage leaders to invest in making streets safer.

That’s why we are keeping a close watch on Cascade as it rebuilds following a year of intense staff turnover. Director Elizabeth Kiker has been promising to keep a strong focus on advocacy work. The club has continued its innovative Advocacy Leadership Institute, which trains everyday residents in the tools of the advocacy trade, and it has been active in policy decisions surrounding key bike projects like the Westlake bikeway.

But it also largely dropped its Olympia efforts during this legislative session (which, due to partisans elements likely beyond Cascade’s abilities, wasn’t particularly productive on transportation issues). Since Washington State falls somewhere in the middle in terms of statewide advocacy staff and budget — and the next legislative session could be a lot more productive than this one — there is definitely room to grow efforts there to help Washington Bikes keep state leaders focused on road safety. 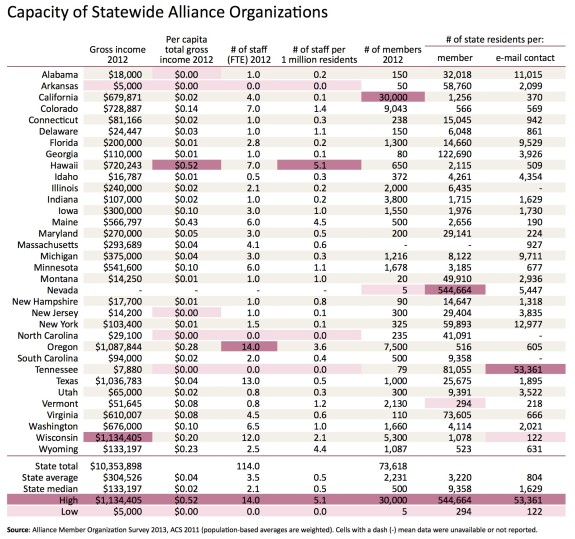 We also hope Cascade continues to grow BikePAC and its efforts to foster strong leaders and help elect people who will have the guts to make bold transportation safety decisions. This is the kind of work other cities joke about their bike organizations doing. In the Puget Sound Region, the vision of more biking and walking in our communities is both popular enough and funded enough to make it happen. So let’s do it.

(PS: You can join Cascade and yours truly 5:30 – 7:30 tonight for Bike Happy Hour at Chuck’s Hop Shop in the Central District. Cascade Bicycle Club is a Seattle Bike Blog advertiser.)

Founder and Editor of Seattle Bike Blog.
View all posts by Tom Fucoloro →
This entry was posted in news and tagged cascade bicycle club, washington bikes. Bookmark the permalink.

13 Responses to Report: When it comes to bike/walk advocacy groups, Seattle is in a league of its own