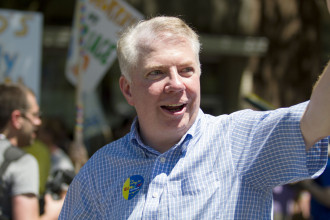 We’ve all been frustrated by an unexpected fee. I once refused to leave the desk of a Wells Fargo branch manager until she reversed a $5 fee I was charged for not having enough money in my account (a noble cause…right?).

It appears Ed Murray is no different. The mayoral challenger apparently threw a bit of an embarrassing fit about a UW parking ticket in 2010, the Seattle Times reports.

In his email to parking officials, he refuses to pay and threatens to cancel his UPASS (UW discount transit pass) and “buy parking in the area and drive to work every day” as a kind of punishment for refusing to sell him a parking pass until he pays the fee.

And unlike the fit I threw at Wells Fargo (I bought the best latte on Earth after getting my money back), Murray’s exchange was captured in email and has now surfaced to the world. From the Seattle Times:

In an email to parking officials, Murray complained he’d been unaware of the ticket, which hadn’t come up the last time he picked up parking passes. He wrote that he only would have been on campus in 2008 “in my capacity as Washington State Senator.”

“Since I have no intention of paying for a violation I have no knowledge of and since you are unwilling to sale [sic] me parking passes, please cancel my UPASS. I will buy parking in the area and drive to work every day,” Murray wrote in the Oct. 7, 2010, email. (The U-PASS is a discounted bus and transit pass for UW staff and students.)

UW parking employees appeared nervous at the blast from a powerful state politician. In an email, one wrote there was proof that notice of the ticket had been mailed to Murray’s home in addition to being placed on his vehicle. “I can certainly waive the late fee, but I can’t erase the ticket,” the employee wrote to a coworker, adding “this one may be sensitive.”

The Times also reports that he has three more unpaid UW parking tickets totaling $235. They are outstanding and have been sent to collections. He does not appear to have any City of Seattle parking tickets.

This revelation is certainly far less substantive than our recent posts about Murray. I don’t actually think the meat of the story reflects much on his views about important parking policy issues (though folks dinged with tickets under his leadership might have a new joke line).

But it’s an unusual view behind the scenes of how he handles a frustrating situation. It’s also interesting that it’s a parking ticket that brings it out of him.

Founder and Editor of Seattle Bike Blog.
View all posts by Tom Fucoloro →
This entry was posted in news and tagged 2013 mayoral race, ed murray, seattle times. Bookmark the permalink.