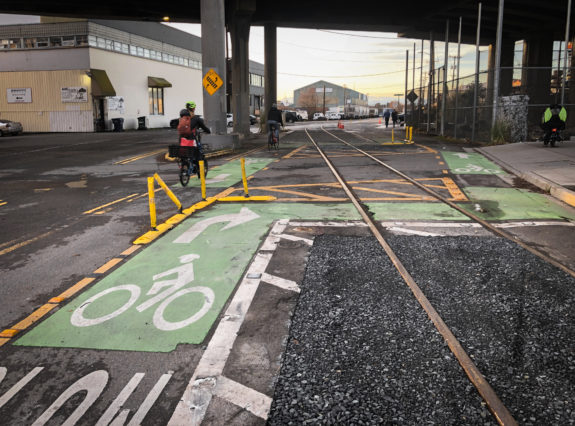 SDOT completed work on an “interim” redesign of the problematic track crossing under the Ballard Bridge for people attempting to bike the Missing Link of the Burke-Gilman Trail, but the new gravel pits sporadically placed in the area seems to be baffling riders rather than helping them.

People have been crashing on the train tracks consistently for decades as they try to navigate through industrial Ballard after the abrupt end of the Burke-Gilman Trail, and a group of eight injured riders filed a lawsuit against the city last year (full disclosure: Washington Bike Law advertises on Seattle Bike Blog but had no input into this reporting). There are many hazards in the Missing Link area, but the tracks under the Ballard Bridge are the worst. Many people have been seriously injured — left with everything from broken bones to head injuries — after crashing while trying to cross the tracks, which have wide and uneven gaps on either side of them that can surprise riders by grabbing their tires or otherwise knocking them off-balance.

The safest way to cross the tracks is to move across head-on at a right angle rather than trying to merge across them, and SDOT has redesigned the marked biking paths several times in an effort to encourage right angle crossings. The problem is that the designed turn is too sharp, so people cut the corners to make it more comfortable. So the department’s short-term solution was to … dig gravel pits?

The idea was to “make the correct route more apparent,” according to an SDOT spokesperson (see full statement below). Since people kept crossing at shallow angles within unevenly paved areas rather than follow the designated bike routing, the department’s hope was that the gravel would deter people from riding through those areas. But it didn’t work. 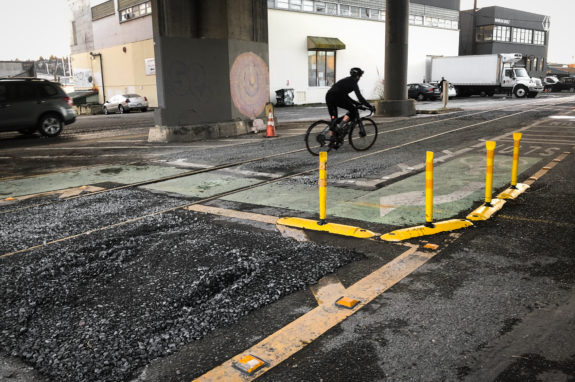 I observed people using the new routing for about 20 minutes on a surprise sunny day Tuesday, and a majority of riders in both directions ended up in the new gravel pits. I would estimate that only about 1 in 5 riders followed SDOT’s designed route, and at least one of them seemed unsteady while making the sharp and slow turns necessary to stay within the lines. There was no clear consensus on the best route through the area, and I saw people do all kinds of things. I sketched out a few of the more common choices on this SDOT diagram showing the interim design concept:

As you can see, only the purple route avoided the gravel (this is also my suggested alternative in either direction if you can’t make the city’s sharp turns). Everyone else ended up riding through at least a little gravel, and a surprising number of people rode significant distances through the middle of the pit. I suspect this is the route they were used to riding before the gravel pits were dug out. I talked to several riders and asked them what they thought of the gravel, and they all absolutely hated it. Words were not minced.

There are several deep ruts in the gravel, with is rather loose with medium-sized rocks. It is not the bike-friendly, hard-packed gravel you might find on a bike trail like the Cross-Kirkland Corridor Trail. You can see the paths some riders have already taken in the photos above, and some of the deep ruts suggest it didn’t go well for them. I am concerned that someone might assume the gravel is made to be biked on and then will be surprised to find that it is loose and dangerous.

The other issue is that gravel will not stay in the pits. There were many medium-sized rocks spread out on the pavement, which is yet another challenge for people just trying to get through the area. Either SDOT or some very kind (and probably frustrated) neighbor will need to sweep the gravel off the bike paths regularly.

One possible benefit of the gravel around the tracks is that it has raised the riding surface up closer to the level of the rails, which could maybe reduce the risk of crashing on the tracks. But gravel moves, and we don’t know what conditions will be like once the hobby train goes through.

The good news is that phase 2 of this project does seem to have a much better design with wider and more realistic turns. This design involves rerouting the general traffic lane so that the bike routes can go around the bridge support pillars, and there will be fencing to deter people from biking through the gravel. Though it isn’t clear why the gravel was even needed if the plan is to fence the area off anyway. 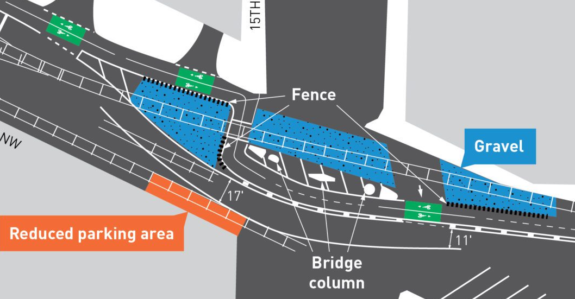 There is no solid timeline for phase 2 other than “in 2023,” but perhaps the poor results from phase 1 will expedite phase 2 into the “as soon as possible” column in SDOT’s work plan. UPDATE: I pressed SDOT for a more specific timeline, and they wrote: “We have not scheduled this work yet. We will likely schedule this in the near term, but the exact date will depend on weather conditions, crew availability, and if other unexpected high-priority safety needs arise (for example, emergency bridge closures and resulting bike detour implementation and management).”

The awkward phase 1 period also point to another issue: There was little to no public outreach about this change before it was constructed. Seattle Bike Blog did not learn of it until we received the construction notice in December. I’m not saying it should have gone through a huge and elaborate public process, but even a short online survey or consulting with the Bicycle Advisory Board would likely have returned some helpful advice about the use of gravel here.

Of course, this will all be moot if the city manages to finally clear all the legal hurdles and build the long-awaited Burke-Gilman Trail, which will bypass this area entirely by traveling along the south side of the street away from the tracks.

Below is SDOT’s response when I asked if there were any plans to address some of the issues described in this post:

We are not done with the project, what you see today is the interim condition. As a first step, we replaced some of the pavement next to the bicycle lanes with gravel in order to make the correct route more apparent. But we will be returning later this year to make the route easier to navigate for people on bikes by changing the layout of the bike lanes and road.

This will include realigning the bicycle lanes to the south of the bridge support columns. This will be a more comfortable and intuitive layout for people riding bikes, guiding them to cross the train tracks at a safe angle. The eastbound general traffic lane of Shilshole Ave NW will shift south for a short distance under the bridge to make room for the bike lane realignment. About 5 on-street parking spaces will be removed to accommodate the new bike lane design. Nearby businesses are aware of the pending changes to the right of way.

We will also add new fencing along the train tracks and new overhead lighting under the bridge.