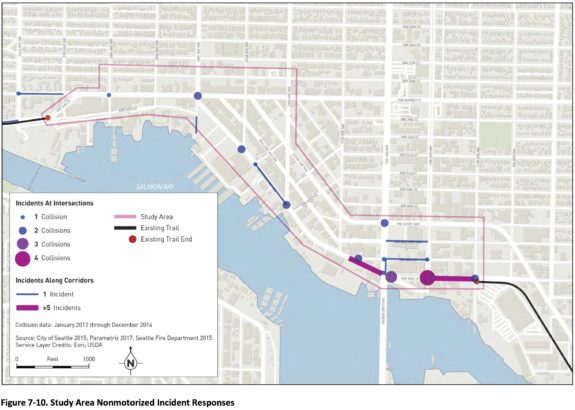 “Countless people” have crashed on the railroad tracks while biking on the streets just west of the abrupt terminus of the Burke-Gilman Trail in Ballard, and now eight of them have joined together in a lawsuit against both the Ballard Terminal Railroad and the City of Seattle.

The suit (PDF), filed by Washington Bike Law (full disclosure: Washington Bike Law advertises on Seattle Bike Blog), focuses on a high-crash stretch of NW 45th Street and Shilshole Ave NW under and near the Ballard Bridge. The plaintiff’s complaint refers to this area as “the Crash Zone,” noting the long-documented history of crashes there.

The suit alleges that the city and the railroad failed to maintain the street “in a condition that is reasonably safe for ordinary travel” and are therefore liable for damages from those injured while biking there. Each of the plaintiffs crashed in 2018, 2019 or 2020.

“Each of the Plaintiffs crashed while lawfully riding a bicycle in the Crash Zone and attempting to cross the Skewed Tracks,” the complaint states. “Each of the Plaintiffs crashed when their bicycle tires interacted with a track rail and/or flangeway gap in a manner which caused the bicycle and rider to lose dynamic stability. Upon crashing on the tracks and/or pavement, each Plaintiff suffered serious bodily injury and other damages.”

The problem is well-known, and it is a major reason why the city has pursued completion of the Burke-Gilman Trail in this area for decades. However, a group of appellants, including Ballard Terminal Railroad, have successfully delayed completion of the trail through legal action, and court battles are still ongoing. In the meantime, the street has been open and operating despite the persistent railroad track hazard. The city has made several attempts over the years to mitigate the hazard, even turning the street into a one-way street, dedicating the other lane to biking. But the lawsuit claims these design changes were not sufficient to make the street safe.

Below is the Washington Bike Law press release (PDF) announcing the lawsuit:

Washington Bike Law filed suit today on behalf of eight clients who are just a few of the countless people injured in a section of the Missing Link of the Burke-Gilman Trail the firm calls the “Crash Zone.”

The lawsuit names the Ballard Terminal Railroad (BTR) and the City of Seattle as defendants. Both have known of the danger for bicyclists crossing the railroad tracks in the Crash Zone for years, and both have had the duty to correct it but, despite their ability to make it safer, they failed to do so.

Washington Bike Law says it supports the efforts by the City and others to complete the Missing Link, but points out that the Crash Zone is not part of the Burke-Gilman Trail and that the City still has a duty to design and maintain streets that are reasonably safe for ordinary travel by bicycle, particularly in this important but infamously dangerous area for people riding bikes.

The City has an agreement with BTR that requires it to have insurance to compensate people injured as a result of the negligence of BTR or the City in the Crash Zone. Unfortunately, because of this agreement,Washington Bike Law believes that the City has less motivation to make safety improvements, since it has repeatedly taken the position that it is not financially responsible for the harm caused to so many people in the Crash Zone.

Additionally, BTR and other Ballard businesses have, for many years, used the legal system to prevent the completion of the Burke-Gilman Trail in the Missing Link. Washington Bike Law is no longer willing to wait for the Trail to provide a reasonably safe way to travel by bicycle through this important transportation corridor.

Typically, personal injury lawsuits can only provide money to make up for the harm caused by a defendant’s negligence. The danger to bicyclists in the Crash Zone, however, is so severe that Washington Bike Law argues it is a nuisance such that the Court has the power to do more than just award money; it has the power to order these defendants to take specific steps to make the area reasonably safe.

Washington Bike Law hopes that the defendants will respond by taking simple and inexpensive steps like providing more effective channelization and using a flange gap filler where bike tires keep getting caught in the tracks; and, if they do not, it argues that the Court should order them to take action to prevent additional serious injuries or deaths.

The attached Complaint filed in this matter is much longer than a typical Complaint because the complex history of the Missing Link and the many missed opportunities to fix the Crash Zone deserve a full telling.