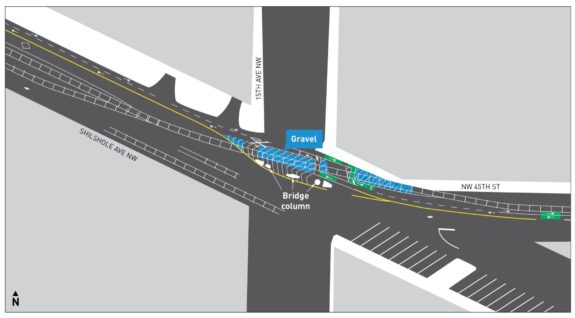 From SDOT :”We will be replacing unused pavement with gravel to make the it more obvious how to follow the bike lanes and cross the train tracks at a safe angle.”

SDOT is set to start work as soon as Monday on another fix to hopefully prevent people from crashing while biking across the train tracks under the Ballard Bridge as they navigate the notorious Burke-Gilman Trail Missing Link.

Crews will tear out sections of the roadway and replace it with gravel in hopes that this will “add more visual and physical cues for bike riders to follow the correct path across the train tracks,” according an SDOT blog post.

The biggest issue here is that the train tracks cut across the roadway at an unusual and shallow angle, and the gaps between the road and the rails can easily grab bike wheels if riders do not cross at a 90-degree angle. The city has tried multiple times to use paint and plastic posts to encourage riders to cross at a sharp angle, but people continue to crash and get injured here.

SDOT says this fix is not part of the Missing Link project, which remains held up in court. That design would move the bike path to the south side of NW 45th Street, bypassing this crossing area entirely in favor of an easier crossing location to the west of the Ballard Bridge. But as legal delays keep delaying that work, people are still getting hurt.

Riders in the area will need to detour around the work zone via 14th Ave NW and NW 46th Street. The work is expected to last up to three days. A safer track crossing would be an incredible Christmas present.

SDOT also plans to return to the location in 2023 to make more improvements, including rerouting the bike lanes around the south side of the bridge supports. Here’s what that could look like: 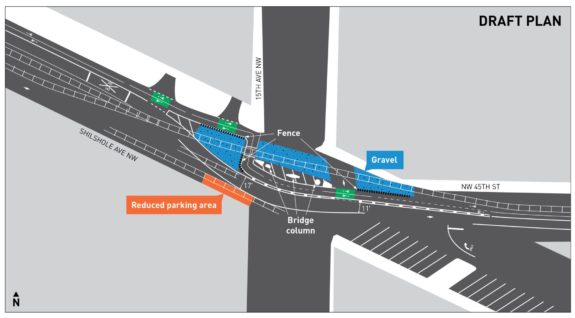 Next week, we will be building safety enhancements to the bike lanes on Shilshole Ave NW beneath the Ballard Bridge. These changes will enhance navigation for people who bike across the train tracks. Depending on the weather, we expect work to last up to three days starting as soon as Monday, December 19.

A detour for people driving and riding bikes may be in place for up to three days while construction is occurring. During that time, this section of Shilshole Ave NW will be local access only. All other people driving or biking through the area should follow detour signs one block north to NW 46th St.

This work is separate and independent from the Burke-Gilman Trail Missing Link project which would build a 1.4 mile connection along Salmon Bay from 11th Ave NW to the Ballard Locks. This is an opportunity for a quick adjustment that makes the existing bike lanes more clear for people biking.

Enhancements will make it more intuitive for bike riders to navigate across railroad tracks safely.

While the current bike lanes direct bike riders to cross the train tracks at the right angle, we see a good opportunity to make this guidance more clear for bike riders.

As a first step, we will be replacing some of the pavement next to the bicycle lanes with gravel in order to make the correct route even more apparent.

In 2023, we will return to this area to make the route even easier for people on bikes and in cars.

This will include realigning the bicycle lanes to the south of the bridge support columns. This will be a more comfortable and intuitive layout for people riding bikes, guiding them to cross the train tracks at a safe angle.

We will also add new fencing along the train tracks and new overhead lighting under the bridge.

The eastbound general traffic lane of Shilshole Ave NW will shift south for a short distance under the bridge to make room for the bike lane realignment. About 5 on-street parking spaces will be removed to accommodate the new bike lane design.