SDOT released the results of autumn community outreach about Eastlake Avenue bike lane design options, and the results were once again very clear: People strongly favor safe bike lanes on this vital connection between the University Bridge and South Lake Union where there were 39 collisions involving people bikes between 2012 and 2017. According to the report summary, “Survey responses indicated strong support for protected bike lanes even if it meant removing parking and vehicle travel lanes.”

We reported about the survey and the various design options back in September, and the results are not very surprising. The most galvanizing question was whether the project should build skinny bike lanes or wider buffered bike lanes between Harvard and Fuhrman Avenues near the south end of the University Bridge. Here were the options presented: 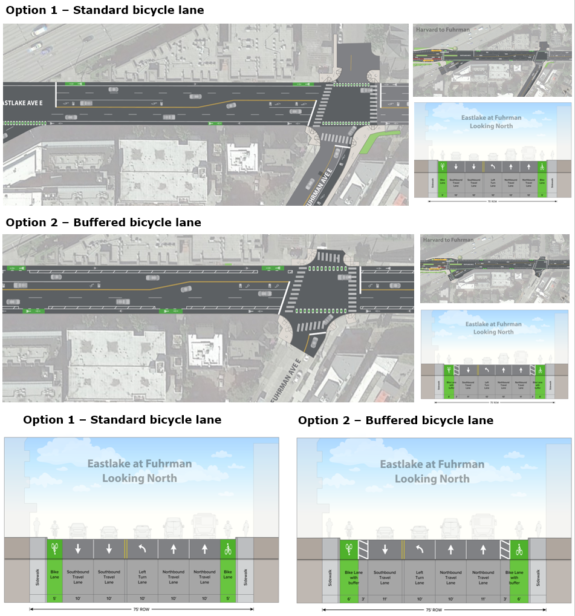 The responses from 1,162 people were decisive with 91% preferring the wider bike lanes with buffer space: 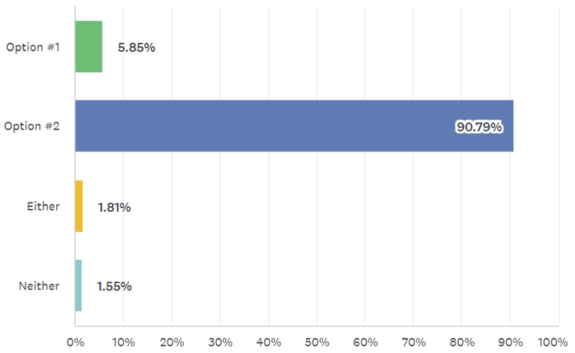 210 people wrote an additional comment requesting the addition of a bike lane barrier.

Speaking of bike lane barriers, there was overwhelming 90% support for some form of permanent concrete bike lane protection. Only 8% of respondents preferred paint and post style barriers. I suspect the “concrete guard” option got some extra votes in part because the photo they included in the survey showed an example that had been part of an art project. So hey, let’s not forget about art! 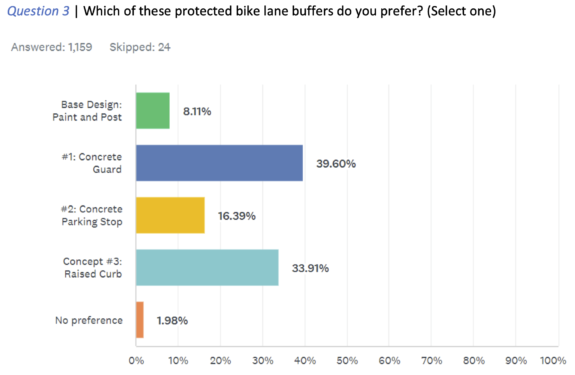 One somewhat complicated decision was around the intersection of NE 43rd Street and 11th Avenue NE, where the RapidRide J bus route will turn toward U District Station and terminate. The plan calls for the bike lane to transition from the right side of the road to the left at this intersection, and planners asked for opinions on a set of options for doing so.

We suggested either Option 4 or a mix of options 3 and 4. We opposed option 1. 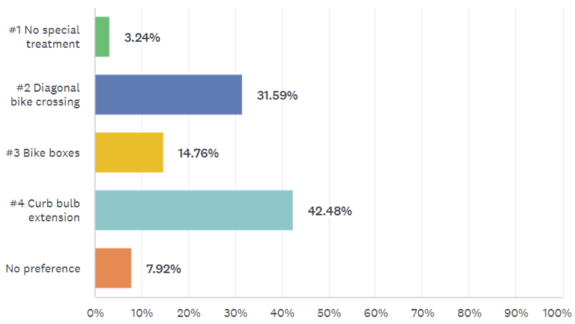 We also suggested that the project team should consider not crossing to the left side of the street at all. Of the 285 people who wrote in comments about the NE 43rd Street intersection, 93 of them said that the bike lane should not switch sides of the street. The project team responded to this idea in a feedback summary report (PDF):

SDOT’s design guidelines recommend having a protected bike lane on left side on one-way roads that have buses and, although this project will not extend the RapidRide J Line north of NE 43rd St, other bus routes still use 11th Ave NE. This is due to safety concerns as busy transit corridors are on the right side of the road and to provide better visibility as cyclists are closer to drivers. SDOT has a separate paving project planning to install the protected bike lane from this intersection to NE 67th St where it accesses the Roosevelt Link station which is on the left side of 11th Ave NE.

Extending the bike lanes beyond NE 43rd Street is a separate SDOT project, but the two projects have coordinated around a left-side bike lane. We would once again urge SDOT and the project team to consider an option that keeps the bike lane on the right wide of the street and add that 11th Ave NE does not need multiple lanes of traffic, especially north of NE 45th Street where traffic volumes are vanishingly low with fewer than 6,000 vehicles per day (including bikes) in 2019. Multiple lanes encourage speeding, and there is absolutely no reason to have more than one lane on this street. The city should consider an option for 11th with wide bike lanes and buffer space to prioritize crosswalk safety along the street. Perhaps Dexter-style bus stops would be appropriate. Even if a left-side bike lane is still preferred, we encourage SDOT to reduce the number of lanes to prioritize safety.

The last bike-related question was about the intersection of Fairview Avenue N and Eastlake. This was another somewhat complicated question, and we were not enthusiastic about any of them, suggesting “an option that included the crosswalk in Options 1–3 in addition to Option 4.” We opposed options 2 and 3 due to the convoluted path for people continuing south and Eastlake. 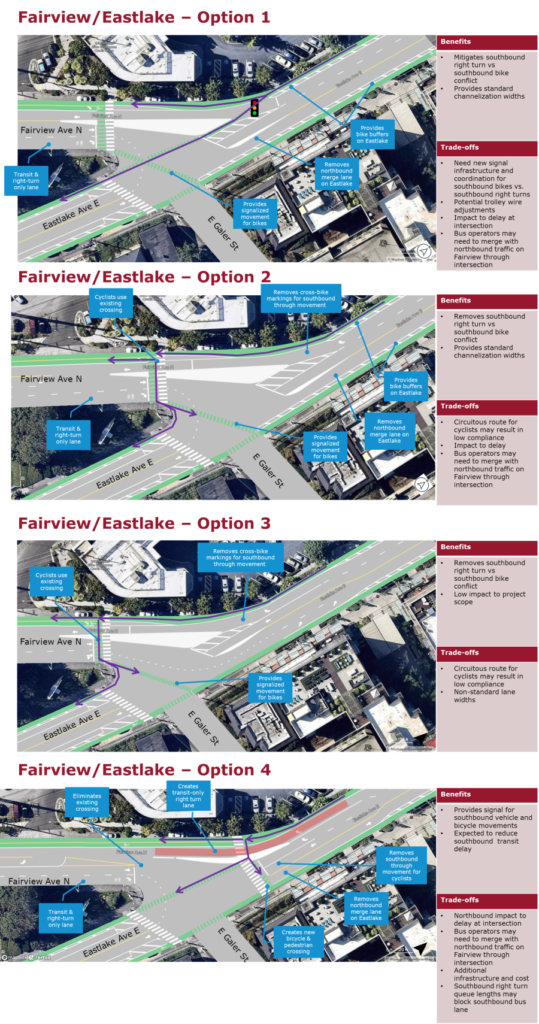 Responses were somewhat scattered, though option 1 came out on top with option 4 a clear second. I still think an option 1 mashup that also includes the option 4 crosswalk is worth considering. Having the southbound bike lane cross right-turning traffic in option 1 just seems less than ideal. There’s still work to do on this design as none of the options nails it. Are we sure teeing up the streets into a 4-way stop wouldn’t work just fine here? Traffic volumes aren’t terribly high. Maybe we’re overthinking this.

Hopefully, this is the last time the project team needs to poll the public on whether they want safe bike lanes on Eastlake Ave. I can’t wait to be able to ride safety and comfortably from the U Bridge to downtown via Eastlake and Fairview. This has been at the top of people’s bike route wish lists for decades, and so long as they get the details right it will be an immediate success when it finally opens in a few years. Construction could start in late 2023 and is expected to take years. According to the official project schedule, RapidRide J service won’t start until 2027, the bike lanes will hopefully be operational before that.