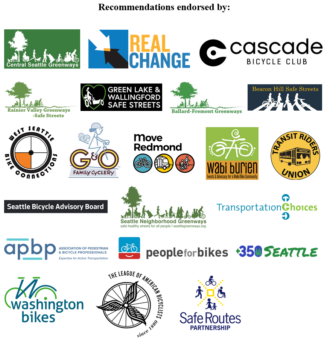 Logos of endorsing organizations from the Helmet Law Working Group’s letter to the Board of Health.

The list of organizations backing a proposal to repeal King County’s all-ages bicycle helmet law includes many local bicycling and safe streets groups like Seattle Neighborhood Greenways and Cascade Bicycle Club as well as national organizations like People for Bikes and the League of American Bicyclists. This momentum comes as the King County Board of Health is set Thursday to begin deliberating a change to their rare regulation making it a ticketable offense for anyone to ride a bicycle without a helmet.

Real Change, Cascade and Greenways worked together over the past year to convene the Helmet Law Working Group made up of 18 people all researching best practices, the effectiveness of the law and its unintended consequences. Together, they put together a nuanced and meticulously-researched 40-page report.

The group does not recommend against wearing a helmet or deny the effectiveness of wearing a helmet when a collision occurs. Instead, it focuses entirely on the law, especially data showing that police are far more likely to stop Black people and people experiencing homelessness for bicycle helmet violations.

“In Seattle, nearly half of all helmet citations since 2017 were issued to people experiencing homelessness,” the group wrote. “Since 2003, Black cyclists in Seattle have received citations at a rate 3.8 times higher, Indigenous cyclists 2.2 times higher, and Hispanic/Latino cyclists 1.4 times higher than white cyclists. Differences in helmet use between populations cannot explain these disparities.”

This disparity in enforcement is reason enough to repeal this law.

Helmet use is too easy for officers to use as pretense for a stop. If they want to harass someone due to their race or homelessness status, the lack of helmet gives them an easy and legal excuse to do so. Well-to-do white people can already bike helmet-free around Seattle without fear of getting stopped by police. The data above does not even represent all the times officers used the helmet law as a reason to stop someone but did not end up issuing a ticket. But every police stop is an opportunity for a person to end up trapped in the so-called justice system or become the victim of police violence. Biking without a helmet simply is not an offense worthy of a police stop.

But beyond stops, the helmet law is also used after the fact to wrongly place blame on the victim of a traffic collision. A 2020 Real Change investigation into such an incident found that once officers responding to a collision realized the person biking was experiencing homelessness, they stopped focusing on the circumstances of the collision and instead started trying to figure out if the bike was stolen (it wasn’t) before ticketing the injured man for not wearing a helmet. Helmet use has no place in determining fault in a traffic collision, yet because it is illegal it can be used as evidence that the person biking is a law-breaker. This is another unintended negative of the law that the Board needs to consider.

The Helmet Law Working Group also questions the extent that the law is the primary motivation for people choosing to wear a helmet. Perhaps in 1993, when this law was first enacted, it was a heavy-handed way to force widespread use of helmets. But our culture has changed, and people are very aware of what helmets can do to keep them safe. For example, the Group found that helmet use is about 80% in Portland, Oregon, which has no helmet law. The rate is also about 80% in Vancouver, B.C., which like Seattle does have an all-ages helmet law. The rate is about 90% in Seattle. There’s no reason at this point to think repealing the helmet law would result in plummeting rates of helmet use. It’s reasonable to think there would be some reduction, but most people who wear helmets are probably choosing to do so for reasons other than the threat of a ticket.

People are sometimes too confident in the protective abilities of helmets, focusing disproportionately on helmet use as a bicycle safety measure rather than focusing on preventing collisions from happening in the first place. Many very important parts of the body are not protected by helmets, and helmets offer a very inadequate level of head protection in high-speed collisions with cars and trucks. The safest places for cycling in the world have very low helmet use because bike routes are largely comfortable and protected from vehicle traffic. The focus on helmets shifts the onus for safety on the vulnerable road users and victims of traffic violence, ignoring the core causes of traffic injuries and deaths. Driving negligence and speeding as well as dangerous roadway designs are well-known causes of collisions. Helmets do nothing at all to prevent traffic collisions. It’s much easier for society to just say, “Well, it’s their fault for not wearing a helmet,” than it is to redesign infrastructure and adjust car-centric transportation budgets.

It’s also worth noting that even in most places where helmet use for everyday travel is very low, people do typically wear helmets when racing, training or riding in pace lines. But not all biking is sports riding, and people should have the discretion to make their own decisions about when to wear a helmet. One obvious example is hopping on a bike share bike. People are very unlikely to have a helmet with them when they see an available bike and decide to ride, but bike share has proven to be very safe even with low helmet use. The bikes position riders sitting upright, and it is difficult to go very fast (the e-bikes are required to stop giving power assist at 15 mph).

Bike share was not an option when this law was first enacted, and there are many public health benefits associated with the increase in cycling that bike share has enabled in King County. Bike trips spiked across the Fremont Bridge when private bike share services launched, and they continued to climb even after many companies left. Bike share clearly jump-started biking habits for a lot of people. The Board should revisit a rule that makes most bike share trips illegal because increased physical activity and decreased use of motor vehicles are good public health outcomes.

There is no good reason for King County to maintain this law any further. If the goal in 1993 was to increase helmet use, then that goal has been achieved whether due to the law or due to other changes in Pacific Northwest cycling culture. Enforcement of the law does more harm than good, and that harm falls disproportionately on people of color. National best practices from safe streets professionals recommend against helmet laws, stranding King County’s law a relic of poor public policy crafted with good intentions. We all want to prevent head injuries, but this law is not the way to do it.

Here’s an excerpt from the Helmet Law Working Group’s letter to the Board of Health:

Based on this holistic public health view, we urge the Board of Health to fully repeal the helmet law for both adults and youth. Additionally:

As a member of the Board of Health, I support repealing the helmet law and shifting to a public health, public education, and safer streets approach to protecting cyclists.

(Oh and while still very much encouraging people to wear helmets⛑) https://t.co/fdkOmIAYdG