Correction: the data compiled by Ethan Campbell of Central Seattle Greenways has been updated after further analysis of the citations issued revealed a number of duplicates. The overall summary of the information has not significantly changed.

The King County Board of Health is likely to add a review of the county’s bicycle helmet requirement to its 2021 workplan today at its monthly meeting. This move comes after the Cascade Bicycle Club, nation’s largest statewide bicycle nonprofit, formally announced earlier this month that they are in support of repealing the law requiring bike riders in the state’s largest county to wear helmets.

Cascade’s Tamar Shuhendler told me that the bicycle club sees a responsibility to reexamine its decision on the helmet law, as one of the organizations that originally had supported a King County helmet law. When I asked her about the reaction in the cycling community to the club coming out for repeal, she acknowledged the diversity of opinion on the issue, saying Cascade “welcomes as much community input as we can possibly get”, in advance of any final action on the law.

King County Councilmember Jeanne Kohl-Welles announced she would introduce the amendment to the workplan earlier this month. “The current helmet laws in place are clearly having a disparate and negative impact on our most vulnerable neighbors and I agree that the enforcement of this law is not being applied fairly,” Kohl-Welles wrote in an email sent to her constituents. The amendment is expected to pass. UPDATE: It passed, unanimously.

I will be offering an amendment at our next Board of Health meeting to add this important issue to the work plan. https://t.co/v1XGTUQlMK

The impetus for reviewing the law now is largely driven by new information around the disproportionate impact of the law. In December, Crosscut’s David Kroman published data showing that nearly half of the helmet law citations given in the City of Seattle since 2017 went to people experiencing homelessness, a vast chasm of disproportionality that illustrates how the law is being misused.

Last November, video captured Seattle Police mocking a Real Change vendor who had just been involved in a traffic collision. The person was cited for not wearing a helmet, bringing home just how this law is used as a cudgel against people experiencing homelessness.

Last year, Central Seattle Greenways convened a Helmet Law Working Group with Cascade and Real Change. CSG member Ethan C. Campbell analyzed data on 1,667 helmet citations in Seattle and found that Black people made up over 17% of the tickets issued despite making up 8% of Seattle’s population. A similar disproportionality was found with other bicycle-related infractions, not just helmet law violations, pointing to more work to be done around the issue of enforcement. 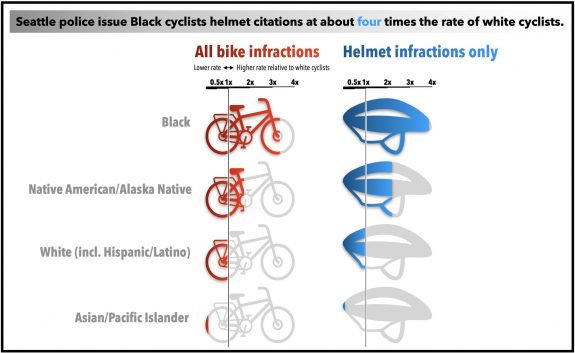 Tacoma repealed its helmet law last year, stating in the text of the ordinance that it would “reduce the likelihood of unnecessary enforcement actions”, citing lessons learned during the bike and scooter share rollout there.

In 2013, the Centers for Disease Control and the National Highway Traffic Safety Administration announced they would no longer promote the conclusion that bicycle helmets reduce head injury rates by 85 percent in light of meta-analyses of similar studies that found lower and inconclusive results, a fact that comes from a 1989 study that drove many municipalities around the country to pass helmet laws in the early 1990s. But advocacy organizations stayed away from advocating for full repeal of the laws on the books.

Seattle’s bike share goldrush resurfaced the issue several years ago but there was little momentum for repeal. It took an increased awareness around the issue of selective enforcement to finally push the issue back to the forefront. What’s left to be seen is whether a shift in the Public Health community around the issue has also occurred enough to affirmatively support repeal.

Ryan Packer is Temporary Editor of Seattle Bike Blog.
View all posts by Ryan Packer →
This entry was posted in news and tagged helmet laws, king county board of health. Bookmark the permalink.