Missing the forest for the bicycle helmets 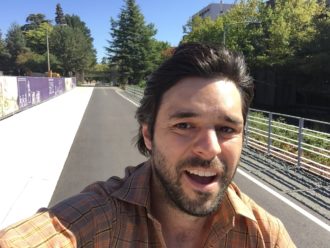 The author breaking the law while making a quick bike share trip on the Burke-Gilman Trail.

This week, the authors of a disputed study promoting bicycle helmet laws with bike share systems penned an op-ed for Crosscut arguing that Seattle’s bike share companies should be forced to provide helmets with their bikes.

Aside from the ick factor of sharing helmets with strangers, the hyper-focus on helmets is dangerous because such a requirement would certainly harm and possible kill bike share business in Seattle. The helmet costs (purchasing, collecting, inspecting, cleaning, and redistributing them) were already a factor in the financial demise of Pronto. We cannot repeat that mistake.

And even the authors’ own research could just as easily be seen to demonstrate the public health and bike safety benefits of bike share systems without helmet use. They just draw a questionable conclusion from their data.

That sounds like a big step in the right direction to me (and bicycle researcher Kay Teschke). But to authors Fred Rivara and Janessa Graves, the data shows an increase in the proportion of those (fewer) injuries that are head injuries. So they conclude that bike share systems need to require helmets.

They are missing the forest for the trees. By hyper-focusing on helmets, the op-ed authors have failed to balance all the other public health benefits of bike share or the damage to public health that would occur if a helmet requirement shut down or limited bike share company operations.

They have also drawn conclusions without convincing support that bike share helmet use is the reason for the discrepancy in injury rates in their data.

A 2016 Mineta Transportation Institute study (sponsored by the California DOT and USDOT) backed up previous studies finding the injury rate on bike share bikes to be significantly lower than the injury rate for people riding their own bikes. The Rivara/Graves data does not specify whether the people getting head injuries were riding bike share bikes or personal bikes. So how can they conclude that bike share users not wearing helmets is the cause? That leap of logic is simply not supported by their data (UPDATE: This and other concerns were highlighted in a 2014 letter Teschke and Meghan Winters wrote to the American Journal of Public Health. UPDATE 2: The American Journal of Public Health also published this response from NE Seattle Greenways leader Andres Salomon, Gray Kimbrough, and Anna Bershteyn. The journal also published this response from Graves, et al.).

In fact, their data also cannot conclude that the changes in injury rates was due to bike share at all. The change could be due to a huge number of variables, such as the building of new bike lanes in study cities with bike share. The MTI study was unable to find a clear tie between bike share use and overall bike injury rates (though the authors acknowledge that a lack of quality bicycle trip data makes such an analysis very difficult).

But the worst part about focusing on helmets is that such a requirement puts the viability of bike share at risk. This is not a hypothetical statement. It already happened once in this town.

Here’s some data: 100 percent of U.S. bike share systems required to provide helmets with every bike and operating in counties with all-ages helmet laws have lost money and closed down. Because Pronto was the only one.

(Helmets were not the only cause of Pronto’s demise, but they contributed to the budget crisis that sunk the system both in terms of helmet costs and in terms of decreased ridership.)

Bike share could be a big part of a transportation shift in our city that leads to big public health benefits not only for the users of the bikes but for others around them. As the population grows and congestion gets worse, Seattle and King County must provide new options for people trying to get around. Transportation is our region’s biggest creator of air pollution (which causes all kinds of serious localized health issues) and greenhouse gas emissions (a public health problem on a global scale). And physical inactivity is a major contributor of all kinds of debilitating and fatal health issues.

Bike share will not solve any of these issues alone, of course. But it is a part of the solution.

There’s also a simple practical barrier to requiring helmets on bike share bikes. Even if Rivara and Graves were right about their conclusion, nobody is going to wear a helmet that has been worn by unknown numbers of people and has been sitting in the open on Seattle streets and in Seattle weather for an unknown amount of time. That is disgusting and unsanitary. And it’s not even particularly safe to wear a helmet that has not been inspected for cracks and wear.

Their op-ed is titled, “Bike share and helmets: Let’s be realistic,” but their proposed solution is completely unrealistic.

King County passed its all-ages helmet law in the 90s based in large part on a disputed 1989 study that Rivara helped author. That study is the source of that factoid you see on all kinds of bicycle helmet outreach saying that helmets can prevent up to 88 percent of brain injuries from bike crashes.

But the National Highway Traffic Safety Administration no longer backs that study, and follow-up studies have not been able to replicate its results to the same extent. Studies consistently determine helmets do decrease brain injuries in the case of a collision, but some also found increases in serious neck injuries. Ultimately, a helmet clearly absorbs impact, but it’s important to know that the actual benefit is murkier than the disputed 88 percent figure would have you believe. A helmet isn’t an invincibility cloak, and it’s dangerous to think of them that way.

But even acknowledging that a bicycle helmet could help prevent a brain injury in the case of a collision, focusing on helmets ignores the biggest cause of bicycle head injuries: The collisions themselves. It is far more important to prevent collisions from happening in the first place than to require that people biking wear a helmet. Public health agencies should focus on the causes of collisions, not crash victims’ choice of headwear.

Head injuries are also the leading causes of death for people walking and people in cars, yet nobody talks about motoring helmet laws. Well, almost nobody.

The safest cities in the world for cycling have very low helmet use rates but great bike infrastructure and a ton of people biking. We should focus bicycle safety efforts on best practices in the places with the best safety records. Adult helmet laws are not among them.

The other problem with all-ages helmet laws is enforcement. As the law exists now, police officers can stop, question and ticket someone simply for riding a bike without wearing a helmet. Not only is that a very questionable use of police time, but it is also not good police policy to create cause for stops that are not of significant public safety benefit. An adult riding a bicycle without wearing a helmet just does not rise to the level of public safety menace justifying a police interaction.

Seattle Police seem to understand this, and bicycle helmet tickets are way down in recent years, the Seattle Times reports. Before that, a huge percentage of helmet tickets were given by a single officer (and many of those went to one particular bike messenger). County-wide, tickets are given disproportionately depending on where you are, MyNorthwest reports.

The solution to bike safety is definitely not to have police step up their helmet law enforcement. So why have the law at all? The King County Board of Health should repeal the helmet law, at least for adults, and focus instead on bike encouragement and safer street designs.

Unlike some more adamant opponents to helmet laws, Seattle Bike Blog is not against bicycle helmets. If you want to wear a bike helmet, please do. Whatever makes you more comfortable and gets you biking is great in our book. The use of helmets while biking is a huge gray area, which is why the debate gets so heated and divided. Human beings are not great at dealing with gray areas, preferring instead to declare something absolutely mandatory or not needed at all. There’s a clear difference between cruising a half mile to the grocery store and going on a training ride on busy roads. But King County’s helmet law clumsily lumps these activities together.

I don’t think Rivara and Graves are out to make bicycling less safe. Certainly, there are a lot of people who want more people to wear bike helmets because they genuinely want them to stay safe. And traumatic brain injury is no joke. I also want people to be safe and healthy. I want as few people getting hurt as possible.

Ultimately, focusing on helmets is a huge distraction from all the other issues that could have a much bigger effect bike safety and bike use. I really wish I didn’t have to keep writing stories about it, because it is a waste of everyone’s time to keep arguing. But as long as the law is on the books, it’s going to keep coming up and keep distracting us all. With Seattle’s bike network slowly coming together and bike share companies flourishing, we need to focus on how to support and build on those efforts.

34 Responses to Missing the forest for the bicycle helmets