Seattle is working to catch up on bike projects after Mayor Jenny Durkan paused or cancelled nearly all bike plans during the first half or so of her term. And though it may be nearly impossible to completely make up for lost time, SDOT has been working on many significant bike improvements. So stay tuned for more coverage of new bike infrastructure around town, a lot of which is really exciting. 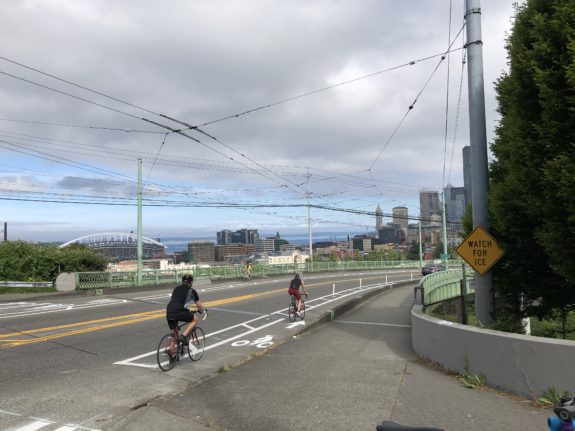 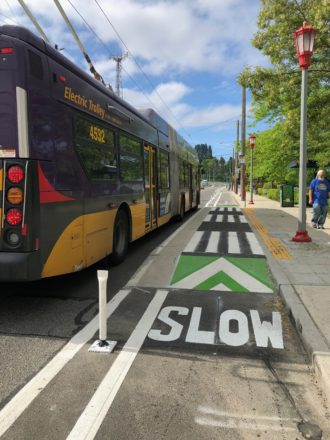 First up, the José Rizal Bridge just got a major upgrade with new protected bike lanes. The lines have been painted for months, but the city installed the plastic pylons this week.

The relatively short project connects from King Street in the International District to S Charles Street on Beacon Hill. From Charles, people can either continue south up Golf Drive S to 14th and 15th Avenues S, head west to 12th Ave S, or head east to take the connection to the Mountains to Sound Trail.

The bridge is one of the most important bike pinch points for many southend bike routes. So while the length is short, the importance of the connection is huge. Not only will the bike lanes make biking more comfortable, but it should also dramatically reduce the number of people biking on the sidewalks to avoid the often fast traffic.

Oh, and traffic should be calmer and safer, too. SDOT data shows that during the 13 years from 2004 to 2017, there were 15 collisions with people walking or biking at the intersection with S Weller Street, 24 collisions between Weller and Charles, and 5 at the Charles intersection. 44 people in just 13 years. That’s why SDOT saw this project as not just a bike lane project, but a Vision Zero project. The bike lanes help narrow the driving space to reduce dangerous passing and speeding. It also means that anyone crossing the street, including people trying to access these busy bus stops, will have a shorter distance to cross. If it works as well as it should, then every three or four months from now on a person will be spared a potentially life-threatening collision near this bridge.

Bus stops let passengers out into the bike lane, which rise up to sidewalk level at bus stops. People biking are of course required to stop for bus passengers. It allows buses to stop in-lane so they don’t have to waste time trying to merge back into traffic, and it eliminated the need for buses to merge into and out of the bike lane. But, of course, it’s a little odd to have people load and unload in the bike lane itself. It’s better when the bike lane can pass behind a bus island (like on Dexter or Roosevelt), but the roadway width and project budgets don’t always make that an easy option. The set-up is a compromise design the city has been trying for several years, including on NE 65th St. However, this is likely to be the biggest test of the design yet since both bus and bike volumes will be higher than on 65th. I have not heard of any problems with similar bus stops (though that doesn’t mean they haven’t happened). 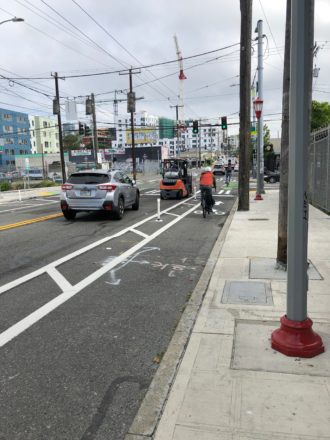 The project unfortunately does not connect to the 12th Ave bike lanes that start north of Yesler Way, leaving a major gap in the bike network. If they connected to Yesler, they would also connect into Yesler Terrace and the Broadway Bikeway. So the gap on 12th Ave remains a major need with no feasible alternative.

It’s always great to see southend bike routes get some love. This improvement is a big improvement for a lot of people. People can now bike from 2nd Avenue downtown along the late 2019 connection to 5th and King (fair-weather riders who didn’t bike downtown last year may just now be discovering this connection), then up King to these new bike lanes across the bridge. That’s a big deal.

As travel downtown increases, a lot of people are going to be surprised by how many improvements there have been since summer 2019. You can now bike from the José Rizal Bridge to the Fremont Bridge almost entirely in a protected bike lane (King Street is the only exception). That was unimaginable not so long ago. 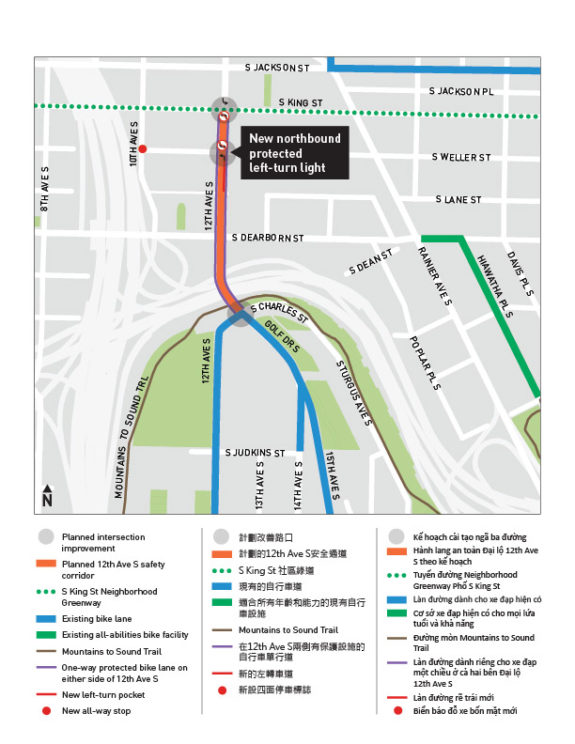