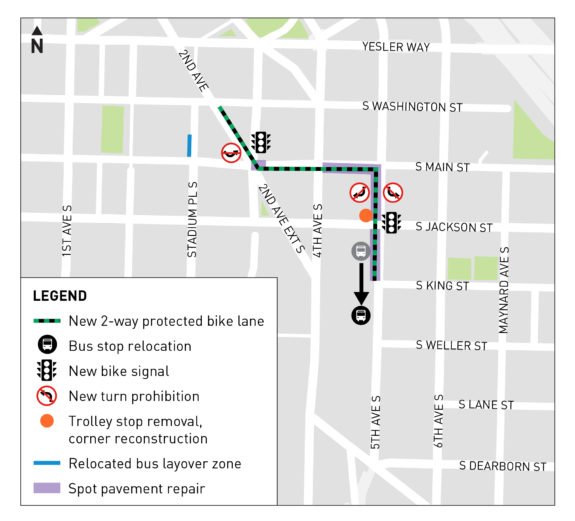 It may be short, but don’t let that fool you. The protected bike lanes currently under construction on a few blocks of S Main St and 5th Ave S between the International District and the 2nd Ave bike lane should easily be the most important improvements to bike access Seattle has completed since, well, 2nd Ave.

It doesn’t really look like a difficult connection on a map because the International District looks like it’s just part of the downtown street grid. But once you’re on the ground on a bike, you realize there is no remotely comfortable or functional option for getting between the neighborhood and the downtown core on a bike. And since a connection from the ID also unlocks bike routes from many central and southend neighborhoods, the lack of a south downtown bike connection has huge potential for a lot of people.

The problem is that the rail corridor separates the ID and Pioneer Square. And thanks to extreme grades up First Hill, the only flat street between the two neighborhoods — S Jackson St — has dangerous streetcar tracks. So people either need to ride in busy mixed traffic and hope they successfully navigate the streetcar tracks or try to ride on packed, skinny sidewalks. Both these options are bad. The only other option is to use the elevator (or stairs if you are able) next to the CenturyLink Field parking lot and cross the Weller St bridge, but this has obvious limitations (and is totally unusable if you have a family/cargo bike).

Short of making Jackson a truly complete street (which of course we should do), the planned route is the best option. And as we reported a year ago, it has not been easy to get to this point. At the time, SDOT was proposing a ridiculously steep option via 6th Ave S, which looks similar on paper but requires an absurd climb compared to 5th Ave S. There were serious concerns that nobody would use this steeper route, which would be a waste of money and still leave this connection incomplete. It took a lot of persistent advocacy and inter-agency coordination to make this much better route happen.

The defunct waterfront streetcar platform at 5th and Jackson had to be moved, sections of old streetcar tracks had to be repaved, busy bus stops had to move and precious bus layover space was displaced. None of this was easy.

The under-construction project extends the two-way 2nd Ave bike lane another block south, then builds new two-way bike lanes on the south side of S Main Street and the west side of 5th Ave S to S King St. People can then either continue east on King into the Central District or connect to the S Dearborn St protected bike lanes via Maynard Ave S. 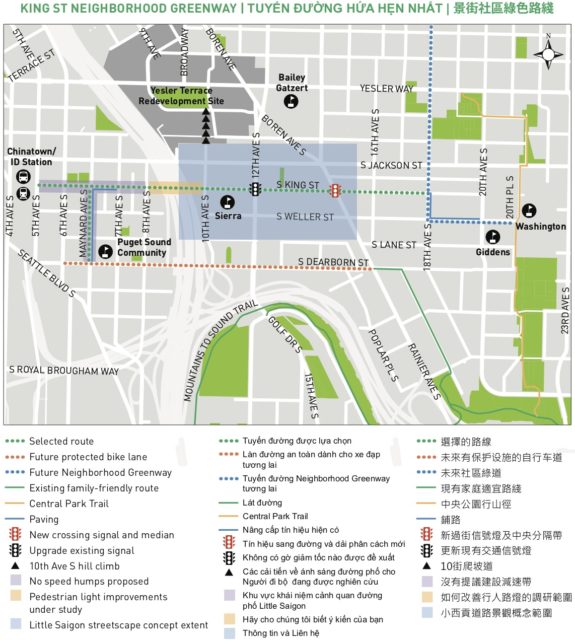 The city is also making improvements to King Street, including a new signal at Rainier Ave S. They are calling this a “neighborhood greenway,” though it doesn’t sound much like a neighborhood greenway (it’s a bustling commercial street, not a quiet residential street). But traffic is mostly slow, and it is already a popular bike route. And the new signal at Rainier should make it a truly viable alternative for people who currently have no real option other than Jackson St.

So no, bike routes to the CD and the southend are nowhere close to complete. But these are big steps in the right direction.