A report completed by the Seattle Department of Transportation in December but not released until this week shows how much catching up the department is planning to do in 2021 to complete installing bike facilities that it had originally planned to install last year. This report is the most recent update on SDOT’s progress on building Seattle’s citywide bicycle network since the recalibration of the construction plan for the remainder of the Move Seattle levy through 2024 was completed in 2019.

According to the report, only 2.3 miles of protected bike lanes or neighborhood greenways were completed through the third quarter of 2020, compared to the original plan for the year of 15.2 miles set in 2019. The ones that were installed were almost all big achievements, it must be noted. These were the Avalon Way PBL in West Seattle. the first phase of the 4th Ave PBL downtown, a Yesler Way PBL between 12th and 14th Ave, and a neighborhood greenway on Capitol Hill connecting Lowell Elementary School and Meany Middle School. SDOT is also counting the Lander Street Overpass as bicycle infrastructure in the report, which certainly makes it the most expensive trail constructed in Seattle at $100 million for one quarter mile.

Another 6 miles of PBLs and greenways were scheduled to be completed by the end of the year, but the majority of those projects didn’t achieve that deadline and were pushed into 2021. One project, the completion of the Pike Street protected bike lane between 6th and 9th Ave downtown, was essentially cancelled after originally being scheduled for last year. It’s now only scheduled to be completed with the rest of the permanent Pike and Pine PBLs installed as part of the Pike/Pine Renaissance in 2023. 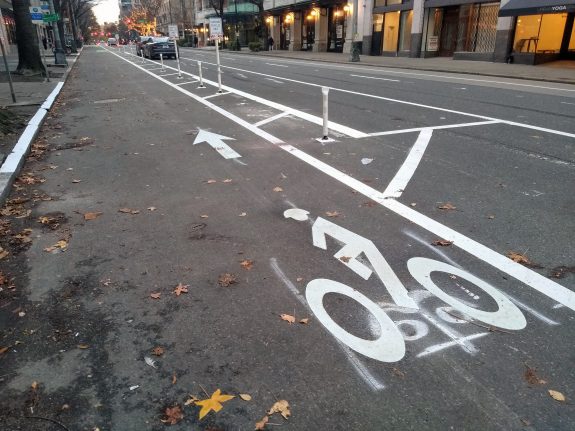 The first phase of the 4th Ave protected bike lane downtown was completed in 2020.

That means SDOT is planning to complete around 11 miles of neighborhood greenways or protected bike lanes this year that were originally planned for last year, on top of what was originally scheduled for 2021. In an assessment of the impact of the Covid-19 crisis on the entire department published this year, SDOT said they were on track to complete 50-55 miles of bike facilities, including painted bike lanes, by the end of the levy in 2024. This is half of what was promised to voters in 2015.

We don’t yet know what impact the delay in project delivery in 2020 will have on projects scheduled for 2021 and beyond. Traditionally, every spring the Bicycle Master Plan’s implementation schedule would be reviewed by the city council’s transportation committee, something that didn’t happen in 2020 due to the Covid emergency. It’s also not clear that reviewing the bicycle master plan’s implementation is a priority of Alex Pedersen’s transportation committee. 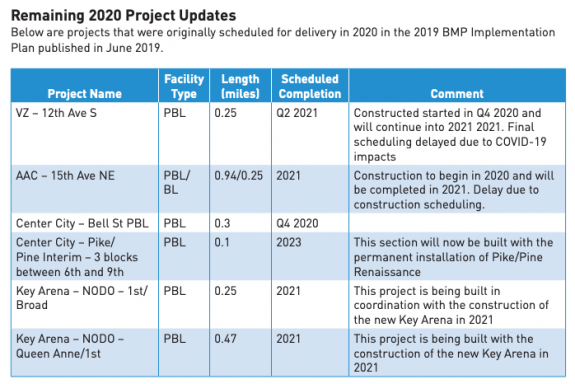 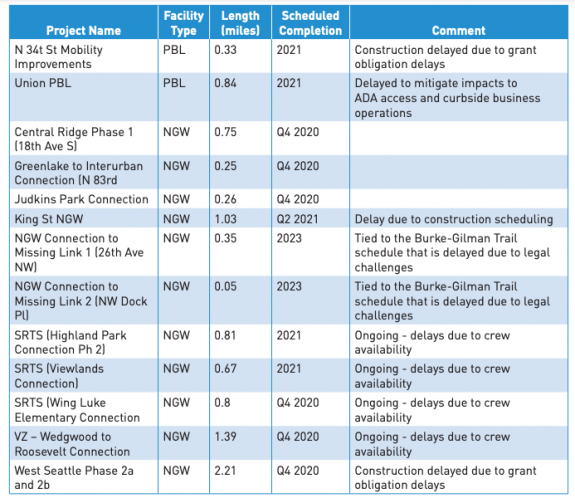 Hopefully we can get a more complete picture on the status of the program before too many additional months of 2021 progress. You can read the full 2020 status report report here.