With the fate of the West Seattle Bridge still unknown, SDOT is fast-tracking projects to improve other connections to and around the bridge. That includes the long-planned E Marginal Way remake, which has been a priority for both the Port and people biking and walking between downtown and the lower West Seattle Bridge.

The primary route between West Seattle and the Duwamish Trail and places north of Spokane Street, E Marginal Way can be a scary street to bike on today. It is one big reason more people don’t bike to and from West Seattle more often. Riding on extremely deteriorated pavement with only a painted line between you and big trucks from the Port just is not comfortable for a lot of people.

And those fears are sadly not unfounded. Lance David was killed in 2013 in a collision at S Hanford St with someone driving a semi truck. David’s tragic death and the public call for safety fixes was a major reason this project became a priority for the city, both in the form of some immediate bike lane improvements and adding the street to the Move Seattle Levy for the bigger rebuild they are working on now.

The major design elements are pretty much in stone now that the project is at 90% design, though SDOT is seeking feedback on smaller details like wayfinding and such (survey closes TODAY, July 6). From the Alaskan Way Trail terminus at S Atlantic St to S Horton St, there will be a two-way bike lane on the east side of E Marginal Way. Heading southbound at Horton, people biking will have the choice of either crossing the street at a new traffic signal to a two-way bike lane on the west side of the street to connect to the lower West Seattle bridge or continuing straight to head toward Georgetown: 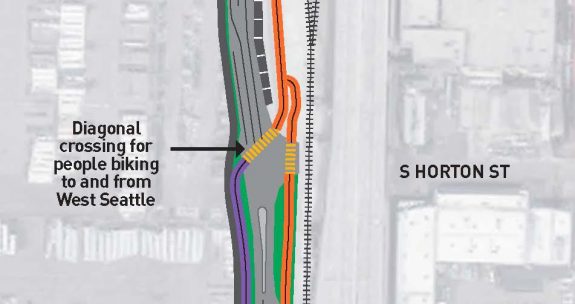 The design is the result of a ton of public outreach and conversations with the Port. It may be unusual, but it has buy-in from the Port and local bike advocates like West Seattle Bike Connections.

SDOT hopes construction can start in early 2021 and finish in 2022.

The survey also discusses some rough construction detours. There will be a period of 10-12 weeks when people biking will either need to ride in mixed traffic or share an eight-foot sidewalk with people walking. But the pay-off will be so worth it. 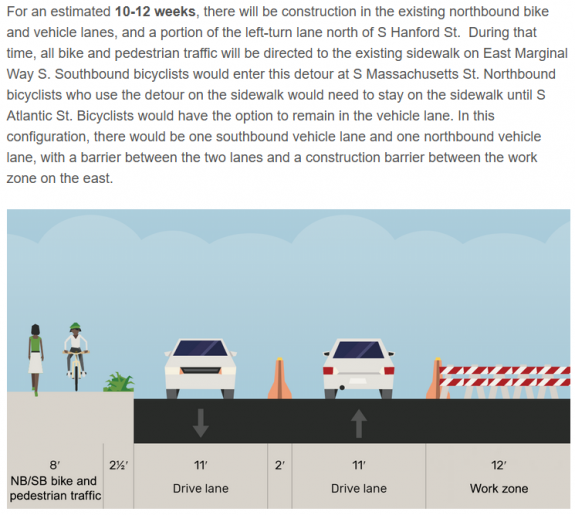 We are excited to share that we have reached the 90% design milestone for Phase 1 of the project. Major project elements have been finalized, but we still need your feedback on details such as wayfinding signage and expected impacts and detours during construction. Click here to take the survey.

At this time, we expect to complete design of Phase 1 later this year and move into construction of this work in 2021. Phase 1 construction includes the following:

We used your feedback from the 60% design survey to make some improvements to the design of Phase 1. The biggest changes you’ll see are:

We continue to pursue funding for other segments of this project. For review of our federal grant proposals, along with more information about project features and schedule, please visit the project website. To ask questions or share comments, email the project team at [email protected]

This entry was posted in news and tagged marginal way, port of seattle, sdot, west seattle. Bookmark the permalink.

6 Responses to E Marginal Way remake and bikeway heads into final design, construction could begin in 2021