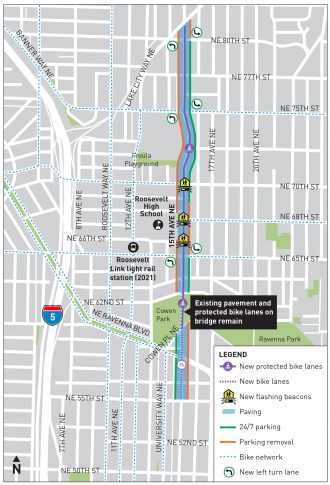 Designs for the 15th Ave NE paving project are compete, and they include bike lanes from (almost) Lake City Way to NE 55th Street, most of which are protected bike lanes.

There’s a lot to like about the project, which will add a lot of connectivity to the area. But the bike protection disappears in key places, undercutting much of the potential for the project.

First, the good stuff. Thanks to the NE 65th St bike lanes that opened in 2019, the new 15th Ave NE bike lanes will connect to the under-construction Roosevelt Station. Construction is scheduled to begin this summer and wrap up in fall 2021.

Lake City will also (almost) get a much better connection to the heart of the north Seattle bike network, Roosevelt High School, Ravenna Park and the U District.

For most of the distance, the bike lanes will be protected by either a paint-and-post buffer or a row of parked cars, as shown in the city’s diagram:

However, this diagram and the city’s project map are misleading because the bike lane will not be protected for the entire distance. In fact, the bike lane will disappear entirely for the block and a half south of Lake City Way NE, the official design documents (PDF) show:

This means people biking north will lose all protection from traffic at the exact moment they need it most: The business district and the very busy Lake City Way crossing. The decision to end the bike lane a block and a half early also severely limits the benefit to all Lake City residents, who will still need to bike either in mixed traffic across a state highway or on sidewalks through the businesses district, neither of which are appealing options.

This is a huge missed opportunity that severely undercuts the rest of the project. It is also not made clear in the outreach materials that the bike lane will not reach Lake City Way NE. Only those willing to dive into the big, dense construction documents would know the truth.

This omission is reminiscent of the Columbian Way S bike lane debacle on Beacon Hill last year in which neighbors did not learn that bike lanes would not actually reach Beacon Ave S until they saw the paint on the ground. The lack of a bike connection was omitted from outreach materials. SDOT went back and completed the Columbian Way bike lane late last year. The Columbian Way omission was a bit more egregious than this one, since that design was changed at the last minute without telling anyone.  In this case, even the 60% design documents showed the bike lane gap near Lake City Way NE, though the outreach materials do not mention it. Residents and safe streets advocates should not need to scour dense design documents to make sure SDOT’s outreach materials are accurate. The result is that advocating for a change now is a lot harder than it would have been a year ago, since the design is now ready for construction.

The protection will also disappear at major intersections, including NE 75th St and NE 65th St, turning into skinny paint-only bike lanes. These changes are also not noted in the project map on the city’s website or in the official fact sheet. The map shows protected bike lanes as a solid line and paint-only bike lanes at a dotted line. The line is solid from Lake City Way to Cowen Pl NE without interruption, but here are the NE 75th St and NE 65th St intersections in the design document:

The intersection with NE 65th St in particular feels like a missed opportunity to provide full protection for bike users, such as a protected intersection. Our city does not have many intersections where two streets with protected bike lanes cross like this, especially for two routes where a lot of turning movements are expected. The current design does as little as possible to help people make turns, basically painting little green boxes for people to maneuver into and wait.

Ultimately, there is a lot to like in this project. But a few decisions to bail on the bike protection when it is needed most undercuts the rest of the improvements. A bike route is only as comfortable as its least comfortable section, and even a single stressful intersection can make people think twice about making a trip by bike.

The decision to bail on the protection south of Lake City Way has cut off everyone who lives north of that street from reaping the benefits of the rest of the project. Lake City Way is a major barrier that divides the neighborhood, and this project could have helped people get across it.

Bike lanes, especially protected bike lanes, are also key pieces of complete streets, and their safety benefits extend to people walking and driving. So ending the bike lanes early also eliminates opportunities for other road safety improvements such as a major crosswalk improvement in the business district at Lake City Way. The very long, angled crosswalk across 15th Ave NE at Lake City Way will not be getting any shorter under the city’s plan. Shorter crosswalks are safer and more comfortable because people using them spend less time in the path of turning cars. With protected bike lanes, the city could shorten the time people spend walking in front of car traffic by almost half. That’s a big deal. Instead, the city will build four lanes for general traffic, including a right turn lane and whatever you call this pointless disappearing lane:

The city budget is about to be in crisis due to the covid-19 outbreak and the unplanned West Seattle Bridge emergency. We have no idea yet what all this will mean for other transportation projects, but it’s not good. We need to be getting the most benefit possible from all our investments, especially expensive repaving projects like this one. So yes, I’m focusing on a small bad section in a longer good project. But it’s important to get these details right the first time so we get the most for our money and so we don’t spend more money later fixing them.

Founder and Editor of Seattle Bike Blog.
View all posts by Tom Fucoloro →
This entry was posted in news and tagged 15th Ave NE, sdot. Bookmark the permalink.