One idea for socially distant outdoor space: Make roadways like Lake Washington Blvd and the I-5 Express Lanes car-free

Seattle this week closed parking lots at eight busy parks to discourage congregating and enforce social distancing. This was a wise move, as crowds were a bit too dense in many places, including Alki Beach, Seward Park, Green Lake and Golden Gardens.

But while closing parking lots is one way to reduce the number of people gathered in those places, the city, county and state should also consider opportunities for opening more wide-open space to recreation so people can safely and responsibly get around if they are headed to the grocery store or an essential job, or get outside if they are just trying to get some exercise and unwind from the stress of it all.

Traffic has plummeted across the city, which is great because that means people are staying home. It also means that there is a lot of excess street space lying around right now, an asset we might be able to put to better use during this time.

This conversation has been going on in cities all over the world, and really gained steam when Bogota, Colombia, made some of its world-inspiring Cicolovía routes open 24/7 to help people get around without packing into crowded transit. But, of course, Bogota has been hosting these massive open streets events for decades, so they have it down and residents are familiar with them. It is a much bigger ask to request that a city start a whole new open streets program in midst of the COVID-19 shutdown.

Open streets, especially on busy streets through dense areas, will likely require a ton of coordination, communication and on-the-ground workers in order to make them safe and functional. In general, the more intersections (especially big intersections) along the route, the more money and staff are required to make them work as part of an open streets event. As much as I would like to say the city should create a citywide network of car-free streets, I know that such a project would be immense and require a significant budget and a lot of staffing. I would love to be wrong, but I doubt this is a reasonable use of city resources at this exact moment in time.

However, Seattle doesn’t need to start from scratch. Like Bogota, we have experience with open streets that we could enact right now without dedicating a ton of resources.

For example, why not make every day Bicycle Sunday on Lake Washington Boulevard? We have been holding Bicycle Sunday for more than half a century, so people know the drill. And this would help solve the problem of overcrowding at Seward Park and on trails in the area, which are simply not wide enough to give at least six feet from other users:

Problem: Just went on a run and it was impossible to maintain a safe distance along Lake Washington Boulevard and Coleman Park. And this was at 4pm on a weekday.

Solution: We should implement permanent open streets along these and other parks to reduce dangerous crowding pic.twitter.com/yLDSimENxj

We also have experience closing many streets for various events. Pike Street and 11th Ave on Capitol Hill could close to car traffic, which might take some pressure off Cal Anderson Park. Alki Ave SW has been closed many times for Summer Streets and other festivals. Some of these events have been held by SDOT, others by Seattle Parks. This might be a good time to open up those files and assess what is feasible without a ton of extra cost and workforce.

There may also be stretches of streets along parks, steep hills or waterways that have no or very few intersections and could be made car-free with relatively little work. Interlaken Drive was car-free for months back in 2011 and it worked great. And it only required two “road closed” signs. The same could probably work for, say, Cheasty Blvd S or Fairmount Ave SW or either of the roads named Carkeek. Basically, those wonderful, winding and wooded streets tucked away in neighborhoods throughout our beautiful city could be put to better use by going car-free. It’s like dropping a new park into the neighborhood, and this one has a path wide enough to maintain at least six feet at all times.

Perhaps the city could even repurpose its Play Streets program, which allows neighbors to apply for free permits to close sections of their residential streets to create more space for kids to play and community to gather. People who live on those streets can still slowly drive to their homes, but through traffic is not allowed. Usually Play Streets have limited duration, but maybe those restrictions could be loosened. Because while Play Streets and block parties are usually about bringing people together, they could also be used to give people walking more space to stay apart. And as the parent of a toddler, I know we are really struggling to find spaces near our home where she can get her ya-yas out. And she has so many ya-yas. So many…

The city should also think about freeing up specific pinch points for people out walking or biking, especially bridges. Maybe it makes sense to close the outer two lanes on Fremont Bridge so people walking can use the sidewalk and people biking can have a lane on the main deck. It’s nearly impossible to cross the Fremont Bridge right now without breaking the six-foot rule. And since the Army Corps of Engineers closed the Ballard Locks to people walking (including people walking their bikes), it also makes sense to turn the outer lanes of the Ballard Bridge into bike lanes. It is difficult for two people to walk or ride past each other on those sidewalks without touching, and maintaining six feet of separation is a joke. 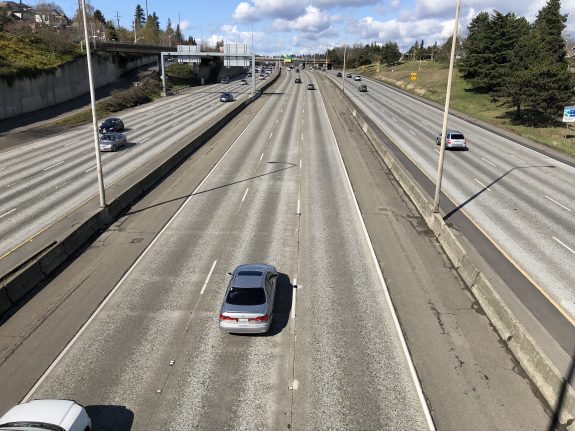 Looking north from NE 45th Street at 3:15 p.m. on Wednesday. The center three lanes are the Express Lanes.

And then there’s I-5. Even during rush hour, there is plenty of space on the main sections of the freeway to handle all the traffic. That leaves the Express Lanes largely unnecessary, a great opportunity to open a ton of space to people from Northgate Mall to City Hall. And we also have experience making these lanes car-free. In fact, WSDOT does it every night.

We know it can work because Cascade Bicycle Club has hosted their Emerald City Ride on the Express Lanes for years. And we already have the necessary traffic controls in place because the state lowers the arms to close the access points every night. So making the Express Lanes car-free really shouldn’t require a ton of resources. The hardest part would likely be figuring out a solution for the buses, mostly commuter routes, that use the lanes.

To give you an idea of how much space this would open, each of the lanes in the photo above are somewhere between 12 and 15 feet wide. So users could keep a lane distance from each other and be more than double the recommended spacing from each other. At 60 feet wide and about 6.5 miles long, that’s over 2 million square feet of space. But though that sounds like a big number, I’m not sure how many people the roadway would be able to walk and bike at the same time before bunching begins. Cascade’s 7,000 riders for the Emerald Ride regularly bunched up, though that event was condensed into a couple hours rather than spread out through the day. And, of course, we weren’t trying to stay apart during those rides. Ahhh, remember getting together to have fun? That was great.

And that’s sort of the oddest thing about proposing an idea like this right now: Open streets events like these are usually great opportunities for community building and celebration. And right now we need be to stay separate, and we have a lot of work to do fighting the spread of this virus to earn a celebration.

Perhaps the best way to think of how open streets can help is by thinking of it as a harm reduction strategy. Exercise is good for people, and many are going to do it. But if the only spaces available are skinny sidewalks or destination parks, then those will be crowded and cause harm. So maybe by creating more space so that those who go out for a walk or bike ride can do so with proper social distancing, we can avoid taking the dramatic step parts of Italy and Spain have taken: Banning outdoor exercise entirely. I really hope we don’t get to that point.

This entry was posted in news and tagged covid-19. Bookmark the permalink.

11 Responses to One idea for socially distant outdoor space: Make roadways like Lake Washington Blvd and the I-5 Express Lanes car-free