Seattle’s new bike corrals are more versatile, easier to use and cost 1/3 as much 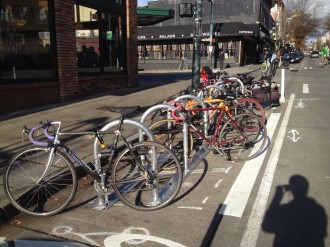 Here’s a rare story of government transportation efficiency: Seattle’s Department of Transportation has started installing on-street bike corrals that are easier to use, more versatile and expandable, and cost just a third as much as the ones they had been using.

The bike corrals are designed for use in high-density areas where the demand for places to securely lock a bike outpaces the space available on sidewalks.

And you don’t have to take my word for it. University Greenways documented the issue in a November 2011 report:

Presently, University Way does not offer an adequate supply of safe, convenient, and reliable bicycle parking. Unfortunately, this shortage is especially pronounced in the stretch of University Way that could be most easily accessible to potential customers on bicycle from the University of Washington, centered around 42nd St. and University Way. Customers on bicycle are currently reduced to locking their bicycles to signs, parking meters, and even garbage cans.

An audit of the 41st-42nd block of University Way revealed unmet demand for bicycle parking. Every bicycle rack was at its capacity, yet the majority of bicycles were observed to be locked to objects other than bike parking racks. 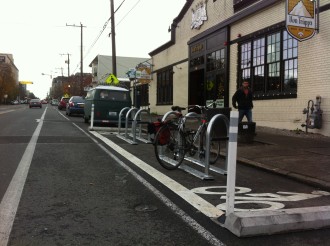 This situation is not unique to the U District. There are plenty of business districts where customers and employees are left locking to trees, fences and other structures, sometimes in annoying places and sometimes in places that are less secure than a proper bike rack.

A fascinating fact about bike corrals noted in the University Greenways report: A single bike corral occupies the space of about two cars and doubles the parking capacity of the entire block face. You can see why that might be appealing to business owners.

But the benefits of bike corrals extend far beyond just adding space for parking bikes. They also make it easier for passersby to see the storefront behind it from the street. This is obviously a good thing for retail shops and restaurants.

And yes, they can even make a street safer by reducing collisions caused by poor visibility when cars are parked too close to a street corner. 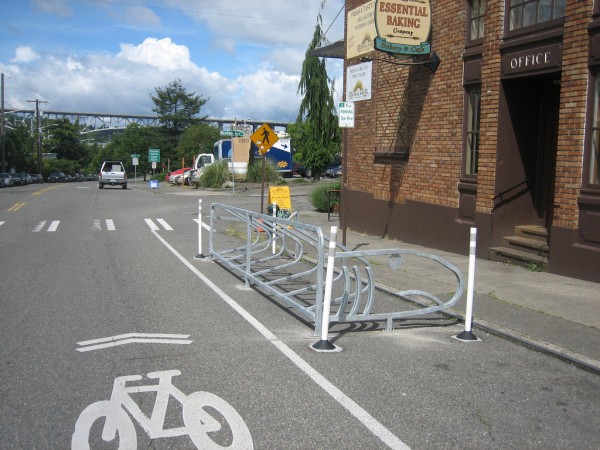 The old style of on-street bike corrals were heavy, arty metal designs. They are cool-looking and very secure, but they have some downsides. They can only be accessed from the sidewalk, making them a bit more difficult to use. This is the style installed near Bike Works, and Stumptown on 12th among other locations. The cost per bike for those racks was $257. That’s a steal considering how insanely expensive a single car parking space can be.

The new style, which is included in the pending Bike Master Plan, can be accessed from either side and is modular in design. Bike parking can be more easily designed to match the different needs of different streets, and it can be expanded as demand increases.

The price per bike parking space in the new style: $87.

Bike parking work picks up in winter months when weather prohibits a lot of road work. The city recently installed a handful of the new-style bike corrals in the Central District, Capitol Hill, South Lake Union, and Wallingford. This brings the city’s total number of on-street bike corrals in the city to 15.

The city installed 400 bike parking spaces around the city in 2013, and they plan to increase that number to more than 500 in 2014. Here’s the list of existing on-street bike corrals:

15 Responses to Seattle’s new bike corrals are more versatile, easier to use and cost 1/3 as much