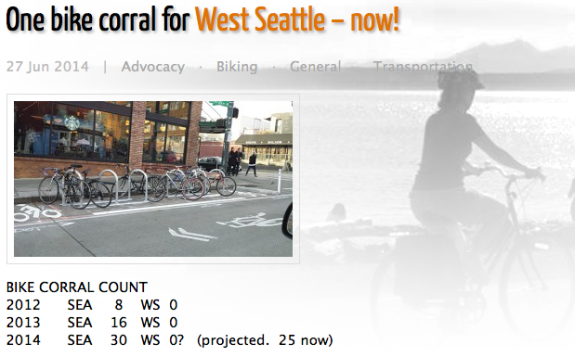 Seattle has been doing a great job installing on-street bike corrals around town this year. Well, maybe not ALL around town. West Seattle still does not have a corral despite demand for one in the Junction business district, and residents have taken to writing open letters and urging elected officials to get involved and help make it happen.

On-street bike corrals make the most sense in business districts where demand for bike parking and sidewalk space make it difficult for people biking to lock up without blocking other sidewalk uses. A sidewalk bike rack might work fine when there are just a couple businesses around. But on streets filled with destinations, bike parking often needs to be moved into the on-street parking area. It makes it more comfortable for everyone and adds parking capacity for the district, since 12 or so bikes can fit in the space used by one parked car.

So far, most the city’s bike corrals have gone into the highest-demand areas in town, like Capitol Hill, Fremont, the U District, the Central District. And they keep coming:

West Seattle’s Junction is the perfect space for a corral. Lots of businesses, skinny sidewalks and the need for more customer capacity. But West Seattle Bike Connections is tired of waiting for one, so they have formed a coalition and have started asking the city publicly:

They have also written a more detailed letter spelling out why the rack should be installed at the corner of Alaska and California. The letter was posted by West Seattle Blog.

Meanwhile, White Center businesses and residents held a meeting to discuss bike parking needs in the 16th Ave SW business district. A few years ago, some not-entirely-anonymous people installed some not-entirely-legal bike racks in the area, but they are not enough.

Now, discussions are underway to install a bike corral among the many car parking spots in the area. If people agree and make it happen, it could be among the first modern on-street bike corrals in King County outside Seattle. It was also be great for White Center businesses.

As this photo demonstrates, the demand is there: