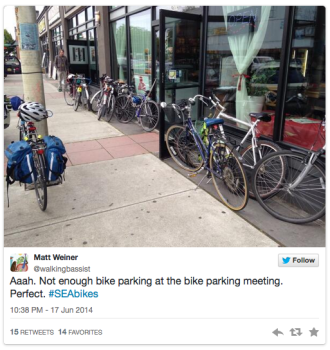 A group of White Center businesses are still working to solve their street’s bike parking crunch by converting two car parking spaces in front of Proletariat Pizza and Caffe Delia into a bike corral for 20 bikes.

But being (just barely) outside the Seattle city limits means they can’t simply request one through Seattle’s bike parking program, so they are forging new territory in King County. the White Center Community Development Association applied for and won a King County grant to make the corral happen, and supporters have been working to educate others in the community about the benefits of having enough secure and convenient bike parking.

There will be another community meeting to discuss the project at 6:30 p.m. Tuesday at the Sheriff’s storefront on 16th Ave SW just south of Roxbury.

There is resistance against the idea, which is one reason it has been delayed so far. Here’s a recent note from Proletariat Pizza via facebook:

A couple of Proletariat customers have been busting their asses to secure a grant to build a bike corral on 16th in downtown White Center. Bike parking=good, right? Unfortunately many business owners in White Center are against the bike corral and have been speaking louder than the supporters on this issue. Please join @Proletariat Pizza and Caffè Delia at a community meeting on Tuesday August 26th at 6:30pm at the Sheriff Storefront across the street. Please send any letter of support to sokha (at) wcccda (dot) org as well as bong (dot) stodomingo (at) kingcounty (dot) gov
It’s unfortunate to see such resistance against something so positive for our community, when other neighborhoods are embracing this so wholeheartedly. We know many of you are biking families, and many of you are bike-parking supporters. We hope to see you there. Thank you.

White Center Now reports that better bike parking has been in planning documents for years, and the debate comes as The Junction is also increasing bike parking:

North of White Center, West Seattle’s first official bike corral was installed in The Junction just last month. Seattle now has 26 bike corrals, according to the city website. Portland has four times that, according to its website.

Looking back at downtown White Center’s history, the angled parking dates to 1992. Branching out into a multimodal transportation system was foreseen in the 2007 “We Create White Center” report, which includes the goal (on page 15) “Create a community that supports and encourages bicycling as a mode of transportation,” and recommends “increased bicycle racks” (on page 95).

This block of White Center has a history of leading on bike parking. In 2011, several businesses conspired to install a bike rack on the sidewalk in front of the Sheriff’s storefront complete with a sheriff’s star. And though the rack was not exactly legal, deputy BJ Meyers loved it.

But the need for bike parking has far outgrown the few sidewalk bike rack options available, and it’s time to upgrade to a bike corral, supporters say.