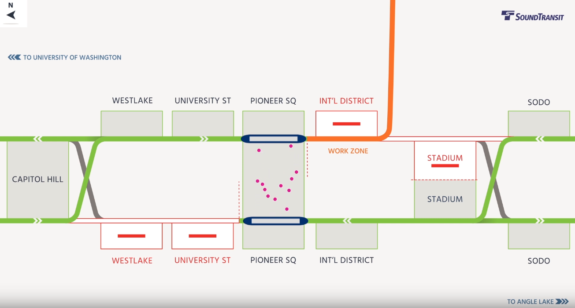 From a Sound Transit video.

Construction work to connect the existing light rail tracks to the new East Link tracks will require a very tough couple months in January, February and March 2020. Dubbed “Connect 2020,” train frequency will be dramatically reduced, and every passenger will need to switch from one train to another by crossing a new temporary center platform in Pioneer Square Station.

Imagine two crush-capacity trains unloading every passenger across a single center platform at the same time. Here’s a video explaining how it will work:

Trains will only run every 12 minutes all-day, compared to every 4–6 minutes during rush hour currently. Every trains will be full-size four-car trains, but this still means they will significantly more crowded (assuming people don’t divert to other modes, like buses, biking or driving).

Understandably, Sound Transit staff is concerned about how crammed that center platform will be during the transition, and they have decided that trying to bring a bike through the crowd won’t work and could even be a safety hazard. So people with bikes will be asked to exit at University Street and International District Stations. 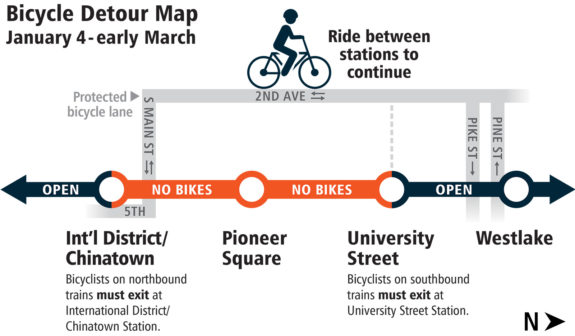 While I would usually be against bike restrictions, this one does seem reasonable. And the good news is that SDOT rose to the challenge and made sure the south downtown bike connection was completed before Connect 2020 began. So people will be able to bike between ID and University Street Stations entirely within a protected bike lane. This was not an easy bike lane to build, but it is so important that the city completed it before this light rail project began. It will make the 10 weeks or so without bike access so much easier and welcoming for people with bikes who are not familiar with or are nervous about biking downtown. And it’s a great example of agencies working together to keep everyone moving.

Light rail service will be completely closed between Capitol Hill and SODO on the weekends of January 4–5, February 8–9 and March 14–15. The reduced service will begin when trains restart following the first weekend closure in January.

Sound Transit is also launching new on-demand bike lockers at UW, SODO and Rainier Beach Stations. Operated by BikeLink, the lockers will charge 5¢ per hour on a first-come, first-served basis. So if you are only bringing your bike on the light rail because you don’t want to leave it locked up outside all day every day, a bike locker might be a good solution for you. You have to buy a $20 card from BikeLink’s website, but it comes with $20 in credit. So if you become a regular user, the card is free. It takes up to five days to get it in the mail, though, so don’t delay on ordering if you are hoping to use the lockers starting on day one of reduced service.

These are the same bike lockers as the ones King County Metro uses at various transit centers and park-and-rides, including Northgate Transit Center. So your BikeLink card will work for either agency’s lockers, which is great.

The beginning of this video shows how the lockers will work:

UPDATE: Some readers were curious about the potential for ORCA Card integration with the BikeLink lockers. The company noted on Twitter that they hope to eventually allow users to use their ORCA Cards as a sort of key to access the system, but that you will still need a BikeLink account and all charged would go through BikeLink, not your ORCA e-purse or pass. They would really just be using the ORCA Card as a unique identifier for your account so that you can carry one fewer card in your wallet. BikeLink is also working on an app, which could dramatically speed up the process of getting access to the lockers.

Founder and Editor of Seattle Bike Blog.
View all posts by Tom Fucoloro →
This entry was posted in news and tagged bike lockers, connect 2020, sound transit. Bookmark the permalink.