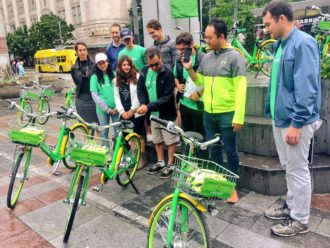 The ceremonial unlocking of the first LimeBike July 27, 2017 in Seattle.

Lime announced today that they will be pulling their e-bikes from Seattle streets December 31.

This follows a week and a half of rumors that the company was shutting down, rumors the company denied to both Seattle Bike Blog and The Urbanist. As recently as December 15, a company spokesperson told Seattle Bike Blog that Lime would remain in operation until at least March, around the time when the long-awaited scooter pilot is due to be rolled out.

But an email to users on Christmas Eve, Lime announced they would, indeed, be shutting down service, though they “remain very committed to working with the City of Seattle to create a robust mobility program in the Spring that includes a mix of free-floating scooters and improved bike options that are a priority to the City.”

Lime was the last of the original three bike share companies to launch in Seattle in the summer of 2017. Spin, one of the other three original companies, has since switched to scooters and has stated in the past that they are interested in operating scooters in Seattle.

The loss of Lime comes just as Sound Transit is preparing a major multi-month service reduction on light rail service downtown as they work to connect the East Link tracks to the existing line. Bike share could help relieve pressure on the crunched downtown trains, so let’s hope JUMP sticks around.

As we head into the winter season, we have already reduced our e-bike operations based on demand. Given our current permit expires at the end of the year, we are removing our bike fleet by December 31. We remain very committed to working with the City of Seattle to create a robust mobility program in the Spring that includes a mix of free-floating scooters and improved bike options that are a priority to the City.

We understand that this will impact some of you. Our hope is to work with the City to create a strong multimodal micromobility system to serve the City long into the future.

We appreciate your role in making Seattle a great place for bikes and scooters, and look forward to seeing you in the spring!

This entry was posted in news and tagged bike share, lime-e, limebike. Bookmark the permalink.