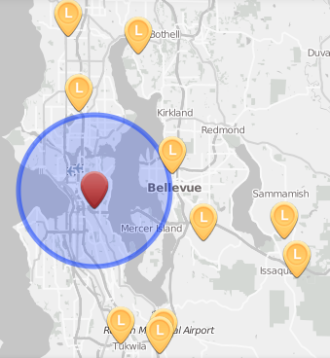 King County’s new bike lockers have one key difference separating them from previous lockers installed in the region: The BikeLink lockers are available reservation-free and on-demand.

You can get a card online here. The $20 card comes preloaded with $20 in parking money, and using the lockers costs $0.05/hour.

Bike lockers are a convenient way for people to combine biking and transit for super fast, affordable and efficient trips around the region. Skip the slow, local bus (if one even exists where you live) by biking to a transit center and securely storing your bike before hopping on an express route. Since bikes left at transit centers are easy targets for theft, secure storage options (even ones that cost money to use) are important for this bike/transit combo to work.

The trip is even faster if you bring your bike on transit with you. In fact, odds are good that a bike/bus commute like this will be the fastest way to get where you’re going. But putting your bike on a bus has a serious problem of scale: Only two or three bikes can fit at a time, and many King County Metro bus routes already have full bike racks often enough to make it unreliable way of getting around (this is also a great, underutilized selling point for folding bikes, which you can bring on board with you).

But the true need for secure bike parking at transit centers will come when bike share launches. Imagine this commute to downtown: Bike from home to the nearest express transit station, secure your bike (at $0.05/hour, that’s just over $2/week assuming a standard 9-5 work schedule), hop on an express bus or train to downtown, then finish the journey with a short jaunt on a bike share bike to your workplace.

Here’s a King 5 report on the new lockers:

Here’s an instructional video on how to use the lockers (Note: Ignore the second half of the video about group lockers):