SDOT crews are set to start work on Pike Street bike lanes this weekend between Broadway and 9th Ave, Capitol Hill Seattle reports. Work is expected to last a week.

Community groups like Central Seattle Greenways have led outreach for this project to an almost unprecedented degree. In addition to a big public workshop in 2018, groups have conducted a ton of business outreach in recent years. Community groups even helped secure funding for a much grander future reimagining of Pike and Pine Streets as part of the Washington State Convention Center expansion’s “community package” of public benefits.

The bike lanes going in this week are largely thanks to a City Council resolution last summer that listed it as a 2019 priority. The project will almost connect the Broadway Bikeway to the 2nd Ave protected bike lane with frustrating gaps between 6th and 9th Avenues. It will be particularly frustrating heading westbound because 9th Ave is one-way southbound and Pike is one-way eastbound. So people biking will have to use the sidewalk, which is bad for biking and for people walking. I anticipate that a lot of people will continue using Pine Street instead because of this gap.

Pike Street bike lanes are extremely exciting. Pike and Pine are already heavily biked despite having very inadequate and incomplete bike infrastructure because these streets connect some of the city’s most densely-populated neighborhoods with the downtown core. A complete and connected bike lane will be a major and instant success.

But it is also extremely frustrating that city efforts to build bike lanes on these routes keeps falling short of actually connecting. The existing pilot bike lane on Pine disappears between 5th and 4th Avenues, for example. And now the new eastbound Pike bike lane will disappear at 9th Ave, one block short of 8th Ave, which at least connects to Pine St without needing to bike on the sidewalk. And the existing eastbound bike lane on Pike downtown will remain disconnected from the new bike lane by a stressful three blocks of uphill mixed traffic biking next to the convention center. 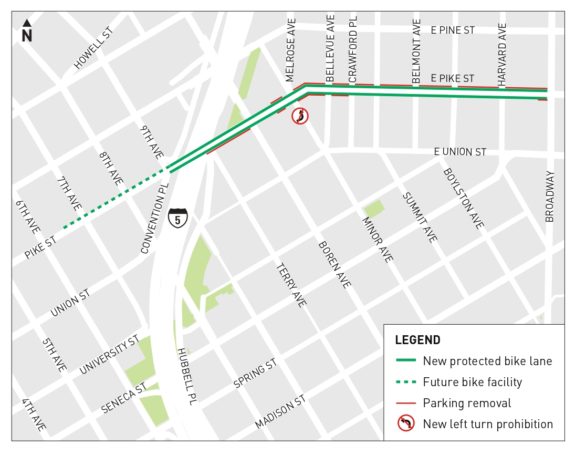