Should the next Ballard Bridge be high, low or in between? 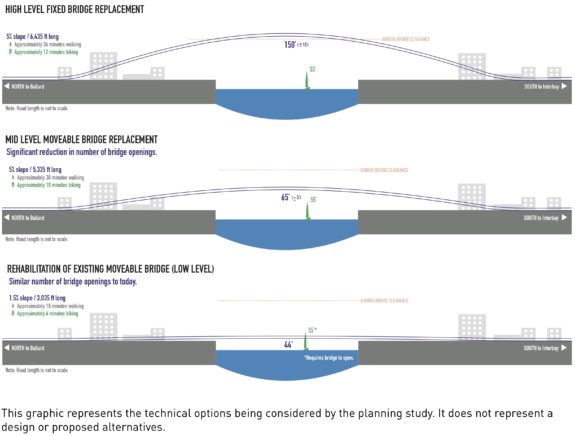 The city is currently conducting an early, fairly high-level study of the options for replacing the Ballard Bridge. The actual project is pretty far away and has no funding, but this study is intended to outline the pros and cons of various options and gather public feedback.

For a while, long-term planning for the Ballard Bridge was on pause because there was a chance Sound Transit was going to route light rail line over the bridge, which would have been a good excuse to rebuild it at the same time. But Sound Transit . UPDATE: I jumped the gun here, sorry. It’s still not clear whether Sound Transit will pick a tunnel or elevated crossing, as the Urbanist reported recently. Environmental review will study multiple tunnel and bridge options.

The Move Seattle Levy included $700,000 to start planning the next Ballard Bridge, and the team plans to wrap up that study by the end of the year. The study will not even recommend a preferred alternative, but will provide information needed to take the next step for deeper analysis. Projects of this scale typically move very slowly, and the bridge is not a serious earthquake risk thanks to a seismic retrofit a few years ago.

However, the bridge is a serious bikeability and accessibility barrier due to its very skinny sidewalks. And this was apparent from their survey results, which saw a lot of participation from people who bike and walk (good work!). 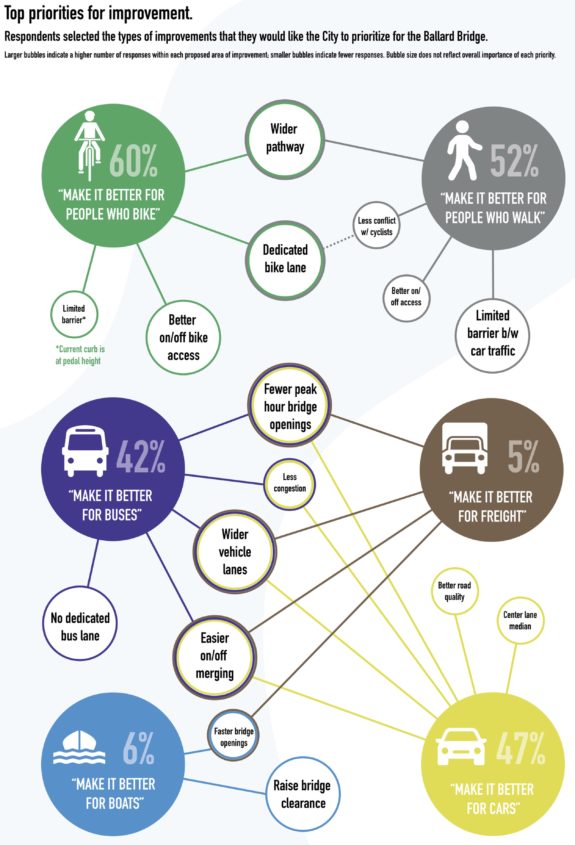 The city outlined three basic options for the bridge design: Remaking the current draw bridge profile, a somewhat taller draw bridge that would open less often and a bridge so tall it would never need to open.

Unlike the Aurora Bridge, which is tall enough that it does not need a segment that can open, the Ballard Bridge approaches start much closer to the water level. That means the climb up to the bridge peak would likely be quite long and steep, including something like 100 feet of extra elevation compared to the current bridge. That’s a lot. The middle ground design would add a more reasonable 20 feet of extra climbing, and the remake would be about the same (of course).

The study does not include a level of detail deep enough to show exactly how the biking and walking connections would work. And there are also lots of questions about what to do about the approaches and ramps, some of which occupy a lot of land that could be put to better uses (especially on the south side). The Cascade Bicycle Club community group Connect Ballard outlined some of these ideas back in 2015.

Of course, long-term planning doesn’t help people using the bridge today, which can be very dangerous. The city still has not fixed the so-called “merge of death” at the south end of the west sidewalk even though people have been sounding the alarm about it for many years. And options for widening the sidewalks were found to be rather expensive. I have proposed building a bikeway on the bridge deck like the Burrard Bridge in Vancouver, BC.

Below is the timeline for the latest bridge study. For more, check out this recent post by Natalie Bicknell at the Urbanist.

This entry was posted in news and tagged ballard, ballard bridge, interbay, sdot. Bookmark the permalink.

16 Responses to Should the next Ballard Bridge be high, low or in between?