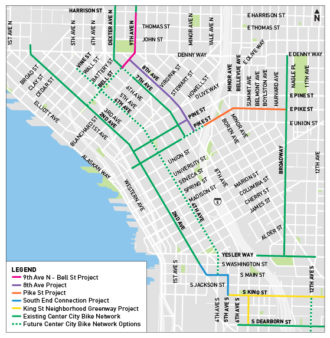 Map of the Center City Bike Network projects due for construction.

Seeing Queen Anne Greenways’ Mark Ostrow give Mayor Jenny Durkan a high five from his bicycle is the image that sticks in my head from Wednesday’s press event celebrating the opening of the 8th Ave bike lane downtown (Crosscut’s Josh Cohen captured the moment on video).

The news itself was not a big surprise today. Several projects already announced by SDOT and all but mandated by a City Council resolution are moving ahead, including 9th Ave N, 8th Ave, Pike St, 2nd Ave-to-King St, and the King St Neighborhood Greenway.

The real news is that Mayor Durkan is celebrating and promoting a bike project, a shift from her stance for most of her term as mayor. Not only that, but she acknowledged during her speech that bike projects have been delayed further than they should have.

“We know when we hit our reset, we didn’t reset quickly enough,” she said, according to the Urbanist.

This one press event will not heal relations with bike and safe streets advocates, and it also will not put the delayed bike plan back on pace. But it feels like an olive branch, and advocates from Cascade and Seattle Neighborhood Greenways took it (an olive branch on Olive Street! Coincidence?).

I hope this is the start of a change. She clearly took advice from the wrong people when she chose to cancel the designed, funded and contracted bike lanes on 35th Ave NE, and that decision has turned out to be a huge mistake. So I hope mending relationships with safe streets advocates also means she may seek advice from them in the future.

I guess the first big test will be whether she finds the funding this budget season to build the South Seattle and downtown bike lanes listed in the resolution the City Council is considering. She will also need to choose whether to fight the Council’s proposed “mandatory” bike lane ordinance. Honestly, that ordinance seems like it would be useful to her, since it could help her avoid another 35th Ave NE situation by distributing some of the decision-making pressure to the Council.

So no, this press event doesn’t mean everything is great now. But I hope it’s the start of a change in the mayor’s previous stance as a force of indifference at best and opposition at worst when it comes to safe streets projects. Because there is still a lot of time left in her term, and we have to find a way to make improvements to our streets and deliver on Move Seattle promises. That stakes are too high.