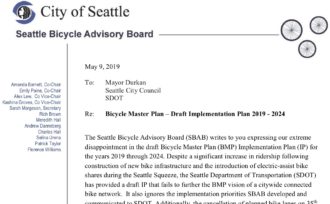 But unlike the oversight committee’s letter, which gave high-level advice, the SBAB letter includes several pages of specific needs that would go unmet in the draft plan. Their letter could be read as an olive branch to the Mayor’s Office and SDOT leaders, providing a possible path to regaining the public’s trust in their ability and willingness to deliver on the city’s bike safety and mobility.

Rather than going through the highlights, below is the full text of the SBAB letter to Mayor Durkan, the City Council and SDOT (PDF). Skip to the bulleted list for their specific recommendations:

The Seattle Bicycle Advisory Board (SBAB) writes to you expressing our extreme disappointment in the draft Bicycle Master Plan (BMP) Implementation Plan (IP) for the years 2019 through 2024. Despite a significant increase in ridership following construction of new bike infrastructure and the introduction of electric-assist bike shares during the Seattle Squeeze, the Seattle Department of Transportation (SDOT) has provided a draft IP that fails to further the BMP vision of a citywide connected bike network. It also ignores the implementation priorities SBAB developed and communicated to SDOT. Additionally, the cancellation of planned bike lanes on 35th Avenue NE and NE 40th Streets signals the City of Seattle (City) prefers to avoid political risks rather than complete the bicycle network for people of all ages and abilities.

SBAB is designated by ordinance to review and input on the required annual update of the BMP IP. Board members spent many hours meeting with people in the biking community, riding potential routes, and with SDOT staff to prioritize valuable connections. Many of the highest ranking projects do not appear in the current IP draft, nor the list of eliminated projects. It is discouraging to see our work ignored. While we do not expect the City to heed every recommendation that is given, we believe SBAB’s time and energy should be treated with respect and accounted for in the decision process. Many of the SDOT/Department of Neighborhood-led café style discussions within four City sectors confirmed similar prioritization of projects and themes as prioritized by SBAB, regardless of location. As such, we request that every project that SBAB initially prioritized be explicitly included in the IP document with an explanation as to whether it will be a funded project or not.

SBAB advocates for transportation justice for the neighbors of South Seattle: every neighborhood deserves safe infrastructure, yet South Seattle, where many of our City’s immigrant communities, low-income communities, and communities of color reside, is crisscrossed with dangerous routes for bicycles and pedestrians. Furthermore, SBAB, committed to the City’s Race and Social Justice Initiative, wants to correct past inequities that previously enabled miles and dollars focused on projects north of the ship canal. In response, SBAB prioritized many projects in South Seattle. With only six years left on the Move Seattle Levy, the City must take the opportunity to invest in planning for the key citywide network routes of South Seattle. The communities most historically underserved by transportation projects have waited for safe connections to jobs, schools, and services should not be left even further behind due to insufficient funding in 2025.

SBAB advocates for a connected network: citywide routes that are “all ages and abilities” between neighborhoods and that also complement and connect to the region’s urban villages, expanding light rail, and transit networks. The current draft IP excludes many projects that support these goals; instead, many projects are a patchwork of routes that stub-end or lead to roadways that are not all ages and abilities.

As stated in our guiding principles, SBAB’s highest priority projects are ones that promote equitable transportation options and increased connectivity to complete a citywide bicycle network. We believe that the following projects and themes, many of which are missing from the current draft IP and reiterated by the community in the café style discussions in April, would be the most transformative in achieving these goals. Projects often meet several themes and are purposefully redundant to provide justification for being the most important for the City at this time:

Key to advancing the City’s vision of a network of bike routes connecting our City is funding to pay for the transformational projects listed above. While some programs funded by the Move Seattle Levy were on track to deliver close to expected outcomes prior to the reset, the bike program is slated to deliver only 60% of projects. In partnership with a letter passed by the Move Seattle Levy Oversight Committee dated May 7th 2019, SBAB asks the City to bolster funding, find ways to speed delivery of crucial projects, and to put project delivery on parity with other modal programs within the Move Seattle Levy. SBAB also requests the projects listed above be advanced in planning above all other projects listed in the current draft Implementation Plan to the point that even if there is currently no identified funding source, they would be ready to advance should grant or other funding opportunity arise.

SBAB implores our political leaders to deliver on the commitments made in the numerous adopted policies and plans including the Bicycle Master Plan, Climate Action Plan, Vision Zero, Safe Routes to School Program, the Race and Social Justice Initiative, the Complete Streets Ordinance, and the Comprehensive Master Plan, as well as the voter approved Move Seattle Levy. These policies demonstrate the City’svalues – safety, equity, sustainability, livability, health, and vitality – and represent the result of countless hours of public process.

SBAB asks the City to honor the aforementioned commitments by making decisions that aligned with the City’s goals and policies and informed by feedback provided from City Boards, Commissions, and Committees. Based on recent reversal of projects mentioned in the beginning of this letter, public trust has eroded in the City’spolitical will to implement or support bicycle projects. We fear that a precedent has been set, that a loud, angry minority, who is not representative of our racially and socioeconomically diverse city, can overrule years of citywide public process and adopted city policy. Please prove us wrong.

This entry was posted in news and tagged jenny durkan, seattle bicycle advisory board. Bookmark the permalink.