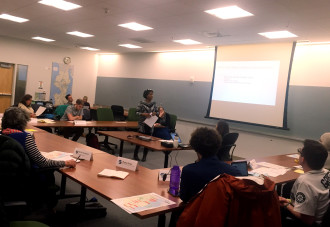 Then-member and now City Council candidate Phyllis Porter presents ideas about Rainier Valley bike routes to the Board in 2016.

Applications are open for a seat on Seattle’s volunteer Bicycle Advisory Board (“SBAB”). So if you want to volunteer your time to help the city make bicycle investments and influence bicycle policy, you should apply by July 28.

No professional expertise is required. In fact, some of the most effective board members have been regular ol’ Seattle residents who just want to learn, ask questions and offer their thoughts as people who ride bikes and want to help their city do better. Did you know Bill Nye was once an SBAB member? What I’m saying is, you could be Bill Nye.

The Board had made excellent strides in recent years to diversify its representation and leadership, and women of color have been co-chairs of the board for years. But the Board has lost some members of color in the past year (including Mayor Jenny Durkan’s controversial decision to oust Co-Chair Casey Gifford in November). People of color, women, LGBTQ folks, people from immigrant and refugee communities, people with disabilities, and people of all ages are encouraged to apply.

Send a resume and cover letter to [email protected] by July 28. Learn more in this SDOT blog post.

The State of the Bike Board

As a reporter who has been covering Seattle Bicycle Advisory Board (“SBAB”) meetings since 2010, these are some of the most interesting — and frustrating — times for the volunteer board. For years, the Board was focused on helping advise SDOT on crafting plans, including the Bicycle Master Plan, commenting on individual project details and helping to prioritize the  city’s annual work plans. This was, of course, important work.

But in the past year and a half, as Mayor Jenny Durkan’s administration has dramatically cut or delayed bike investments, the Bicycle Advisory Board has been a consistent and principled conscience for city leadership, unafraid of giving advice leaders don’t want to hear. They have been unrelenting for years in their unanimous opinion that Seattle needs to focus on investments to connect south Seattle to correct the city’s history of building most bike lanes north of I-90, for example. Unfortunately, SDOT has ignored their advice and released a bike work plan largely lacking in southend commitments.

Of course the city has not always listened to this volunteer advisory board, and they don’t legally need to. SBAB has no actual power. But the city would be wise to support the current membership and take their advice seriously because they are providing our city with a wonderful and thoughtful service.

The Board has very few second-term members left at this point, and many of the volunteers are up for a term renewal. Rules already limit members to two two-year terms, which is effective at ensuring the same voices do not consistently run the table and control conversation. It is useful to have a mix of first and second-term members because having some institutional knowledge helps the board conduct business much more efficiently and effectively. And in my decade of covering the Board, any volunteer willing to sign on for a second two-year term has been allowed to do so (and should be thanked for being so generous).

But that changed in November when Mayor Durkan’s Office ousted former Co-Chair Casey Gifford just hours before what would be her final meeting. And a representative from the Mayor’s Office has told the Board that the Mayor plans to open all her seats, including those held by members up for a second term, to new applicants (the Mayor appoints half the Board and the City Council appoints the other half). Sure, the mayor is allowed to do this, but it’s unprecedented in my decade of covering this Board. And given the way the Board has been critical of recent bike plan cuts, it feels a bit petty and disrespectful of these volunteers’ time.

To make things worse, Gifford was a woman of color leading the Board, so her surprise ousting sent all the wrong messages about how welcome the Board is to people of color. I hope applicants know that the Board did not make that decision, and members were dismayed when it happened. Luckily her replacement, Selina Urena, has been great. This is why we need as many great applicants as possible. Even if valuable members are not renewed, Seattle needs good volunteers ready to take their seats and continue this public service.

I am not going to lie to you and say that joining the Board will be all fun and games. It is a lot of work, and it can be demoralizing when that volunteer work gets ignored by city leadership. It’s not uncommon for volunteers to burn out. But it is important work, and you will learn a lot both about transportation policy and about how the city truly functions.    You will get the inside scoop on transportation projects and have an opportunity to ask planners, engineers and sometimes politicians questions. Plus you get to hang out with a pretty great group of fellow volunteers once a month. So that’s pretty cool.

Do you love your two-wheel ride? Are you passionate about making Seattle a place that is safe and easy for people who bike?

The Seattle Bicycle Advisory Board (SBAB) is seeking at least three new members.

Created in 1977 by our City Council, the volunteer board plays an influential role in achieving Seattle’s Bicycle Master Plan vision that riding a bicycle is a comfortable and integral part of daily life in Seattle for people of all ages and abilities

Here are a few other tasks that members do:

Submit a resume and cover letter via email by July 28, 2019 to Serena Lehman at [email protected].