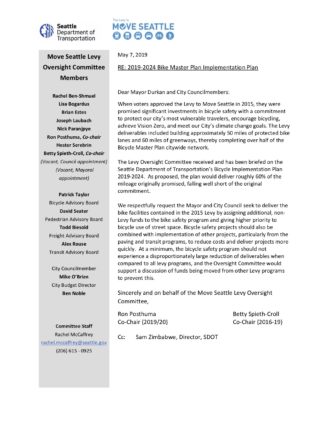 The committee tasked with watchdogging the city’s delivery of the $930 million voters approved through the 2015 Move Seattle levy has written a strong letter of concern about the lack of bicycle network progress and SDOT’s big cuts to the bike plan for the duration of the levy.

“We respectfully request the Mayor and City Council seek to deliver the bike facilities contained in the 2015 Levy by assigning additional, non-Levy funds to the bike safety program and giving higher priority to bicycle use of street space,” the committee wrote in a letter last week to Mayor Jenny Durkan, the City Council and SDOT Director Sam Zimbabwe.

This is a big deal. This committee was created by voters as part of the levy vote to make sure the city was spending this money for the voter-approved purposes. And the committee sees the mayor’s bike plan cuts as “a disproportionately large reduction” to the bicycle safety program.

The levy was approved 59–41, and the bicycle plan goals were very clear. Under the mayor’s new, massively-cut plan, only 60% of the levy’s bike program promises would be fulfilled assuming every mile included in her plan is constructed.

There is room here to talk about mileage vs impact, and the Seattle Bicycle Advisory Board (“SBAB”) has been open to missing the mileage goals if needed in order to fully complete difficult and more expensive connections instead (like downtown, SODO and major SE Seattle projects). But the mayor’s plan cuts mileage while also shying away from many of the most difficult and impactful connections, and the city oversight and advisory boards are calling foul.

SDOT and the Mayor’s Office has touted their slashed bike plan as only a draft with a final version due to the City Council in the coming weeks. This is the first short-term bike plan annual update produced under Mayor Durkan after her administration failed to deliver a 2018 short-term plan (I have requested a copy of the never-released 2018 plan, but have not yet received it). The feedback has been clear: The next version of it needs to be much more bold than the first draft. Advocacy organizations and SBAB have even suggested big projects she could restore or add to show she’s serious about making progress on bike safety and mobility. The ball is in her court.

Here’s the text of the Move Seattle Levy Oversight Committee letter (you can also see the official PDF):

When voters approved the Levy to Move Seattle in 2015, they were promised significant investments in bicycle safety with a commitment to protect our city’s most vulnerable travelers, encourage bicycling, achieve Vision Zero, and meet our City’s climate change goals. The Levy deliverables included building approximately 50 miles of protected bike lanes and 60 miles of greenways, thereby completing over half of the Bicycle Master Plan citywide network.

The Levy Oversight Committee received and has been briefed on the Seattle Department of Transportation’s Bicycle Implementation Plan 2019-2024. As proposed, the plan would deliver roughly 60% of the mileage originally promised, falling well short of the original commitment.

We respectfully request the Mayor and City Council seek to deliver the bike facilities contained in the 2015 Levy by assigning additional, non-Levy funds to the bike safety program and giving higher priority to bicycle use of street space. Bicycle safety projects should also be combined with implementation of other projects, particularly from the paving and transit programs, to reduce costs and deliver projects more quickly. At a minimum, the bicycle safety program should not experience a disproportionately large reduction of deliverables when compared to all levy programs, and the Oversight Committee would support a discussion of funds being moved from other Levy programs to prevent this.

Sincerely and on behalf of the Move Seattle Levy Oversight Committee,