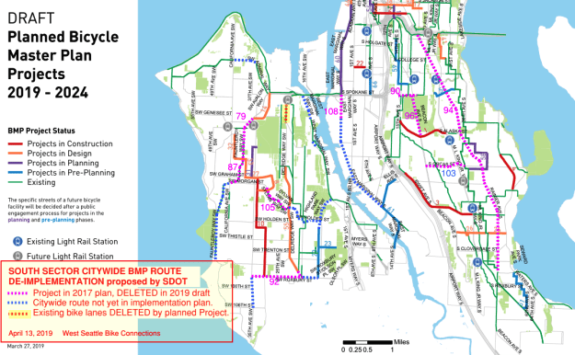 Neighborhoods all over Seattle have been hit hard by Mayor Jenny Durkan’s proposed bike plan cuts. And as is depressingly typical, West Seattle got hit especially hard. They already had lackluster improvements in the previous version of the bike plan, but the latest version cuts the remaining big improvements, like vital Fauntleroy Way and Roxbury St bike lanes.

Let’s tell SDOT to stop backpedaling. We voted for, we are paying for, and we all need safe streets now. Essential for safety, connectivity, equity, and for Seattle to meet it’s Climate Action Plan and Vision Zero goals.

Unable to attend a meeting? Send comments to [email protected] by April 30, 2019.

You can attend an upcoming SDOT open house to push back against the proposed cuts:

Cascade Bicycle Club is also trying to turn out people at these open houses, and they have a list of priorities they want to see protected or restored: 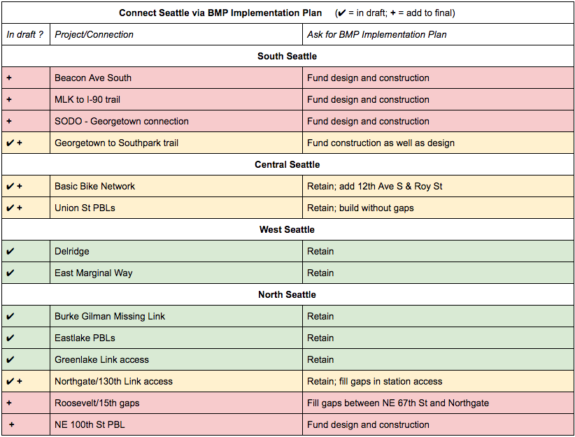 The plan is a decision point between incrementalism and acting with urgency.

Do we invest in a few key, and – let’s be real – challenging projects between now and 2024, to create meaningful connectivity around new light rail stations and along key corridors where people already bike in high numbers, despite dangerous conditions? We say yes. Add your voice at an upcoming open house.

Another decision: should half the city remain disconnected by bike from nearby neighborhoods, downtown and the rest of the city, and without meaningful places to safely and comfortably travel by bike. We say no. We need to fund – as one of the highest priorities – a South East Seattle connection on Beacon Ave S. Stand with us this month.

Don’t get us wrong; it’s not all bad. This draft plan gets some of the bike network right – like completing the Burke Gilman Missing Link, advancing almost all of the Basic Bike Network on an accelerated timeline (read that again!!), keeping on track a handful of important projects across the city – from Eastlake, to East Marginal Way, to Delridge. But we need to go further. And if the city is willing to seek grant funding – a promise to voters that underpinned the goals of the Move Seattle Levy – we absolutely can go farther towards a city where biking is a viable option for all – not just the bravest of souls. Adding a handful of projects will connect Seattle by bike.