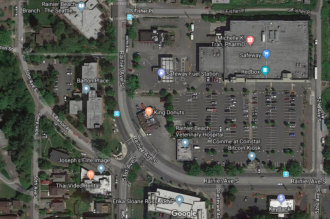 The 9200 block of Rainier includes this curve just south of the Safeway and Rainier Beach Branch Library. Image from Google Maps.

A man biking across Rainier Ave was killed Monday evening when someone driving a white sedan struck him and fled the scene, according to Seattle Police. The suspect is still on the loose.

The man’s identity and age have not been released. Our condolences to his friends and family.

Police said in a blotter post that the victim was riding his bike across Rainier Ave S in the 9200 block, which includes a wide curve in the busy and notoriously dangerous street just south of the Safeway and Rainier Beach Branch Library.

Police did not release any more specifics about the circumstances of the collision. Other media reports suggest it happened near Sturtevant Ave S near the south end of the curve. The suspect’s white sedan should have “extensive damage to the front end and windshield.” Anyone with information should call the SPD non-emergency line at 206-625-5011.

This is the same block where someone struck and killed Kao Saeteurn while he was trying to cross the street on foot just over a year ago. That suspect also fled the scene. 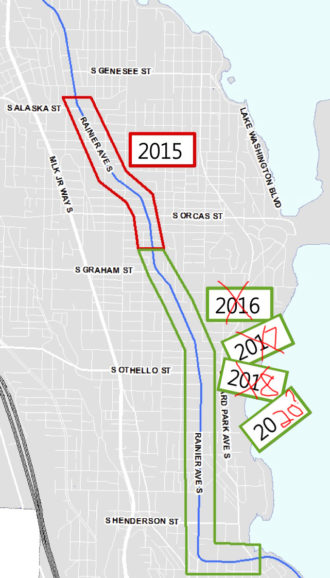 This stretch of Rainier Ave was supposed to receive a safety redesign in 2016, but city leaders have delayed that project for three years now despite consistent neighborhood outcry. Neighbors renewed their calls for the city to complete the Rainier Ave Road Safety Corridor Project last summer after someone driving struck and injured two kids at Rainier and Henderson, just a couple blocks north of Monday’s fatal collision.

Mayor Durkan did rush out a few small changes to that intersection after neighbors held a rally to demand safety changes to the street, but she and SDOT have continued to delay the full safety project.

Serious and fatal collisions were nearly eliminated after a wildly successful safety project on Rainier Ave between Columbia City and Hillman City, which makes it that much more infuriating that the city still has not completed the safety project. We can see that it works, yet the city still does not even plan to fix it for another year. And that’s assuming it doesn’t get pushed back again.

It’s way to early to know whether the city’s safety project could have prevented Monday’s collision. There just aren’t enough details. But we know that this stretch of Rainier is deadly, especially this block. And we know that we can redesign the street to reduce speeding, serious injuries and deaths. It is simply unethical for the city to ignore this safety problem the way they have. At this point, it’s a dereliction of the city’s basic duty to protect the well-being of its residents.

Detectives are investigating after a man was struck and killed in a hit and run while riding his bike in the Rainier Beach neighborhood Monday evening.

Officers were dispatched to the 9200 block of Rainier Avenue South at 4:50 p.m. Monday for a report of a white sedan that had struck a bicyclist and then fled the scene.

Witnesses said the bicyclist was attempting to cross Rainier Avenue South when he was hit by the sedan which was traveling in the southbound lanes.

Traffic Collision Detectives are now investigating and are searching for a white sedan with extensive damage to the front end and windshield.  If you have any information please call the non-emergency line at 206-625-5011.

This remains an active scene and details may change as the investigation continues.