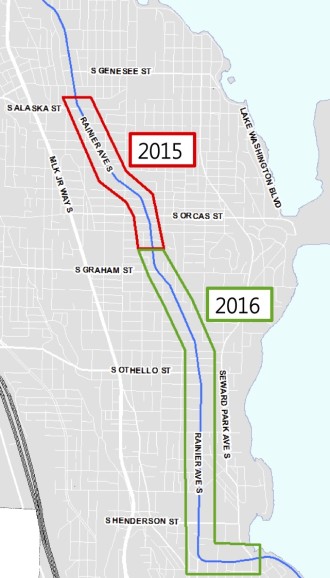 In an attempt to stop the flow of people from Rainier Ave to the emergency room, crews are finally out redesigning Seattle’s most dangerous street to be calmer, more efficient and more intuitive for everyone.

The changes were announced last week at a packed (and swelteringly hot) community open house (see this South Seattle Emerald story for coverage of that meeting).

And on Monday, just days later, crews were already out working to repaint the roadway and make other safety improvements.

It’s kind of hard to believe changes are really happening on Rainier. Though people have been asking for safety improvements for a long time, demands for real action always seemed to just bounce off City Hall. Rainier, it seemed, was just too big to fix. City leaders were either too scared to push for meaningful changes or they just didn’t care.

But that changed when neighbors got organized and got loud. With organizational leadership from Rainier Valley Greenways, Bike Works and Cascade Bicycle Club, the call for safe streets in Rainier Valley got far too loud to ignore. Councilmember Bruce Harrell — who is currently in a race for the city’s Council District 2 that includes Rainier Ave — made safety on the street a priority.

Mayor Ed Murray and his transportation team also took the job on through the city’s Road Safety Corridor program, which studies the city’s most dangerous streets and outlines immediate and long-term changes to improve safety. Those changes began Monday, with a pilot section (one mile from S Alaska St to S Kenny St) scheduled for completion by August 14. 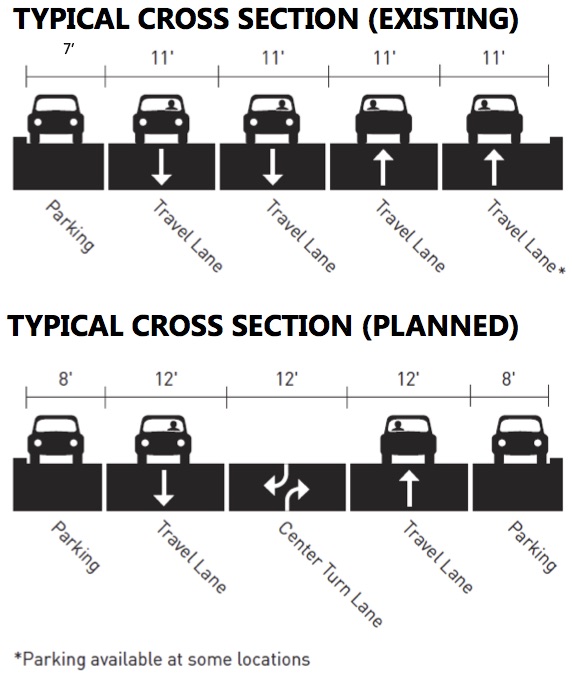 Though ostensibly bike-focused groups (and this blog) played a significant role in helping to push for these changes, no bike lanes are planned in the near-term. But on-street parking was added. Yes, that’s right, biking and safe streets advocates helped add car parking to a street.

In this case, car parking is a quick and easy way to narrow the effective road width, which helps calm traffic and prevent dangerous passing moves. And since this project is a pilot project enacted on a fairly short timeline, this is a huge step in the right direction that will prevent collisions and injuries.

Of course I’m disappointed that bike lanes are not going to be included in this phase of work, especially since there is no bike route alternative to Rainier (stay tuned for an update on the north-south Rainier Valley Neighborhood Greenway). One huge benefit of safe streets projects should be expanding transportation options for people who live, work or play in the area. A Rainier Ave with safe and comfortable bike lanes would transform affordable and healthy mobility in the area.

I’m also a little concerned about how wide the new lanes are. Studies have shown that wide lanes increase speeding and other dangerous behaviors. For example, will having 12-foot travel lanes and a 12-foot center turn lane lead to people passing dangerously in the “suicide lane?” I hope the city monitors this closely and is ready to make changes if they don’t see as big a safety improvement as they hoped.

The city should outline a schedule for planning and funding quality bike lanes on Rainier. We can’t let them slip off into the “maybe some day” folder at City Hall.

But in the meantime, I’m just so ecstatic the city is finally taking serious action on Rainier Ave. Maybe once the excitement wear off, this will seem like a big missed opportunity. But right now, I just can’t allow the perfect to be the enemy of the OMG-the-city-is-actually-finally-doing-something-to-make-Rainier-safer.

For more details on the planned work, check out this presentation from last week’s open house (PDF). 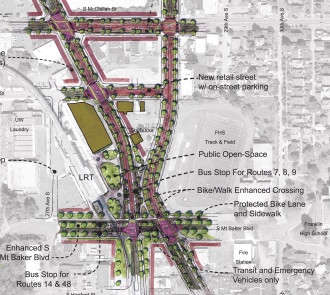 One bold plan to completely redesign the intersection of Rainier and MLK could also set the stage for quality bike lanes on both MLK and Rainier Ave through the entire Rainier Valley neighborhood. We have written about the Accessible Mount Baker project before, but it has since been earmarked for some funding in the Move Seattle levy (yet another reason to pass it!).