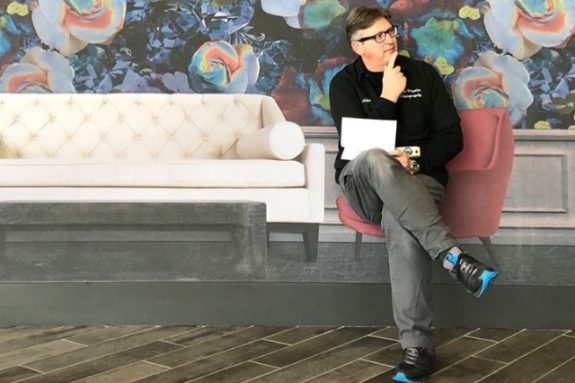 Photo of Alex Hayden from a GoFundMe campaign set up to support his family.

Alex Hayden was a husband and father of two who Gray Magazine described as “kind, funny, creative, and a true editorial photographer” in a memorial post.

Someone driving a pickup truck struck Hayden from behind while he rode in the bike lane on Rainier Ave just south of the Seattle city limits Saturday. The person driving fled the scene, dragging his bike down the street. Hayden died Tuesday from his injuries.

The King County Sheriff’s Office says a 51-year-old woman suspected in the hit and run has turned herself in. She has not yet been charged, and the Sheriff’s Office is still searching for a passenger who was reportedly in the truck at the time of the collision.

Hayden has not yet been identified officially, but word of his death has spread quickly as people impacted by his life learned the terrible news. Friends established a GoFundMe campaign to support his family.

According to the Sheriff’s Office, Hayden was biking south on Rainier Ave S in Skyway around 4:30 p.m. when the person driving the pickup struck him from behind in the 10600 block. The suspect then continued a little further before turning onto S Lakeridge Dr. Officers later found the pickup in SeaTac. A suspect was turned herself in Sunday, about 20 hours after the collision. We are not naming the suspect because charges have not yet been filed. She is in King County jail on $100,000 bail for investigation of felony hit and run.