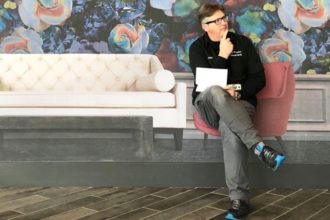 Photo of Alex Hayden from a GoFundMe campaign set up to support his family.

Chrystal Barber, 51, was sentenced to seven and a half years in prison after she pleaded guilty to striking and killing Alex Hayden, 50, with her aunt’s red pickup truck on Rainier Ave S last July. After veering into the bike lane and hitting Hayden from behind, Barber kept driving, dragging his bike down the Skyway section of the street.

Hayden was a photographer and father of two. His wife Susan spoke about his last day during the sentencing hearing, Neal McNamara at Patch reported:

When it was Susan Hayden’s turn to address [King County Superior Court Judge Laura] Inveen, she talked about the day her husband went out on his last bike ride. He finished up some household chores and then announced he was going to enjoy the rest of that sunny day doing something he loved.

Reflecting on the possibility that Barber could spend almost a decade in a jail, she told Inveen that she would gladly wait that long if it meant Alex would come back.

“I would like to keep my community safe,” she said. “Maybe she can’t get better.”

As McNamara reported from the hearing, much of the discussion concerned Barber’s history of alcoholism and five previous DUIs. She also has four previous conviction for driving without a valid license and one for driving without a required ignition interlock device. Though Barber denies being under the influence when she killed Hayden, she was not supposed to be driving at all due to her previous convictions.

Barber turned herself in and pleaded guilty to vehicular homicide, which is sadly more than can be said for far too many people who injure or kill people on our streets and then flee the scene. Far too many victims and loved ones do not even get a chance to know the person responsible has faced any legal consequences for their actions.

But this conviction and prison sentence doesn’t fix what happened, and her history of DUIs and illegal driving highlights how ineffective our system is at preventing repeat intoxicated driving. A long prison sentence after a repeat offender has finally killed someone is too late.

Ninety months is about the middle of the normal sentencing range for vehicular homicide, a felony that could carry a sentence as high as ten years.

Our condolences to Alex’s friends and family.

6 Responses to Chrystal Barber sentenced to 7.5 years for hit-and-run killing of Alex Hayden