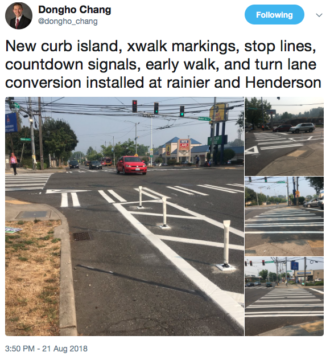 Just 12 days after someone driving struck and seriously injured two kids crossing the street at Rainier Ave and Henderson St, SDOT crews were out making significant temporary safety improvements to the wide intersection.

“What happened was an incredible tragedy for the children, for the family, for the people they knew and loved,” Mayor Durkan said during the Saturday event, according to the Seattle Times. “We the city have to stand up, take notice, and make sure we’re doing all we can to make every community safer.”

It is very exciting to see Mayor Durkan respond to this tragedy with action. So often, people are killed or seriously injured on our streets, and we do nothing. Just in December, Kao Saeteurn was killed just a few blocks from this intersection by someone who drove away from the scene and left him on the street.

While these and future safety changes cannot go back in time to stop what has already happened, they can prevent similar collisions in the future. As Times reporter Mike Lindblom noticed during the talk, potentially dangerous situations occur all day long on this street because the road just isn’t designed with safety as its top priority:

During the mayor’s talk, an elderly man with a cane couldn’t make it across Henderson before his walk signal expired. A driver rolled past him two feet away. Others ran a left-turn signal, or sped through the crosswalks.

A third girl was injured there in May, said Rainier Beach High School science teacher Jennifer Goldman. “It was the day before Ramadan. She explained to the students what Ramadan meant to her, and an hour later she was at Harborview.”

The immediate changes that are already complete or in process will help, but Rainier Ave S needs so much more work before it is safe for everyone who uses it. You can still sign Seattle Neighborhood Greenways’ petition calling for both immediate changes at this intersection and to quickly finish the whole Rainier Ave safety project.

While it shouldn’t take a tragedy to get quick action from SDOT and the Mayor’s Office, hopefully this is just the start of a more urgent attitude toward traffic safety at City Hall. There is so much work to do, and SDOT staff has shown they can do a lot very quickly when the Mayor gives them the go-ahead and the political cover to make it happen.