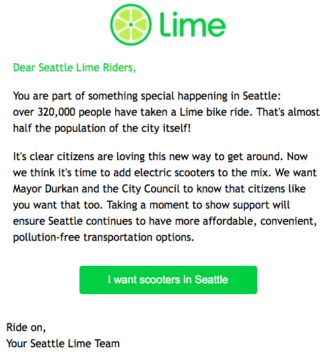 An email to Lime users.

Lime launched a digital campaign Wednesday to encourage its users to contact Seattle city leaders and ask them to allow scooter share. In just one day, the company says more than 3,000 people have done so.

Before ofo and Spin left town in July, people in Seattle were taking more than 200,000 bike share trips a month. But Lime reports that in markets that have both bikes and scooters, the scooters each get several times more use per day than the bikes. So there is big potential for scooters to carry a lot of trips, and all the city needs to do is write up some permit rules to allow them.

“Especially given impending major traffic challenges, we are committed to providing last mile mobility choices to this community and believe scooters should be a part of that,” said Lime’s Washington State General Manager Isaac Gross in an emailed statement. “Clearly, Seattleites agree.”

At a time when Seattle is bracing for a traffic crunch downtown as buses get kicked out of the tunnel and the Viaduct closes, Mayor Jenny Durkan has proposed spending millions in an attempt to reduce traffic through fancy signal timing over the next couple years (hopefully they won’t just steal time from people walking like on Mercer Street). But when there are just too many cars, you can’t fix that with traffic signals. You need people to get around without cars.

So why is scooter share still illegal? It does not require any investment from the city and has the potential to carry hundreds of thousands of trips per month. Scooters can expand the reach of transit by giving people an easy, quick and cheap way to get to and from transit stations.

Seattle was a leader in launching bike share, but the city has fallen behind when we need alternatives to driving more than ever.

Founder and Editor of Seattle Bike Blog.
View all posts by Tom Fucoloro →
This entry was posted in news and tagged bike share, limebike, scooter share. Bookmark the permalink.