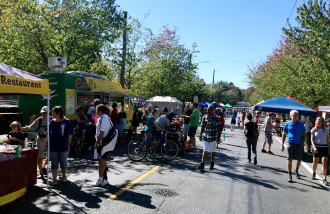 Summer Parkways on Cherry Street in 2015.

Streets are not just for transportation, they are also places where city life happens. But Mayor Jenny Durkan’s proposed budget apparently doesn’t see them that way, because it eliminates the city’s modest open streets and pavement-to-parks budgets.

But the budget is not all bad news. It does include significant increases in sidewalk repair and new sidewalks. And it includes a very big increase in funding and staff for building curb cuts, though that is not exactly coming from the goodness of the Mayor’s heart. The city settled a lawsuit last year requiring them to build thousands of new curb cuts. But still, this is exciting to see in action.

The budget also includes $1.1M more for the Northgate Bridge, $1.4M increase for neighborhood greenways near schools and $500K for community-requested lighting upgrades along a planned King Street neighborhood greenway. The city will also spend $1M on a congestion pricing study. Funds for building the Ballard Missing Link are preserved, though the trail opponents’ appeal is still working its way through King County Superior Court. The latest court schedule has pushed oral arguments into December.

The 2018 Summer Parkways events already quietly did not happen, so perhaps it is not much of a surprise to see that reflected in the budget for next year. This will not affect Bicycle Sundays on Lake Washington Boulevard, which is run by the Parks District. But it’s a shame to see the city give up on what could be an amazing community-building use of our streets after just a handful of tries. Sure, the first few tries didn’t take off like Portland’s incredible Sunday Parkways program, but I wish the city dedicated itself to revamping the event and trying different ideas rather than throwing in the towel. Plans were in the works for a bigger downtown Civlovia-style event before the program was cancelled.

If folks are inspired by major open streets events like Ciclovia in Bogota or CicLAvia in Los Angeles, now is a good time to get organized. The city is clearly not in the mood to organize such a project itself, so it’s up to the people to get together and create a vision for an amazing Seattle street party supported by city funding. Because building community is a vital use our public spaces and worthy of SDOT funding.

The City Council will now have a chance to make changes to the Mayor’s budget. The Council should consider implementing some oversight and/or guidance for the signal timing and so-called Intelligent Transportation System programs to make sure these investments help or at least do not negatively impact transit, walking and biking efficiency.  The Mayor’s budget includes funding for signal timing changes as a way to mitigate SR-99 viaduct and tunnel changes, which is not itself a problem. Traffic patterns will change, and this will require new signal timing. But some of the city’s recent efforts to improve traffic through signal timing, like Mercer Street, has resulted in big negative impacts to people on foot and all the people on cross-streets by car, bus, bike or foot. We need to be sure the signal changes don’t simply steal time from other road users and give it to our freeway-bound city streets.

The Council should also look into whether they want to save the pavement-to-parks program, which has created some very interesting new public spaces for relatively little money. In most cases, the pavement-to-parks projects utilize excess street space that had previously made crosswalks more dangerous and traffic movements more complex. By turning some highway-style “slip lanes” into parks, for example, SDOT has created public space while also eliminating extra crossings for people on foot. The city has also used pavement parks to simplify intersections, such as the odd, wide intersections created by diagonal streets such as Denny Way. The changes rarely have significant impacts to traffic and can even improve traffic by removing conflicts and confusion. For example, this Taylor Ave park makes traffic flow much more simple while dramatically shortening crossing distances for people on foot. And it looks great: 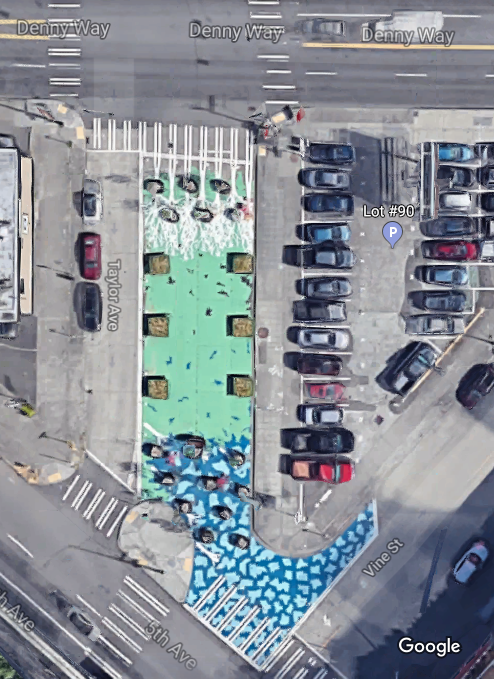 Or this big slip lane removal up in Roosevelt. Note that people driving can still go right from 65th to 8th just fine, but now people on foot have one fewer street to cross and a new space to hang out: 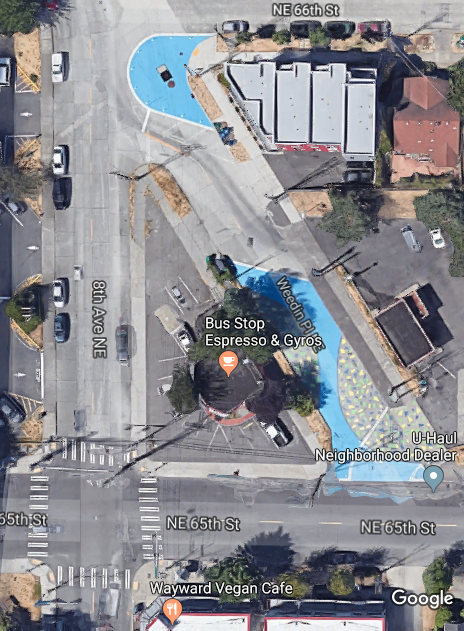 And, of course, there’s Arcade Park.

It’s sad to see the city on the verge of rolling back what seems like a cost-effective and creative way to increase public space and improve traffic safety at the same time. This is a program worth saving, and an example of SDOT doing great work for relatively little funding.

And, of course, the Council should discuss open streets events. Should they save Summer Parkways? Should they include funding to study a different open streets concept? Or should they just let it go? I suppose this is a good topic for you all to discuss in the comments below.

Below is the list of the Mayor’s proposed changes to the SDOT budget (more details in this PDF): 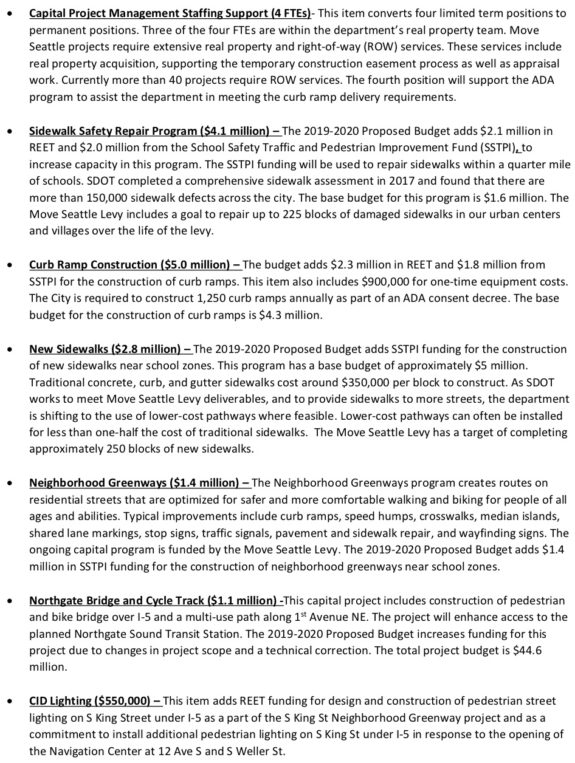 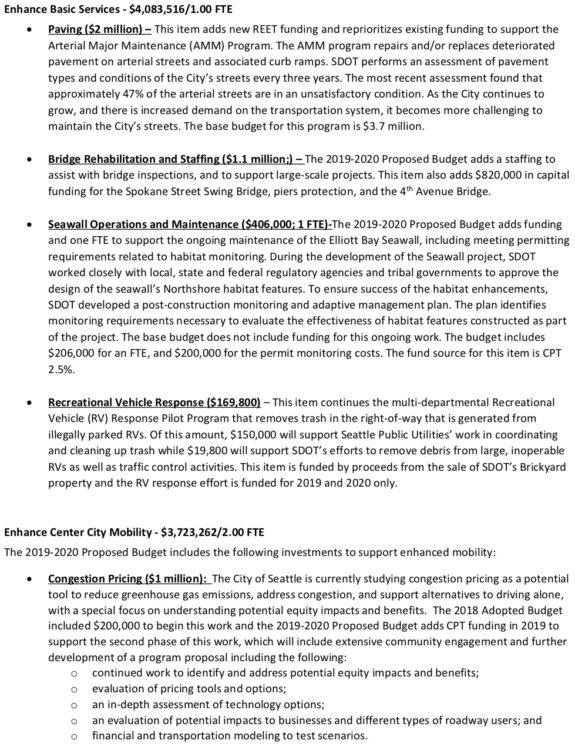 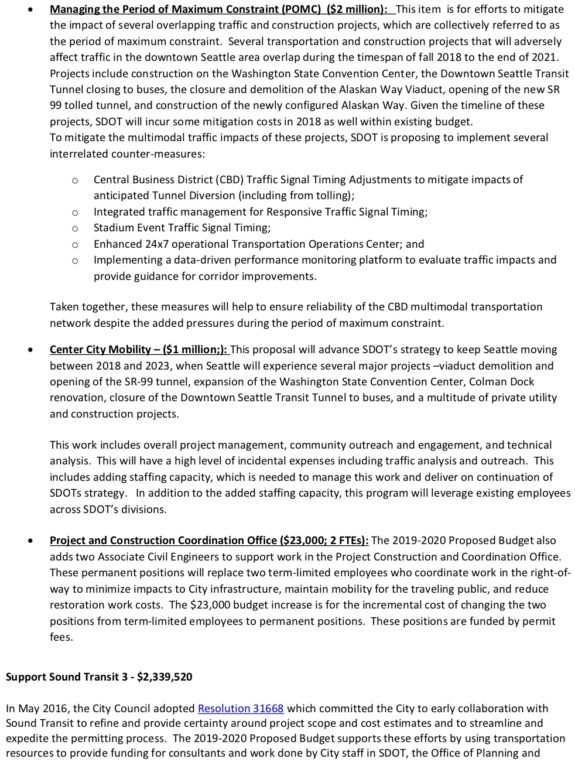 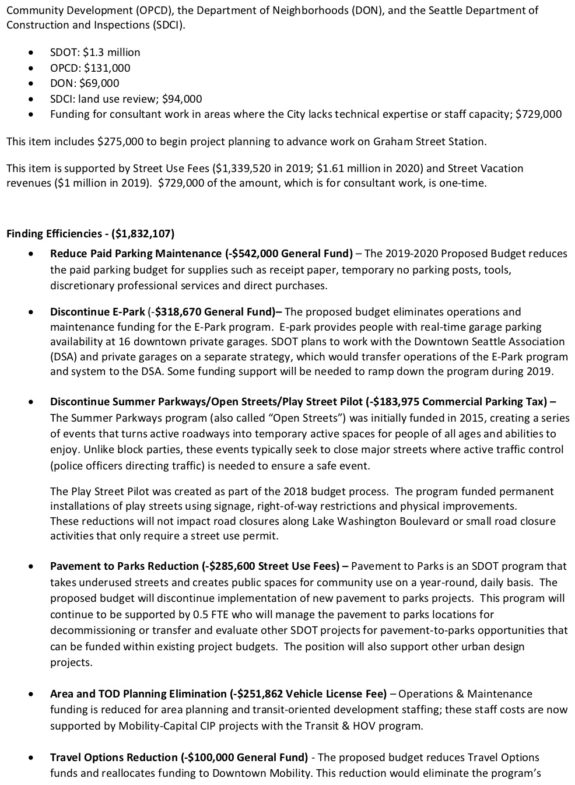 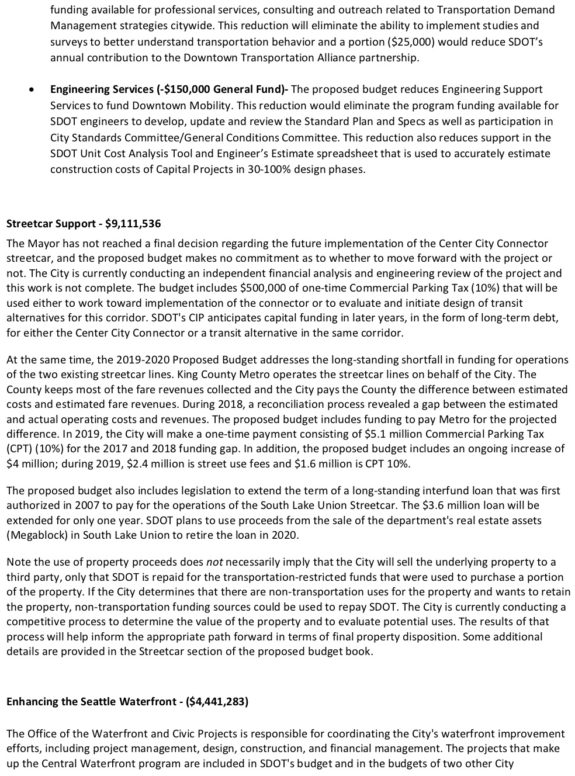 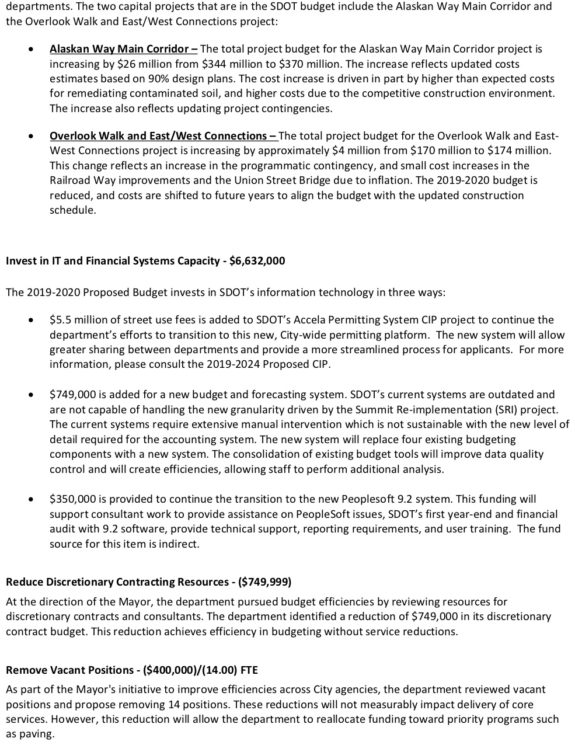 Founder and Editor of Seattle Bike Blog.
View all posts by Tom Fucoloro →
This entry was posted in news and tagged ciclovia, jenny durkan, pavement to parks, summer parkways. Bookmark the permalink.