Seattle’s next bike share battle could be between Lime, Uber and Lyft + Let’s start a scooter pilot 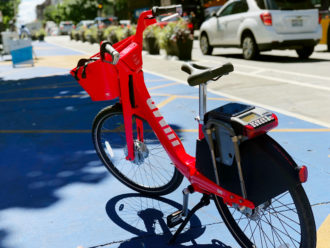 Uber-owned Jump has applied to operate in Seattle alongside Lime and Lyft-owned Motivate.

Though it’s been scaling back its efforts for a while now, Spin has officially announced an end to its bike share service in Seattle. Citing an increase in fees and the decision not to include scooters in the city’s updated permit, Spin will not be applying for the next year of operations.

With ofo already leading the way out of town, that leaves Lime as the only bike share company actively in business for the time being. So at the height of summer, Seattle is seeing a huge decrease in available bikes.

But it might not be this way for long. The Seattle Times reports that in addition to Lime, Uber-owned Jump and Lyft-owned Motivate (once the operator of Pronto Cycle Share) have both submitted permit applications to operate under Seattle’s new pricier and more regulated bike share scheme. Though the plan was to have four companies, it seems only three have applied so far.

But the city’s target is still 20,000 bikes total divided among the companies raising $1 million in permit fees per year. This seemingly arbitrary bike total means that each bike will cost $50 to permit, among the more expensive rates in the country. But at 20,000 bikes, Seattle would also have one of the largest bike share fleets in operation, many of them with electric assist.

The fact that two of Seattle’s three bike share companies are all but suspending U.S. bike share operations is one possibly worrying sign about the state of private bike share. But that is counteracted by recent investments from Uber and Lyft to become major players in U.S. bike share. In the meantime, the market for shared electric kick scooters is seemingly blowing up, an innovation Seattle has so far spurned.

There are a lot of companies competing for the huge market of urban trips that are too long for a short walk but too short to be well-served by transit or car. About half of all trips are three miles or less, so there could be a lot of money to be made if you can capture even a piece of that total. So far, companies have tried pedal bikes, e-assist bikes and electric kick scooters, each of which may have their own places in the ecosystem. But what we know for sure is that this period of innovation is not over. Who knows what the shared mobility device market will look like this time next year. 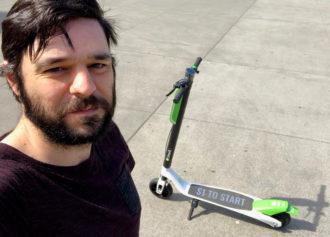 Yours truly on a Lime-S test ride.

Seattle chose not to include scooters in its recent permit. But now that the bike permit has been created and received the necessary approvals from City Council, we need to talk about scooters and whatever other devices companies might bring. Seattle was a national leader in ushering in this private bike share boom, and we should be proud of the success of that effort. But why stop here? Have we solved the car-free short distance travel problem? Have we really decided that 20,000 bikes is good enough so we should stop trying any new ideas?

Outside as I write this, the wildfire smoke haze is visible even across my small neighborhood street. Every social media feed is filled with photos of vistas obscured or people wearing their new breathing masks. The city’s solution is to tell people not to spend time outside, but there’s no plan for getting people around without cars and our existing transit. Even though cars burning gas makes the problem worse, the city has made no effort to limit driving or even offer incentives to take transit instead.

Meanwhile, there are multiple companies that want to bring electric kick scooters to town that people can rent on demand to get around without burning oil, but we won’t let them.

Like bikes, scooters can block sidewalks and create accessibility issues. But the city has a plan to alleviate that problem through a huge expansion in designated bike parking, especially on-street corrals where bikes that get knocked over won’t fall across the sidewalk. Allowing (and permitting) scooters will help the city expand that parking even further.

There is also a valid concern that people will ride the scooters on sidewalks. But the solution isn’t to ban them, the solution is to expedite building the connected network of comfortable bike lanes we already have planned. Scooters will be right at home using those bike lanes.

I had the chance a few months ago to try out a Lime-S scooter. It was zippy and easy to use. Though I still prefer the bikes, this is a personal taste kind of thing. I’m just more comfortable biking because I have been biking everywhere for years. Companies that operate scooters report huge interest from the majority of the public that does not bike everywhere they go as I and many readers of this blog do. Spin has essentially pivoted to focus on scooters, claiming they “generate more than 20 times the consumer demand than that of bikes,” according to a company statement.

SDOT should move quickly to create a permit for scooters and other non-pedaling devices in addition to the bikes. They could even make it another pilot permit the way they did when private bike share started just over a year ago. Move quickly to get them up and operational, then learn from the pilot data when creating permanent permit regulations. We already have a framework for the permit thanks to bike share, so modify that as needed to make it fit non-pedal options.

But we can’t just lean back, watch the city disappear into the smoke and consider our work providing non-car options finished.

Spin has been proud to serve Seattle, our first city, since July 2017. We have been particularly grateful to the City for welcoming us to the community and for pioneering the dockless mobility trend with us in the United States. Since our launch in Seattle, we have added electric scooters to our fleet, and we’ve found that these vehicles generate more than 20 times the consumer demand than that of bikes. We have since made the decision to focus on bringing scooters, and other forms of pedal-less electric mobility, to our markets around the country.

As SDOT formulated the new permit rules, we had hoped the requirements would allow scooters. We also expressed our concerns about the proposed requirement that all operators pay a flat fee of $250,000. We believe fees should be variable based on an operator’s fleet size, and not an arbitrarily high flat fee, with fleet expansions determined by performance. In fact, we note that every U.S. city that has adopted rules for dockless mobility operations bases fees on the operator’s actual fleet size, including Seattle until now.

Unfortunately, the City will not be allowing scooters in the new permit at this time. We were also disappointed that the City left the flat fee unchanged in the final version of the new permit requirements. In light of these realities, Spin has made the difficult decision to not apply for the bikeshare permit. Nevertheless, we intend to continue working with the City to offer our shared scooters to Seattleites soon.

19 Responses to Seattle’s next bike share battle could be between Lime, Uber and Lyft + Let’s start a scooter pilot