No, the state’s new ‘E-DUI’ law does not apply to people biking 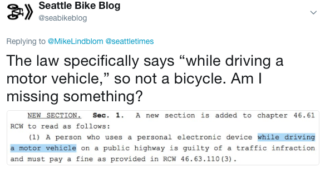 There has been a bit of confusion in recent days about whether Washington State’s new so-called E-DUI distracted driving law applies to people biking.

The Seattle Times published a story over the weekend saying explicitly that the law does apply to people biking. Shelly Baldwin, government liaison for the WA Traffic Safety Commission told Mike Lindblom of the Times that as noted in RCW 46.61.755, people biking are generally subject to all the rights and duties of people driving vehicles. Her conclusion was that this means people biking are subject to the new distracted driving law.

However, as Seattle Bike Blog pointed out on Twitter, the new law specifically says “motor vehicle,” which is different than “vehicle.” Bicycles are vehicles, but they are not motor vehicles.

The new distracted driving law is intended for motor vehicles. It does not apply to bikes or non-motorized vehicles.

“My opinion is that the law specifically refers to motor vehicles throughout,” he said. He said if anyone gets an E-DUI ticket while biking, they should fight it.

But, “just because we can text and ride doesn’t mean we should,” he said.

Due to this urging, the Times did more research and has corrected their story to confirm that the law does not apply to people biking. Thanks to Lindblom for taking another look at it and making the correction.

This distinction makes sense. Just like with DUI — WA law specifically excludes people biking, though police can impound the intoxicated person’s bike — biking while distracted and driving while distracted are on a completely different scale of danger. It might be a bad idea to bike distracted, but the potential for public danger is far, far less than if you a driving a car or truck. Motor vehicles killed 536 people in Washington last year and 40,200 people nationwide. Many times that many people were seriously injured. And distraction is a rising factor in these crashes.

There are many things that might be bad ideas, but don’t rise to the level of needing a law banning them. Laws, especially laws with police enforcement, require a serious, documented public safety need. Distracted driving easily meets this threshold. I have not seen any study showing that distracted biking, no matter how dangerous it sounds, is causing injuries to the public in Washington State.

The new law has been the subject of a lot of confusion. Lots of people seem to think the law lets police pull people over for drinking coffee while driving, which is not true. If you are so focused on your coffee that you commit another infraction, like illegal lane change, then you can now get an extra ticket for the distraction. Which makes sense. You shouldn’t be double tasking like that if you can’t drive safely while doing it. But the coffee can’t be the reason an officer pulls you over.

The main point of the law is to update our state’s previous embarrassingly outdated texting while driving law, which was written without smart phones in mind. So the old law banned texting, but not flipping through photos on Facebook or watching The Great British Bake Off on Netflix while driving. The new law — pushed by Seattle mayoral candidate Jessyn Farrell and opposed by mayoral candidate Bob Hasegawa — fixes that loophole.

9 Responses to No, the state’s new ‘E-DUI’ law does not apply to people biking