City Attorney to police: Don’t write a ticket at scene when someone walking or biking is injured 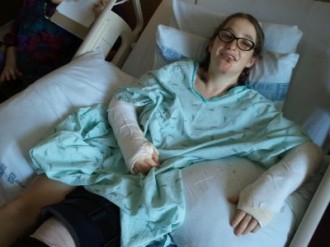 Heather fought hard through lots of misunderstanding to get the person who struck her charged under the VUL. Image via Cascade

Sometimes it feels like salt in a wound. Somebody walking or biking in town is seriously injured by someone behind the wheel, and the person driving—even if they did something wrong—does not even get a ticket at the scene.

But the Seattle City Attorney’s Office (“SCAO”) sent a memo to SPD recently explaining that this is actually the best way to utilize the state’s 2011 Vulnerable User Law, which created penalties and education requirements for people who seriously injure or kill a person while driving negligently.

A ticket at the scene can sometimes make implementing the law more difficult, according to the City Attorney. So it is actually best for officers to refer incidents to the department’s traffic collision investigators who can follow-up and learn more about the victim’s condition and better assess whether negligence was a factor in causing those injuries.

Cascade Bicycle Club, which helped work to pass the law, has been tracking implementation. Earlier this year, they reported that many law enforcement agencies are not familiar with how to use the law. Below is an excerpt of their report on the new City Attorney guidance:

“Vulnerable user citations are appropriate where a person’s non-criminal negligent driving causes serious injury or death to a “vulnerable user,” which includes essentially anyone not in a passenger car or truck…the statute encompasses a wide range of potential scenarios, including everything from cases where a defendant’s failure to yield to a pedestrian resulted in a hairline fracture, to conduct falling just short of King County’s filing standards for “dry” vehicular homicide charges ,” the memorandum states

Under the Vulnerable User Law, which Cascade worked to pass through the Washington Legislature in 2011, a driver committing a traffic infraction that results in the serious injury or death of a vulnerable roadway user will face an automatic fine of up to $5,000 and a 90-day suspension of driving privileges.

Due to the serious nature of these violations, the SCAO asks that most of these cases are not charged at the scene, but rather be referred to the Traffic Collision Investigation Squad (TCIS) for referral to the SCAO for charging.”

The SCAO’s memorandum states that the referral is particularly important because in some cases the extent of a vulnerable user victim’s injuries may not be immediately apparent to officers at the scene.

The Vulnerable User Law was needed to help fill a maddening (yet common in the US) hole in the state’s road traffic laws that prevented the justice system from imposing any serious penalties on people who were responsible for the serious injury or death of a person walking or biking. For example, if a person driving makes a traffic error like failing to yield at a crosswalk and hits a person walking across the street, so long as there was not an aggravating circumstance (intoxication, malice, criminal recklessness, etc), the person driving might just get sent home with a small ticket while the person walking goes to hospital.

For example, a likely distracted teen swerved on the shoulder of Juanita Drive and struck John Pryzychodzen in Kirkland in 2011 before the VUL went into effect. Pryzychodzen, who was known for his attention to safety while cycling, was killed. But the teen ended up with an insulting $42 ticket for “unsafe lane change.” It’s as though the fact that someone’s life ended and that the lives of his family and friends were changed forever was not relevant in the eyes of the law.

The Vulnerable User Law is somewhat brilliant because rather making negligent driving a criminal act, it is designed to make sure that the person whose negligence caused the injury or death has to take responsibility for what happened. They can lose their license for up to 90 days and pay a hefty fine of up to $5,000. Or they can appear in court, pay $250, complete a traffic safety course and complete 100 hours of relevant community service.

4 Responses to City Attorney to police: Don’t write a ticket at scene when someone walking or biking is injured