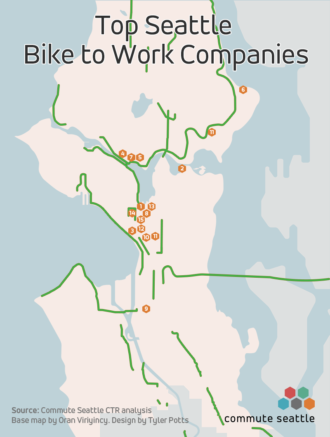 New analysis from Commute Seattle found that the city’s large workplaces (100+ employees) with the highest bike commute rates all are within five blocks of a protected bike lane or trail and offer secure bike parking.

Even more telling: The top seven workplaces were all within one block of a trail or protected bike lane. And the gap between these workplaces and the citywide bike commute average is astounding.

This in not pie-in-the-sky dreaming here. These are actual major employers getting huge bike commute rates today. And the path to building on these successes is clear: Build more safe and connected bike routes between more homes and workplaces.

And we should start by building the downtown Basic Bike Network now. The top seven workplaces are all on or connected to the Fremont Bridge and Burke-Gilman Trail. Several of them are even at the north end of South Lake Union, which is served well by Dexter and Westlake. But the lack of safe connections from the south end of Lake Union into downtown is holding back all the other center city workplaces.

There is a lot of pent-up demand waiting for a good bike lane network. With center city traffic only getting worse, a bike network is the fastest and cheapest way to provide people with another option for getting around. It’s also the fastest way to get major results.

The two outliers in the top 15 (K2 Corporation and Cascade Designs) are located deep in Sodo without many high quality bike route options, making their bike commute rates pretty remarkable. So a tip of my hat to their employees.

Commute Seattle released the latest analysis ahead of their annual Bikes & Bagels event scheduled for tomorrow (as advertised on Seattle Bike Blog). The organization will host two locations between 7 and 9 a.m. in Lake Union Park and Occidental Square. Bike by, get a free bagel, coffee and swag, and talk about how we can get more people biking to more workplaces in our city.

In a city with wet weather, steep hills, and dark winters, perhaps it isn’t surprising that most people choose not to ride their bicycles to work. According to a Commute Seattle analysis of 2016 Commute Trip Reduction (CTR) data, three percent of a typical large company’s employees ride their bikes to work.

But some Seattle employers are achieving a bike to work rate more than triple that number, and a handful are seeing more than five times the typical bike rate. Based upon a Commute Seattle review of available data, all of the Top 15 bike-to-work sites share two common characteristics:

According to Commute Seattle Executive Director Jonathan Hopkins, this impact is striking. “These employers have invested in transportation freedom for their employees. As a result, their employees will be happier, healthier and more productive. They will also save money, the environment, and congestion on our roads. If all downtown companies performed as well as Seattle’s #1 Bike to Work company, we could take 50,000 cars off downtown Seattle streets. That would cut downtown car commutes by more than half!”

What is the #1 Bike to Work Company in Seattle?

The Allen Institute leads large Seattle workplaces with 21.3 percent of commute trips made by bicycle. Allen Institute is immediately adjacent to safe bike infrastructure, namely the award-winning Westlake cycle track that delivers thousands of riders into downtown Seattle. When the South Lake Union-based bioscience company planned its move from Fremont to its new building on Mercer Street in 2015, it ensured its new facility included secure bike storage, as well as lockers and showers for bike commuters. The company also has a Bike Committee that helps plan and coordinate bike commute events and promotions. According to Trygve Bakken, an Allen Institute scientist and Bike Committee co-chair, they will even help employees map out their bike commutes, showing the ideal route and which streets to avoid.  New employees are also given an orientation that includes a tour of the bike facilities.

Details on other Top Performers

Comcast Technology Solutions, a local online video subsidiary of Comcast, is located right on the 2nd Avenue Protected Bike Lane in downtown Seattle. The company allows its bike commuters to keep their bikes by their desks or on hanging bike racks located in hallways, and also provides showers and towel service for its employees. This has led to a bike rate of over 10 percent, or more than three times the city average. “Having leaders in our company as active bike commuters also helps employees feel comfortable coming in on a bike – even when the weather is miserable,” said bike commuter Brian Hanson, Executive Director of IT.  “It promotes a healthy environment, community, and company culture, and tends to draw in quite a diverse employee base.  I think it is a key to our company’s continued success in our Seattle outpost.”

For Tableau, whose Fremont campus is located along the Burke Gilman Trail, active commuting is a way of life for many employees.  On site amenities include secure, indoor bike storage, showers with towel service, lockers for bike commuters, and an indoor bike repair station. “The bike room is full most days,” says Workplace Specialist Andrea Watanabe. “Employees really like being able to roll right in, lock up their bike, and quickly shower and change for work.”

Seattle Children’s, with its main campus across the street from the Burke Gilman Trail, offers one of the city’s more innovative employee bike benefit packages. First, the company provides a daily commute bonus, which can total $1,000 per year, for not driving alone to work. Further, any employee who commits to riding a bike to work at least twice each week can receive a company-provided bicycle and necessary gear, including helmet, lights, and lock. Seattle Children’s also has a full-service bike shop on its main campus, providing free tune-ups to employees.

Joanne Simpson, a veteran Seattle Children’s employee who has been bike commuting for over 10 years, said that these investments and policies “helped get me riding and have helped me continue riding even through the winter months.” But mostly, she feels it’s important for Children’s employees not to drive to work so that the hospital can grow to serve more patients without needing to add more employee parking. More than 1,100 Children’s employees bike to work across its multiple locations. Its worksite with the highest share of bike riders is the Jack McDonald Building, located roughly five blocks from the Dexter Bike Lane in the Denny Triangle area.

Commute Seattle recognizes top bike to work companies for making investments in employee benefits and on-site amenities, and encourages local government and neighborhood groups to continue building a citywide network of safe bike lanes. With public and private sectors working together, Seattle can increase the number of bike commuters at low cost and help relieve pressure on our congested roadways.

Commute Seattle is commissioned by the City of Seattle and King County Metro to help companies institute commuter-friendly policies, often at no cost to the company. Those interested in learning more can visit www.commuteseattle.com/go.

At the South Lake Union location, representatives from several top bike commute companies will be available to speak with the press.

Commute Seattle is a not-for-profit Transportation Management Association. Our mission is to foster mobility partnerships and services to keep Seattle moving and thriving for all. For more information about Commute Seattle, visit www.commuteseattle.com/go